41
To the beginning
Previous page
Records were made wherever and whenever possible – in dugouts, between the battles, on wallpaper, exercise books, office books…

Handwritten partisan journals were kept together with important documents. They contained facts and figures interspersed with stories about the daily grind, battles and heroes. Handmade 'books' were pepped up by pictures and unfailing sense of humor. They were circulated to raise morale. They were read to draw strength.
PAGE
Next page
208th Partisan Unit Named After Stalin
In the midst of the battles for Belarus the Communist Party and the government of the republic instructed the partisans to reinforce strikes against the retreating Nazis. During that period of the war, planning, coordination and support of partisan operations were provided by operational groups of the Belarusian command of partisan movement. They were set up at the military councils of the fronts and acted in close contact with the command of the regular troops.

As a result of joint combat operations partisans and the Red Army troops destroyed enemy garrisons, conquered heights and river crossings, liberated population settlements.
In pursuance of the resolution of the Mogilev Oblast underground committee of the Communist Party of Byelorussia and the order of the military operations group of 30 August 1943 Stalin Partisan Unit No. 208 was converted into Partisan Regiment No. 208 consisting of three battalions. The fourth battalion was set up in October 1943. It was a training reserve battalion that was reorganized into an engineer company in December 1943 and restored to its previous state in March 1944. Jointly with the 61st Army the regiment crushed the enemy garrisons in the village of Pogost and the station of Parokhonsk, and seized Luninets-Pinsk and Luninets-Telekhany motorways and unsurfaced roads that the enemy planned to use for retreat.

In line with a redisposition plan, Partisan Regiment No. 208 led by Yevlampy Bespoyasov reached Telekhany, Pinsk Oblast, where it joined the Red Army on 11 July 1944. The regiment had 1,422 partisans.
Back in 1942, Stalin Partisan Unit No. 208 let the Nazis know that they would have a hard time. The November issue of the National Avenger handwritten journal abounds in articles and essays about heroic deeds of national avengers. The essay Pride of the Unit vividly depicts soldiers and officers, who the author describes as go-getters, can-doers, and daredevils. 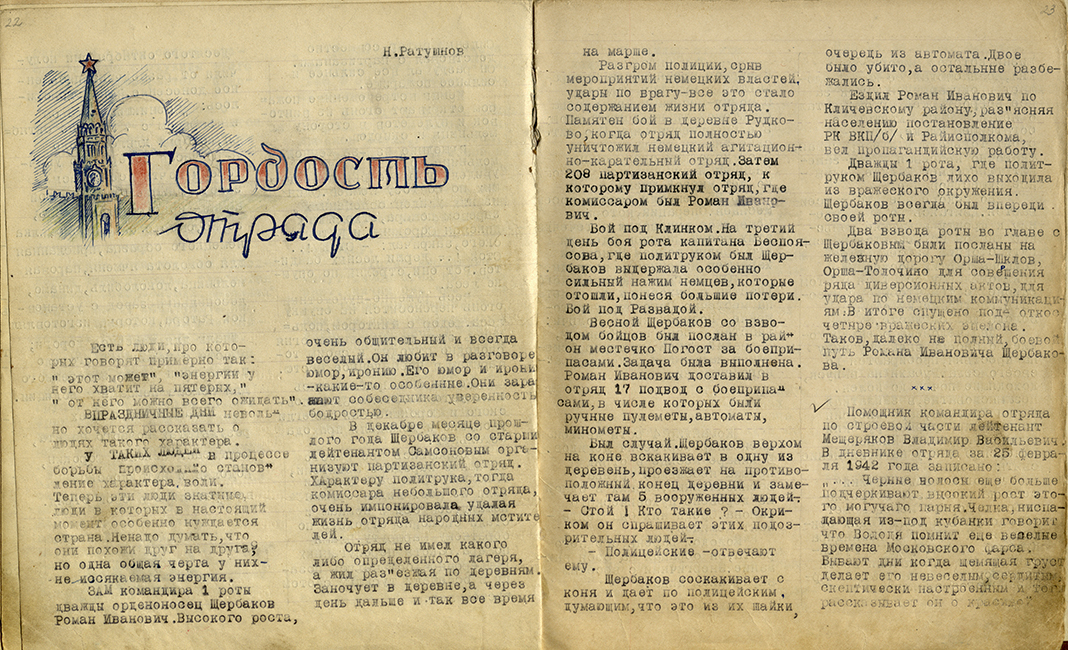 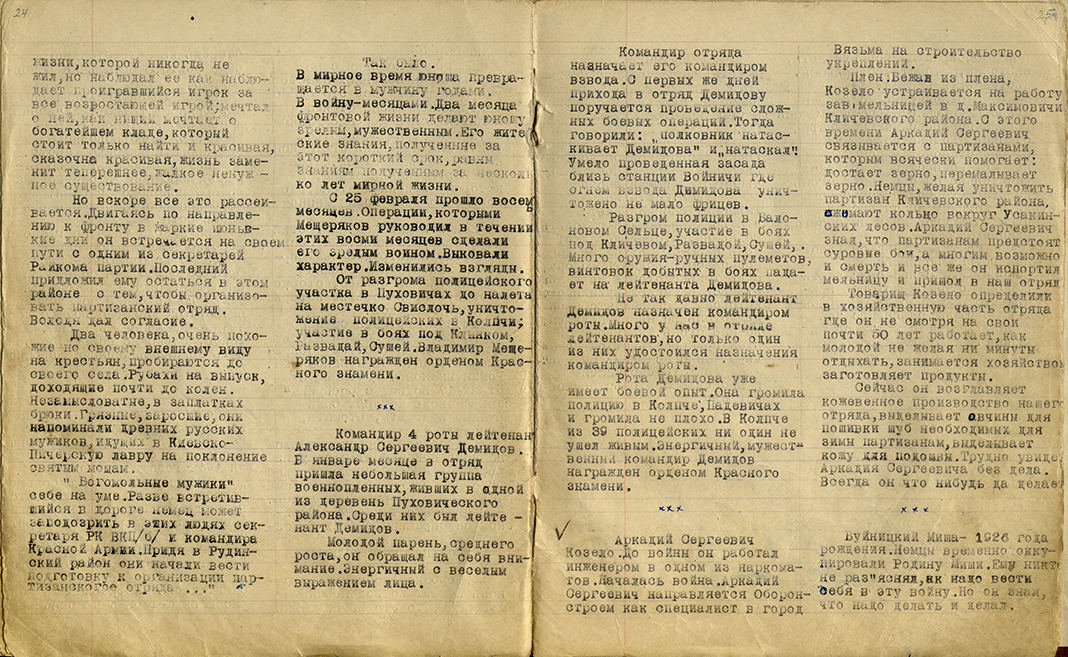 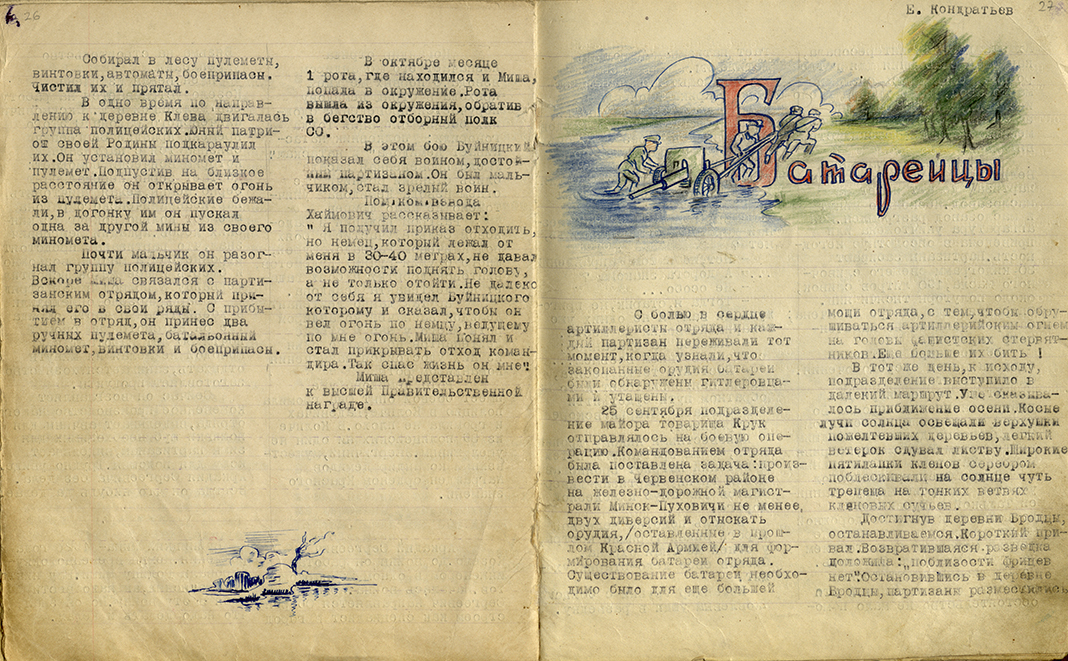 People will be people. In times of war soldiers demonstrate different attitudes: some remain calm and self-restrained, some demonstrate cold feet or cowardice. The satirical article Germans in Usakino uses satirical and grotesque forms to depict those who lost nerve. 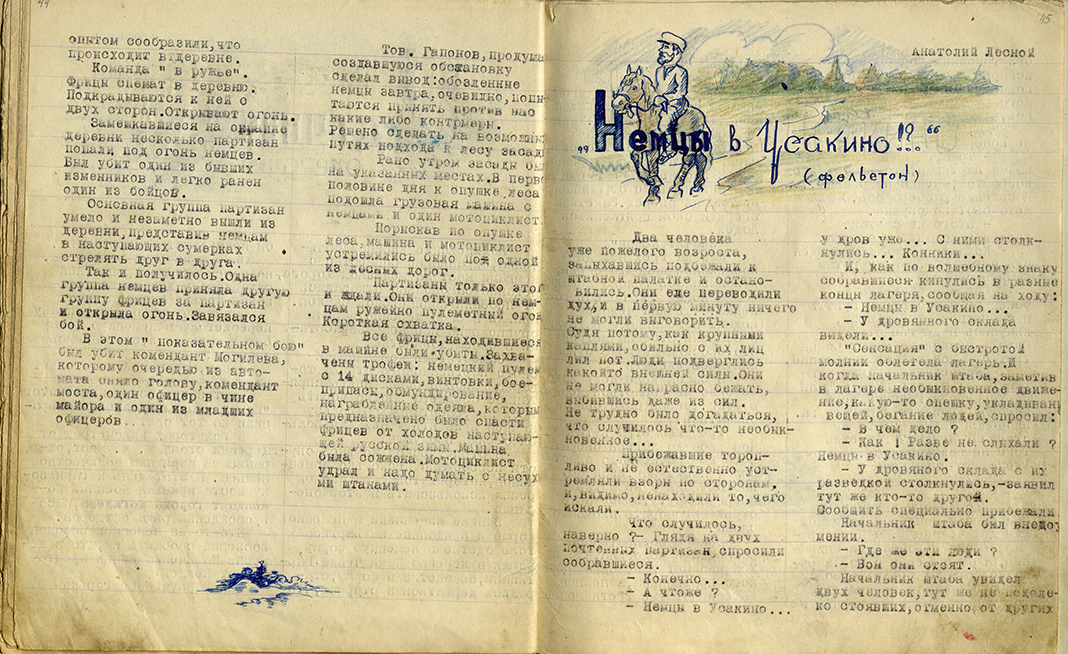 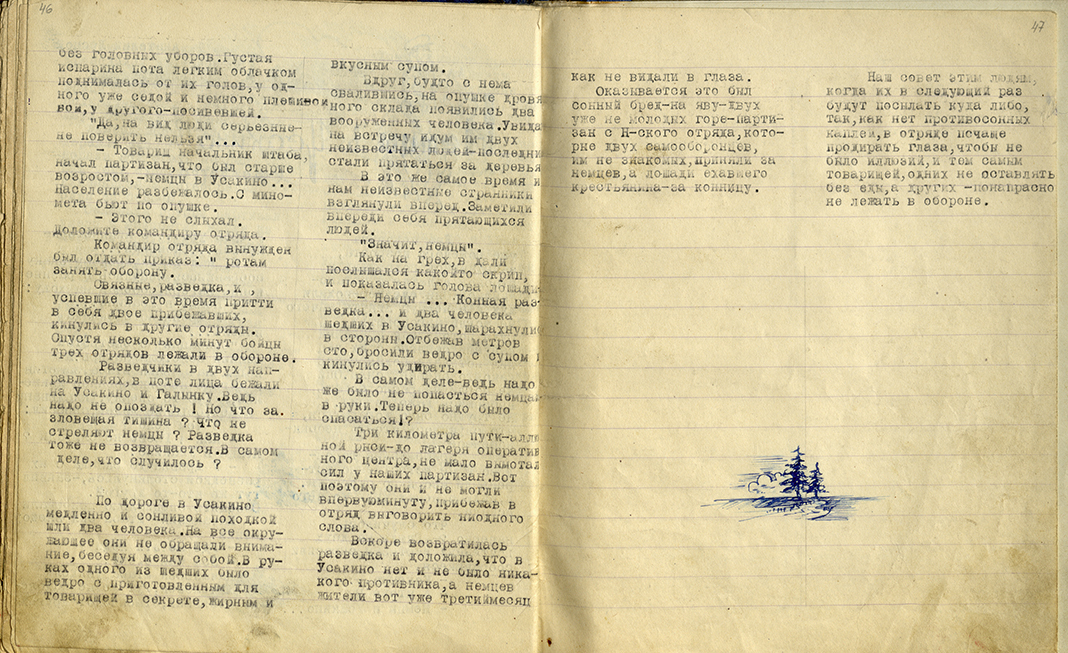 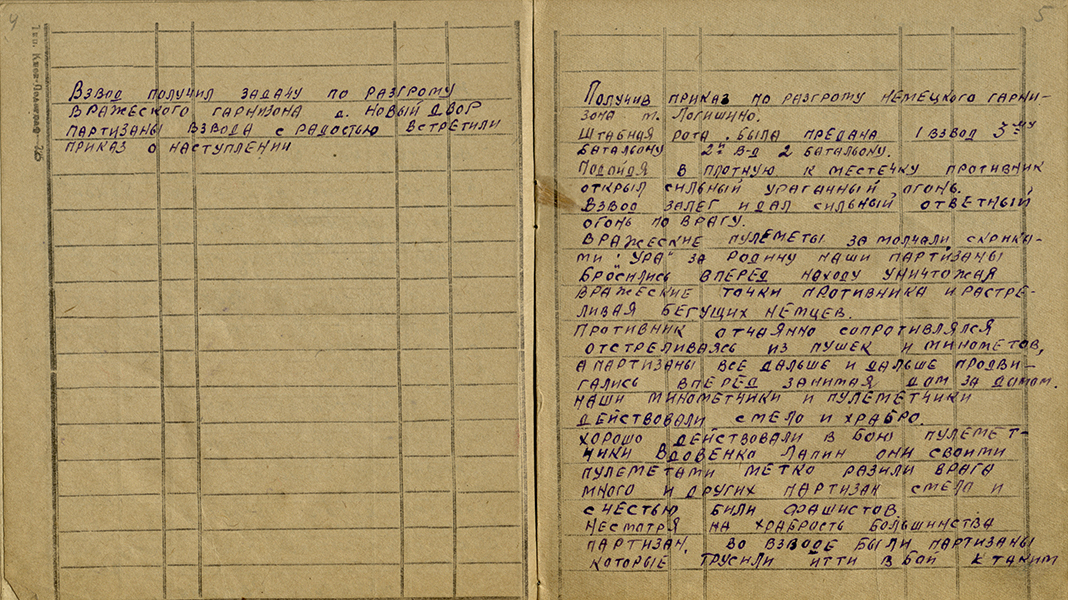 The July 1944 issue of the handwritten journal Forward for Motherland describes the destruction of a German garrison by partisans. There were some facts of cowardice despite the selflessness of the majority. The authors condemn them and make it clear that such actions were few and far between in partisan units.
The Book of Honor of Partisans-Komsomol Activists Who Distinguished Themselves in Battles Against the Nazis pictured heroic deeds of the partisans. Among them were Aleksandr Demidov, for whose head the fascists promised an award of 40,000 gold Reichsmarks, Ivan Nizhnik, who derailed eight enemy trains, Piotr Vilitkevich, who commanded an attack on the Nazi barge on the Berezina, Mikhail Khoninov, who demonstrated unprecedented courage and valor in destroying German garrisons.
After the war Mikhail Khoninov became a writer. He was a literary adviser at the Union of Writers of Kalmykia. His recollections about the war are kept in his publications. 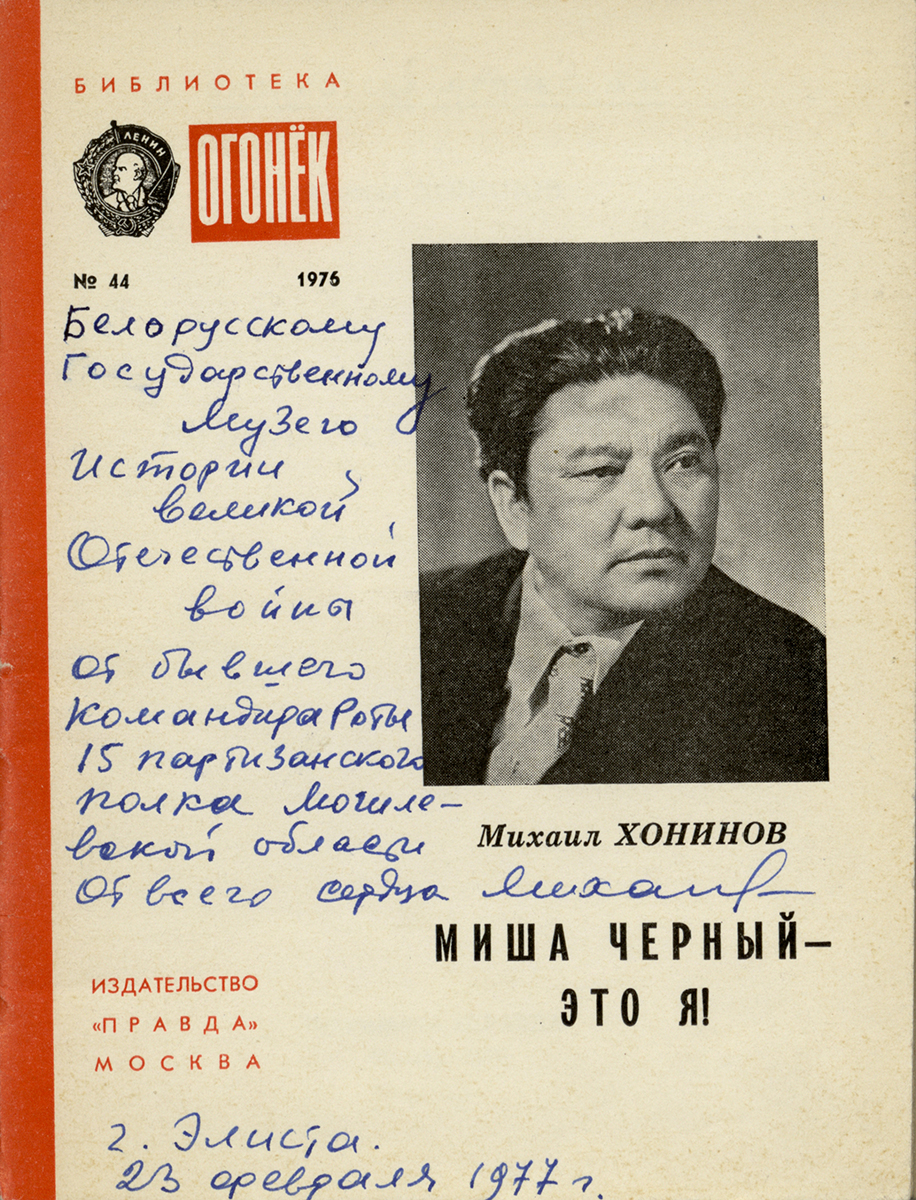 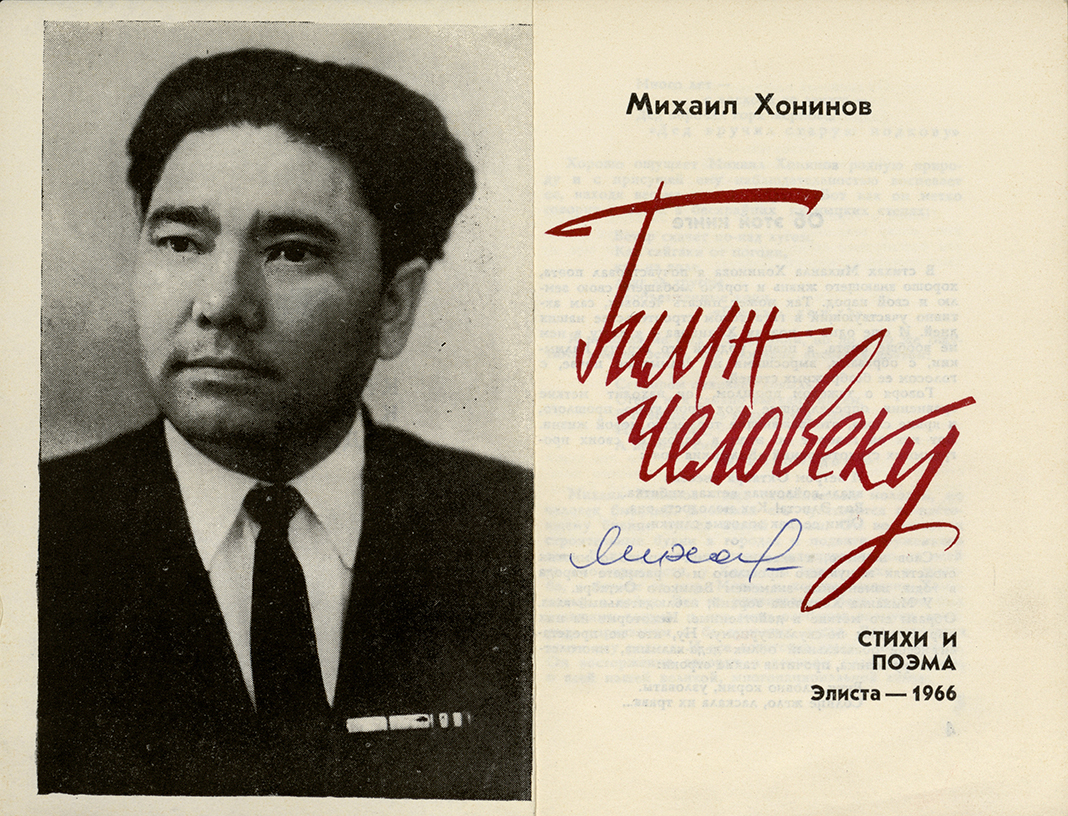 Aleksandr Demidov's documentary novel V Ataku Podnimalsya Pervym (He Was The First To Rise For An Attack) was published in 1967. 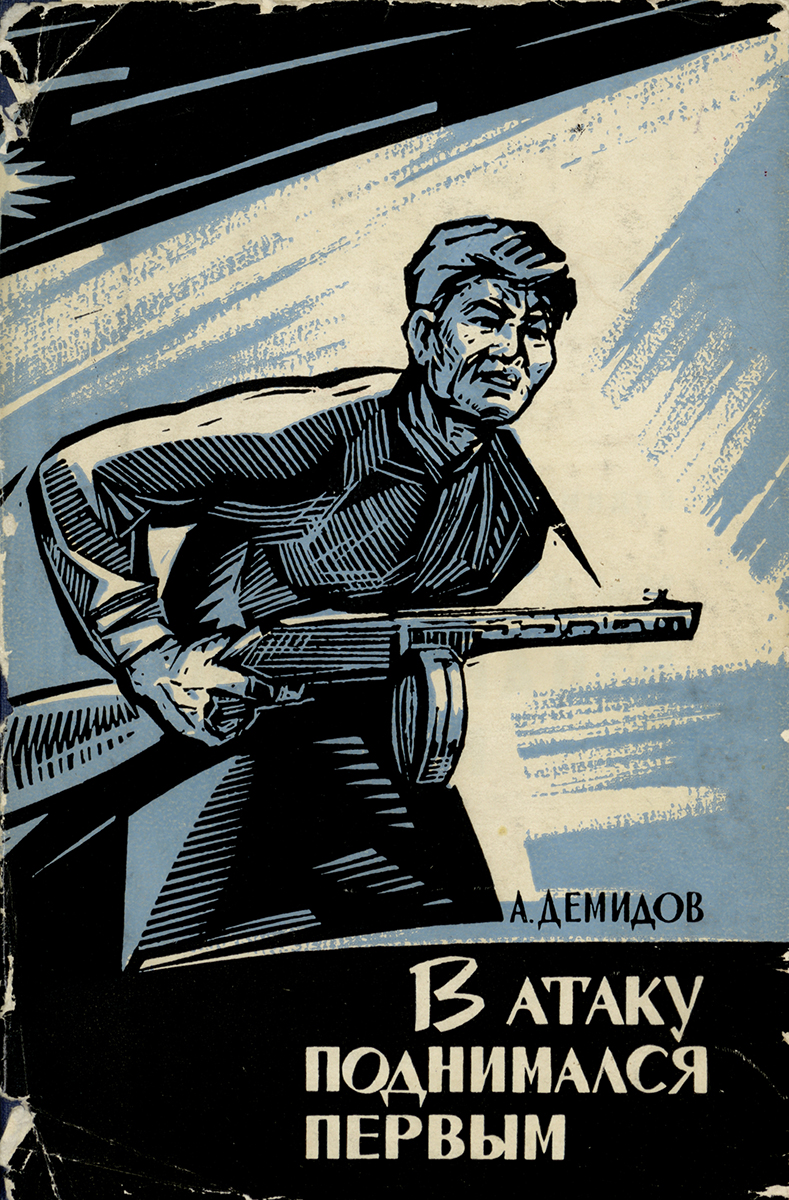 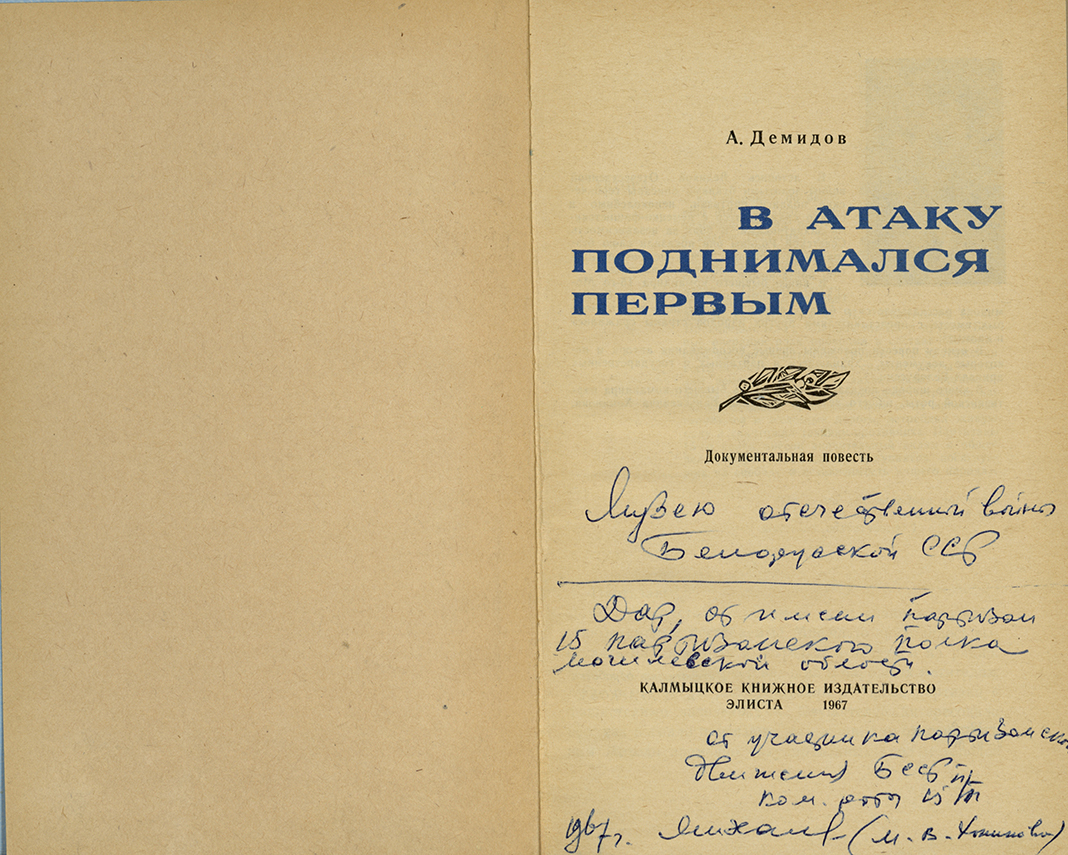