30
To the beginning
Previous page
Records were made wherever and whenever possible – in dugouts, between the battles, on wallpaper, exercise books, office books…

Handwritten partisan journals were kept together with important documents. They contained facts and figures interspersed with stories about the daily grind, battles and heroes. Handmade 'books' were pepped up by pictures and unfailing sense of humor. They were circulated to raise morale. They were read to draw strength.
PAGE
Next page
GIANT OF A MAN.
HERO OF THE SOVIET UNION
VIKTOR LIVENTSEV

A mortar company of the 37th Rifles Regiment of the 56th Rifles Division got into its first firefight not far from the border to the west of Grodno on 22 June 1941. For three days the mortar company defended a nameless hill. The soldiers didn't know they had been cut off. The battalion's commanding officer decided to withdraw the troops to the east. As part of the surrounded group the political commissar Viktor Liventsev fought the enemy near Novogrudok and Stolbtsy.
For reference: Viktor Ilyich Liventsev was a student in the Voronezh pedagogical institute in 1936-1938. He was drafted for the Red Army after the institute. He joined the 20th Cavalry Regiment of the 4th Cavalry Division (the city of Slutsk). He helped liberate Western Belarus in 1939, took part in the USSR-Finland War of 1939-1940, graduated from a political commissar qualification course in Grodno and spent one year studying in a military and political college. In December 1940 he was deployed to join the 37th Rifles Regiment of the 56th Rifles Division to serve as a political commissar in a mortar company. 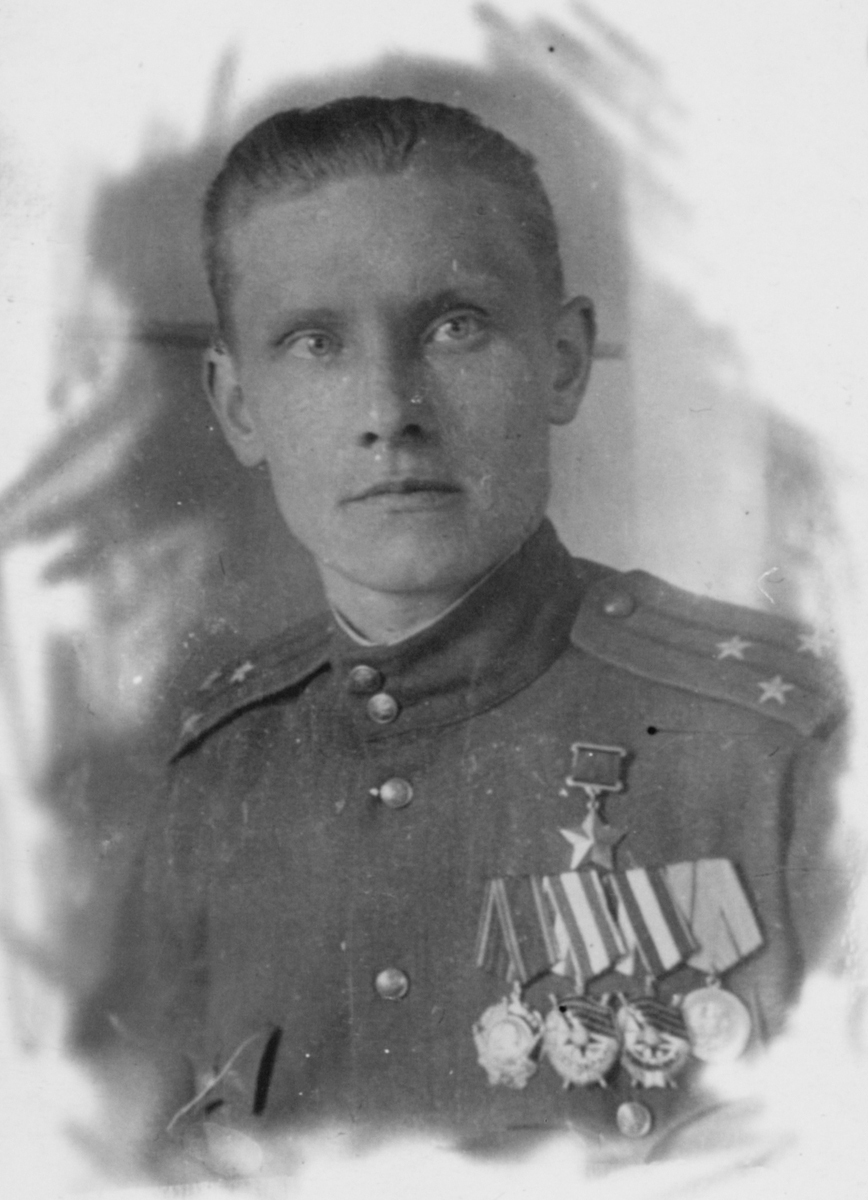 Viktor Liventsev. Hero of the Soviet Union, commanding officer of the 1st Bobruisk partisan brigade in Mogilev Oblast.
Photo from the museum's archives
“
"We, officers, were desperate to catch up with the army. When we understood that the distance was too great, we started thinking about survival and fighting in the enemy's rear. Populated localities were occupied by the Nazi but the enemy didn't settle down yet, there were no administrative offices or police departments established. In other words, we had our chance. So, I ended up in Bobruisk in late July 1941…"
From Viktor Liventsev's recollections 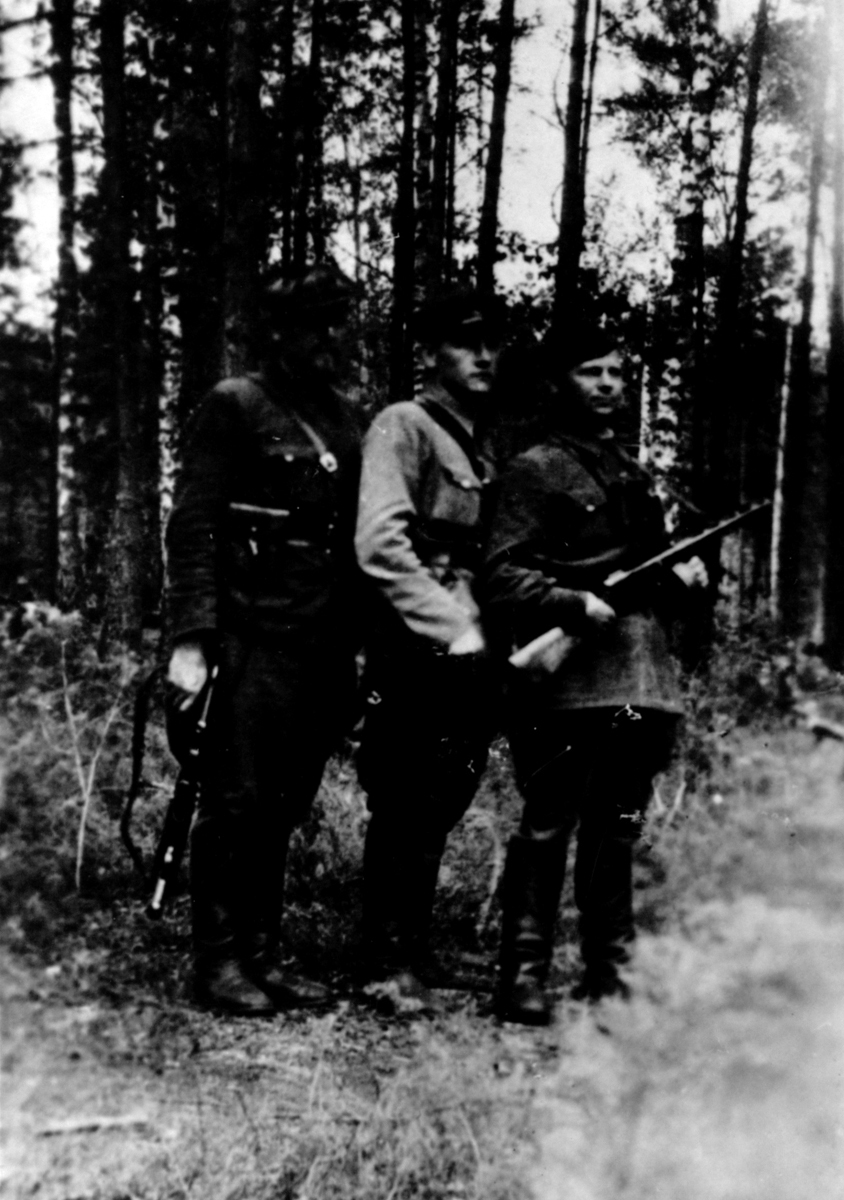 In Bobruisk Viktor Liventsev and two other men, who had been cut off from the army by the invaders, started setting up an underground resistance cell. Initially it acted together with Gubin's partisan unit in Polesie Oblast but in spring 1942 it evolved into the 752nd partisan unit and became part of the Klichev operations center. In early 1943 the unit grew into the 1st Bobruisk partisan brigade, which operated in Bobruisk District and Osipovichi District in Mogilev Oblast and Parichi District in Polesie Oblast. 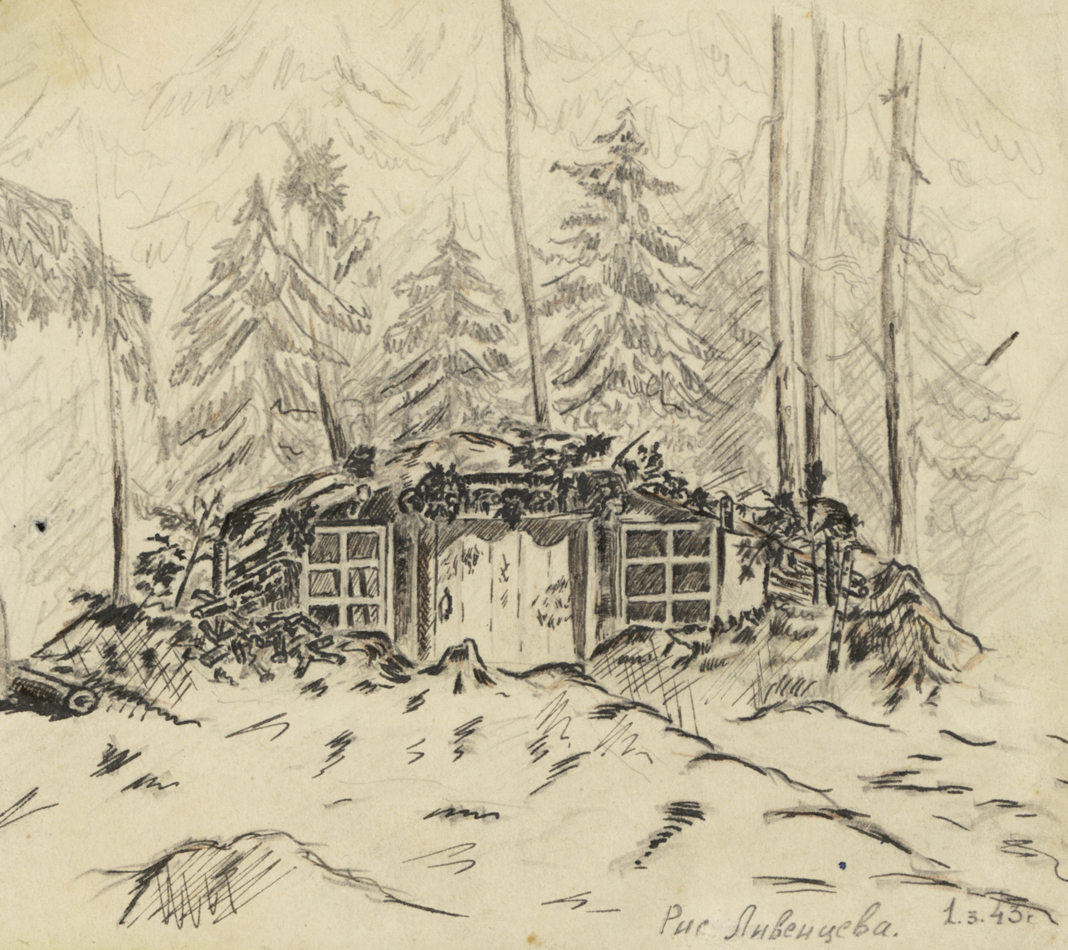 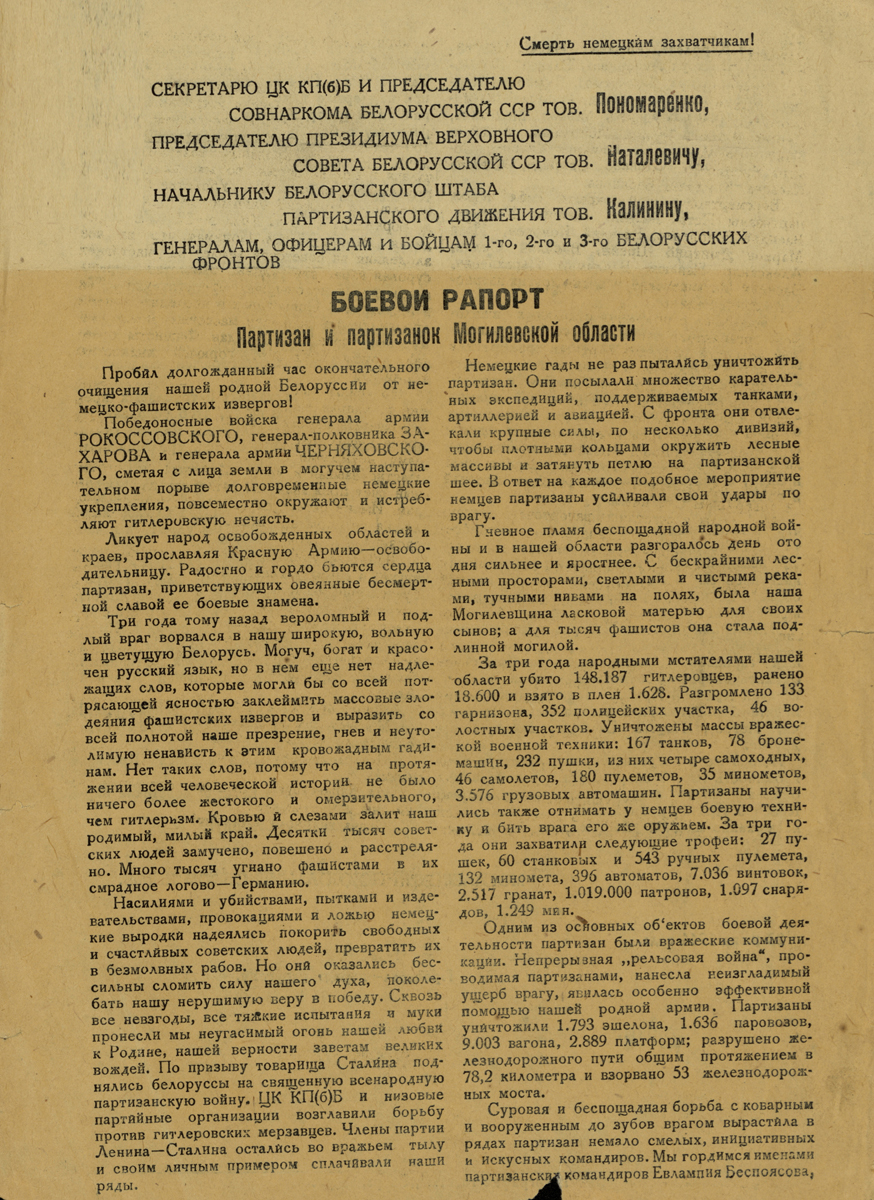 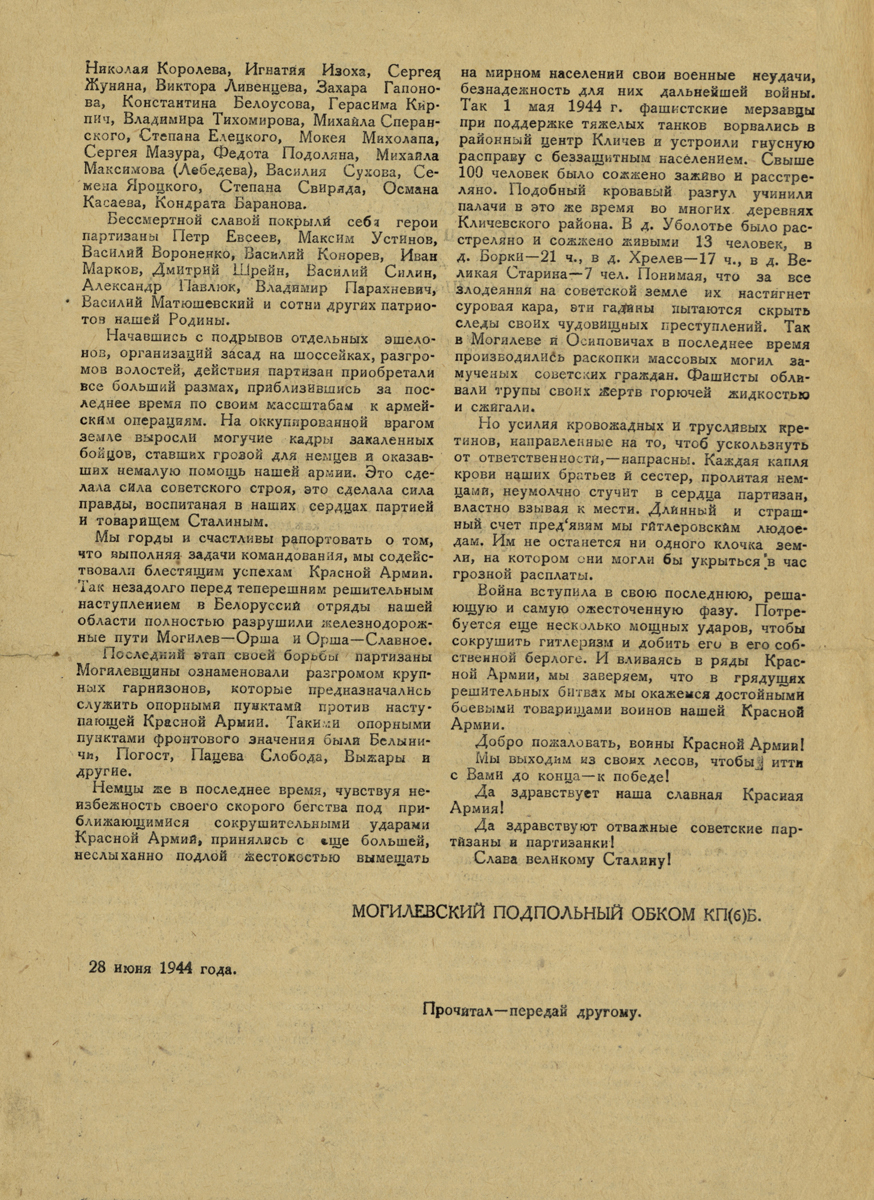 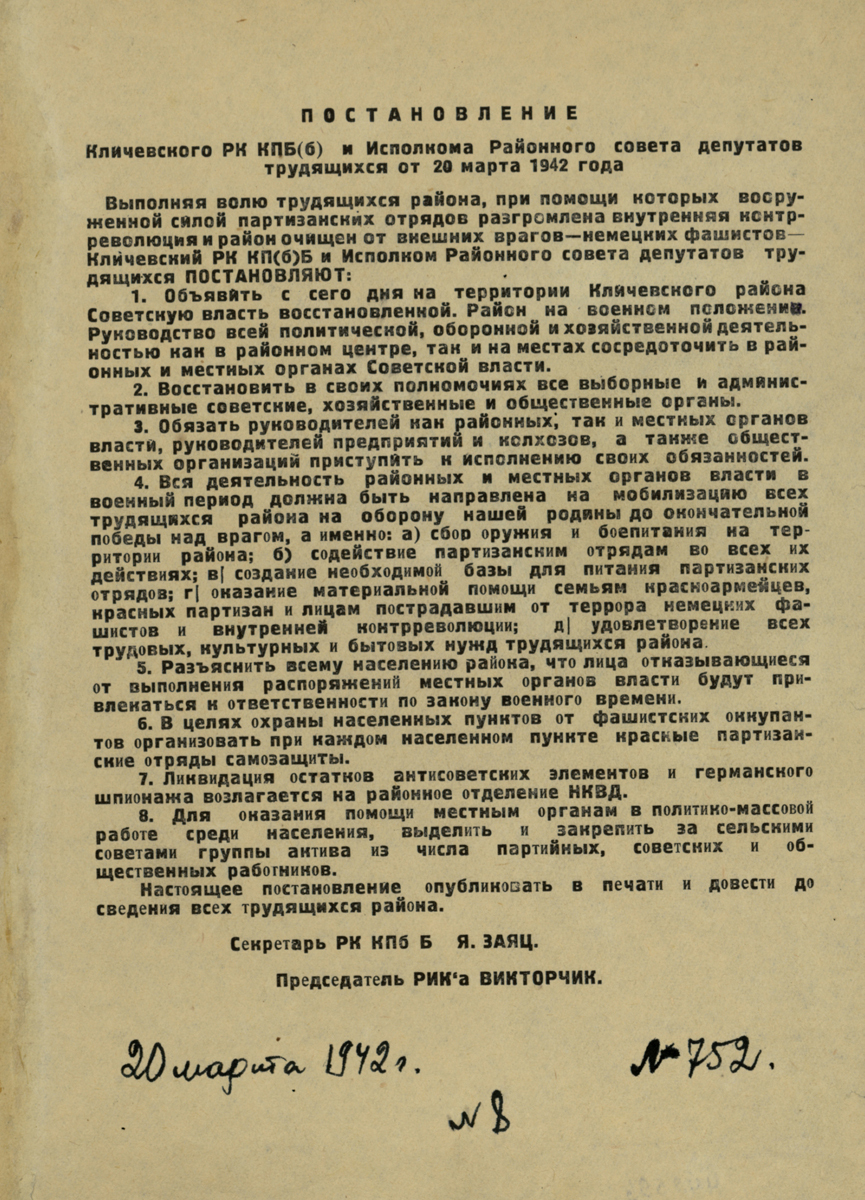 In July 1942, partisans came across printing equipment hidden near the village of Duleba. The 752nd partisan unit got an opportunity to publish a newspaper. The first issue of the Bobruisk Partisan newspaper saw the light on 7 November 1942. Leaflets were also printed. Sergei Kremnyov, chief of staff of the partisan unit, became the newspaper's editor. He was later appointed head of the 1st Bobruisk partisan brigade. All in all, partisans issued 55 leaflets with a total of 25,000 copies and published 35 issues of the newspaper. 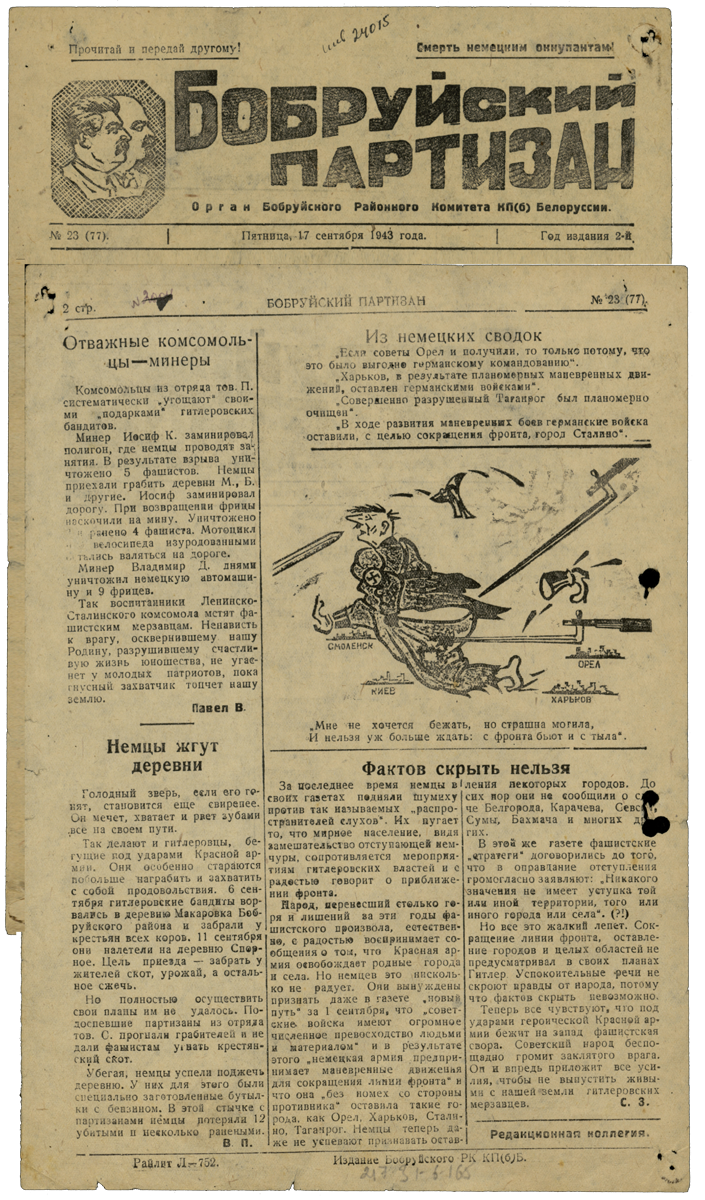 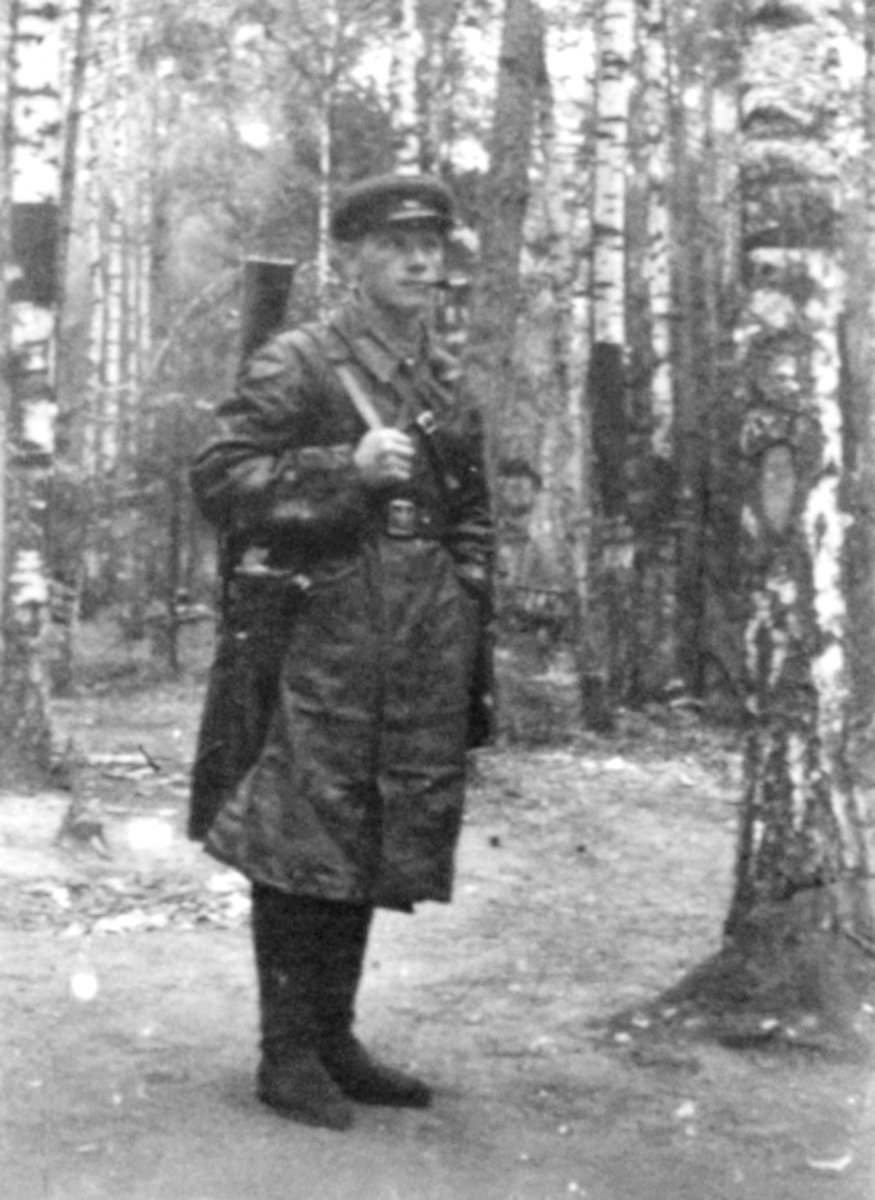 By Decree of the Presidium of the USSR Supreme Council of 1 January 1944, Viktor Liventsev was awarded the title of the Hero of the Soviet Union, the Order of Lenin and the Gold Star medal for courage and heroism demonstrated in the fulfillment of tasks in the enemy's rear and for special merits in the development of the partisan movement. As Viktor Liventsev recalled himself, he received his "hero" title for the rail war. 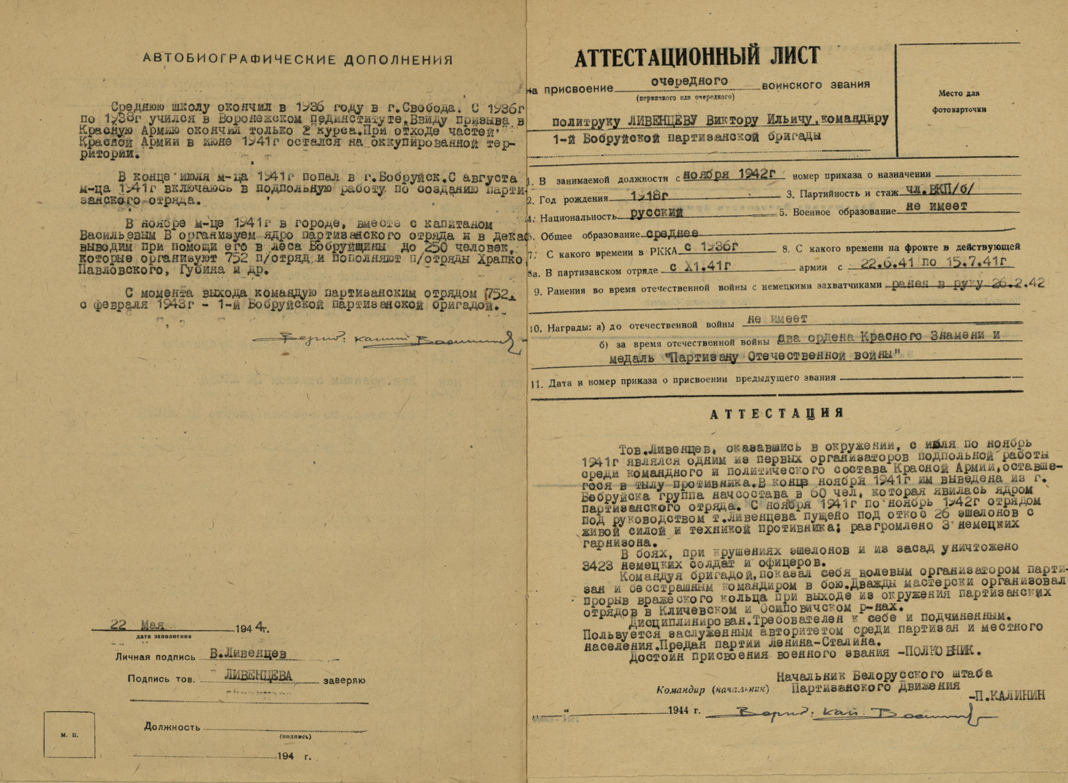 "A fearless commander, a strong-willed organizer. Well-regarded among his partisans and other units ... Liventsev organized a successful breakthrough through the enemy ring twice for the partisan units in Klichev District and Osipovichi District." 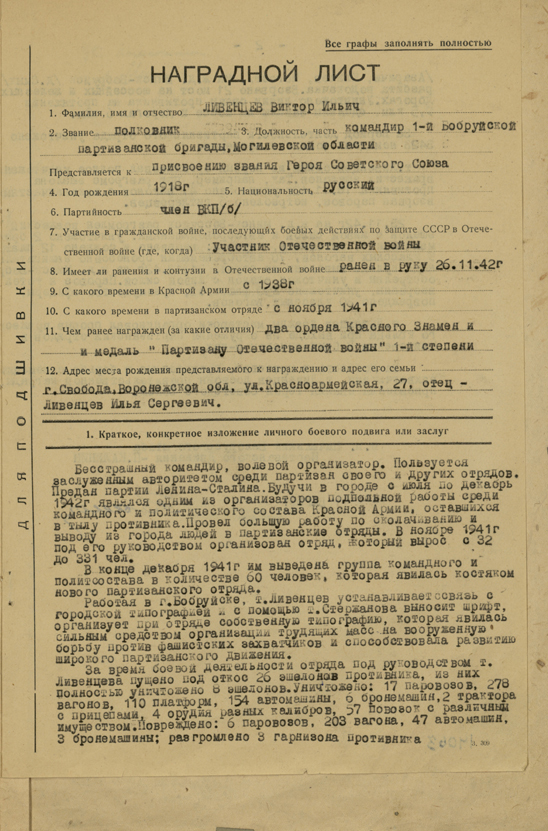 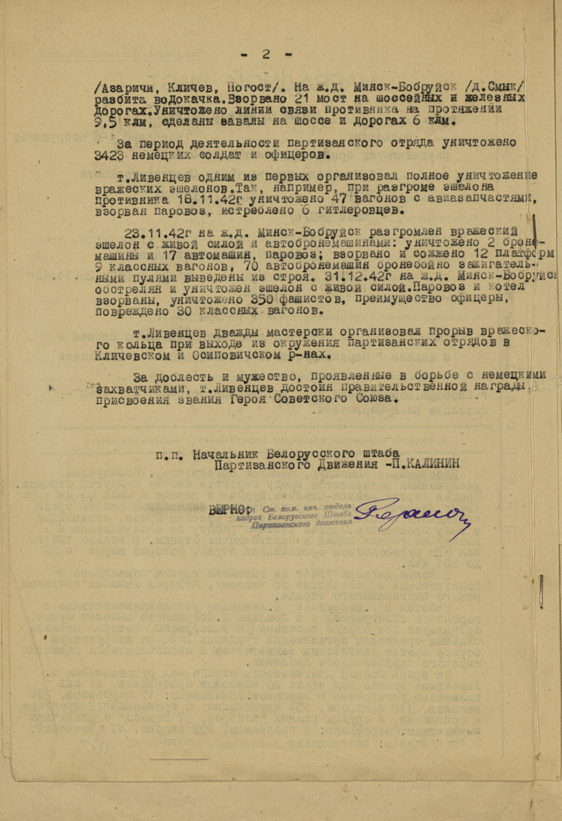 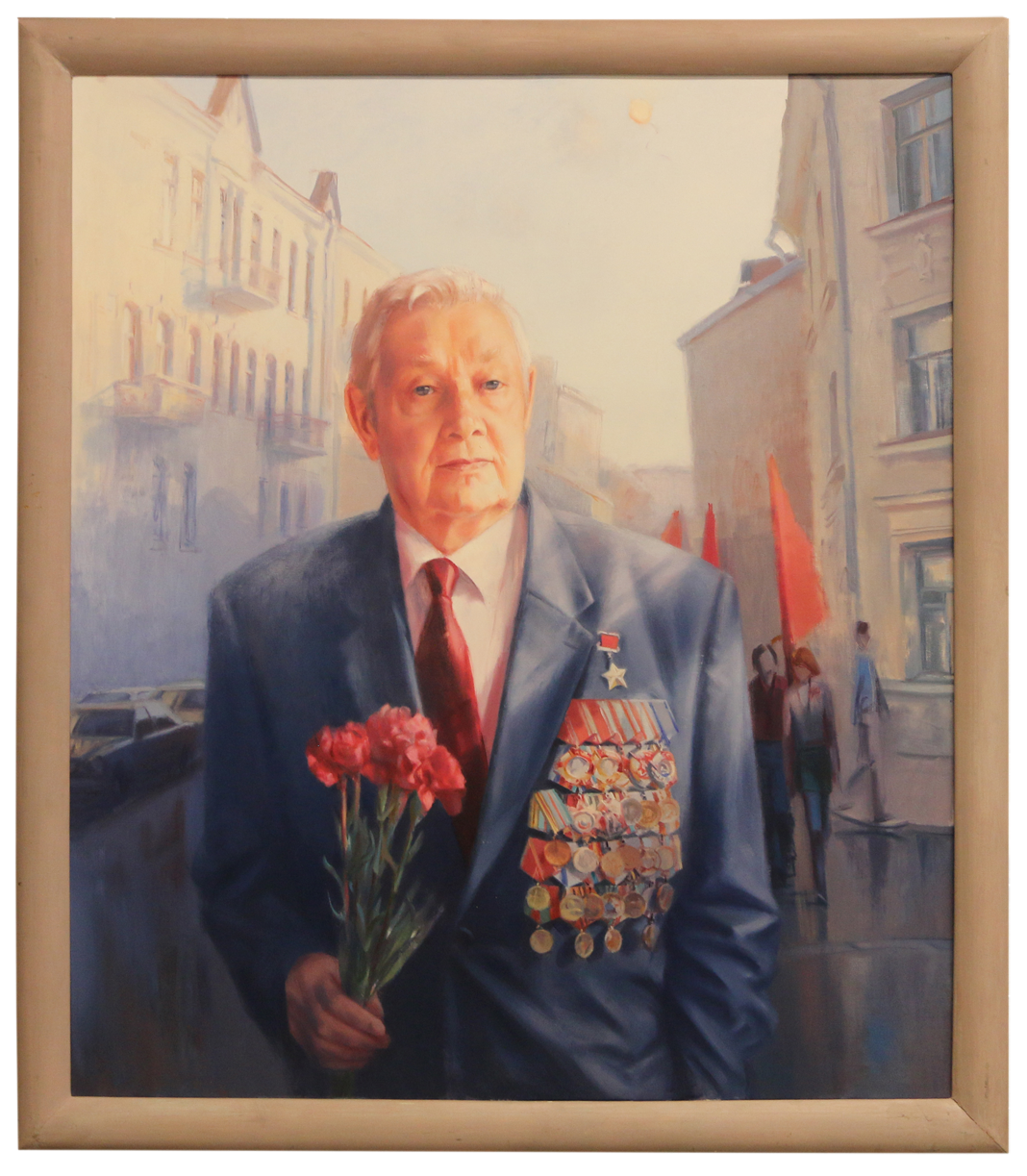 The battle roads for Hero of the Soviet Union Viktor Liventsev ended in the liberated Minsk. Until 1950 he worked as department head, secretary of the Central Committee of the Leninist Communist Youth Union of Belarus. He graduated from the National Party School and the Minsk Teachers Institute. Viktor Liventsev dedicated the most significant part of his life, 20 years, to physical education and sports. In 1958, Liventsev was put in charge of the Committee on Physical Education and Sports at the BSSR Council of Ministers.
Viktor Liventsev's portrait. Made by N.V.Liventseva, 2009
Viktor Liventsev's years of work as head of the Belarusian sport are called the Liventsev era. During these years Belarusian athletes graced the podium at the World and European championships as part the USSR national teams on numerous occasions. These years saw the stars of the Belarusian sport, including Olympic champions Alexander Medved, Romuald Klim, Sergei Makarenko, Leonid Geishtor, Oleg Karavayev, Yelena Belova, Viktor Sidyak, and Olga Korbut. One of the streets in Bobruisk is named after Viktor Liventsev.
Handwritten journal Soviet Patriot, issue No.9, May 1943
Handwritten journal Soviet Patriot, issue No.12, November 1943