9
To the beginning
Previous page
Records were made wherever and whenever possible – in dugouts, between the battles, on wallpaper, exercise books, office books…

Handwritten partisan journals were kept together with important documents. They contained facts and figures interspersed with stories about the daily grind, battles and heroes. Handmade 'books' were pepped up by pictures and unfailing sense of humor. They were circulated to raise morale. They were read to draw strength.
PAGE
Next page
In 1941 a military unit, where Evgeny Filipskikh served as an instructor, was encircled. He put together a small team of Red Army soldiers who made several unsuccessful attempts to break through the front line. Back then nobody could imagine that five fearless Bolsheviks, five dedicated warriors of the Soviet Motherland would make the core of the partisan brigade that would become a powerful combat unit…
LEGENDARY COMMANDER FILIPSKIKH
AND HIS MEN 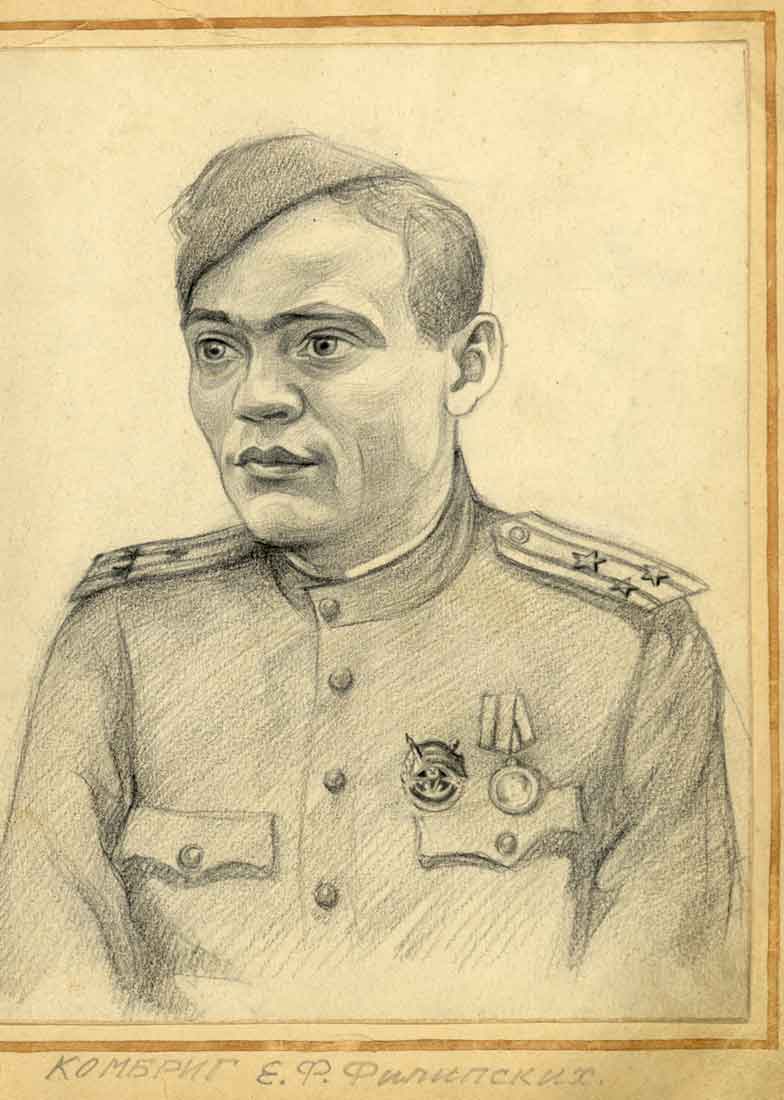 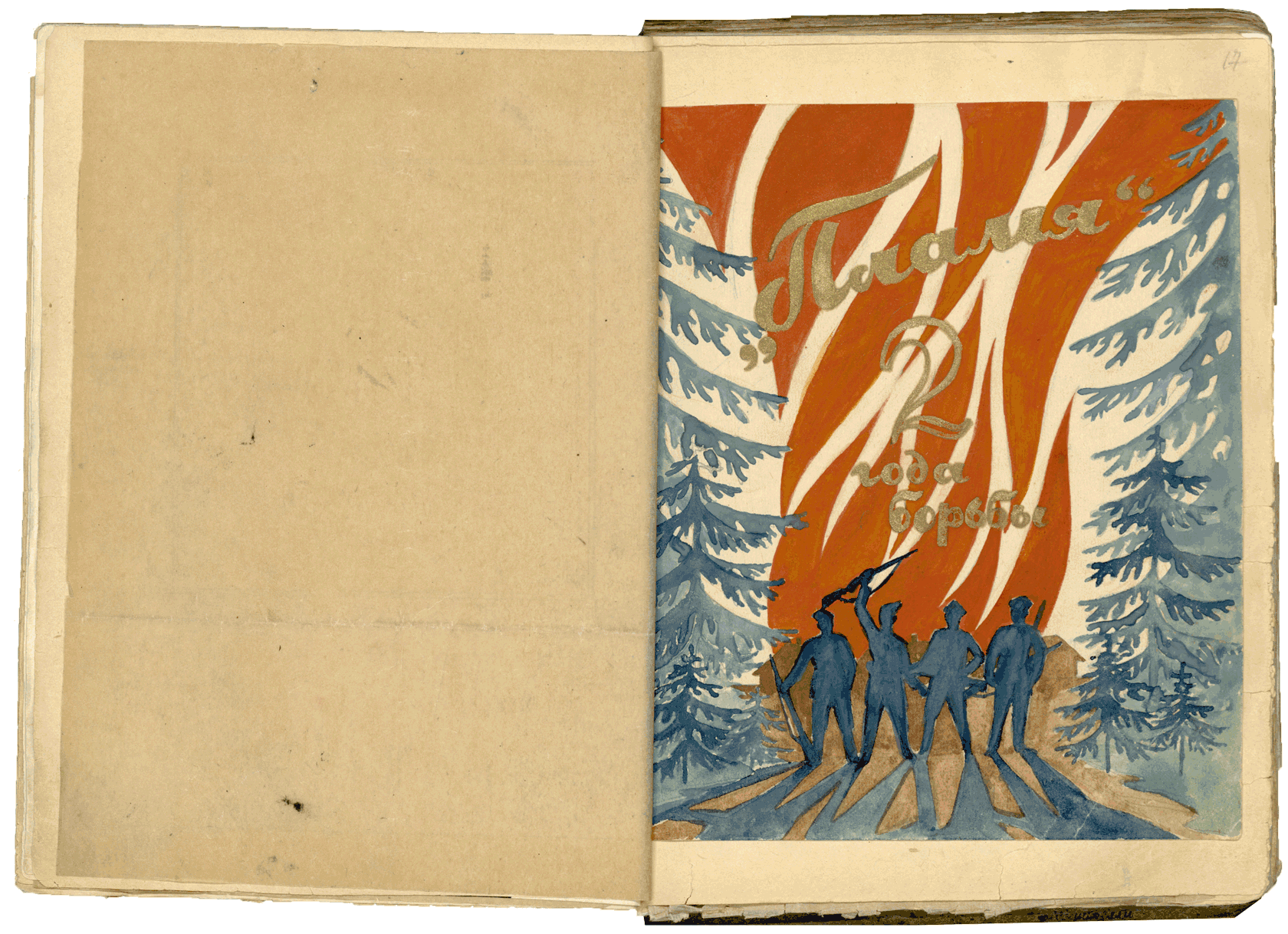 In November 1943 the Chief of the Central Staff of the Partisan Movement Lieutenant General Panteleimon Ponomarenko came across the journal "Two Years of Struggle" dedicated to the second anniversary of the partisan brigade Plamya (Flame). Its fighters fought against the enemy in Pukhovichi District, Minsk Oblast.

This handwritten journal narrated about the life, combat operations and art of national avengers. A new series of the Partisan Chronicles is dedicated to the brigade and its legendary commander – Hero of the Soviet Union Evgeny Filipskikh.
Despite initial setbacks of the Red Army, the fighters did not get confused: the first official document, Protocol No. 1, reflected a real understanding of the situation on the front and clearly articulated goals and objectives.
Members of the group were ready to live and fight against the enemy amidst the toughest conditions of the war time that were the same for all: "If anyone of us betrays the compact, he will be executed as a traitor..." (Paragraph 3, Protocol No. 1). 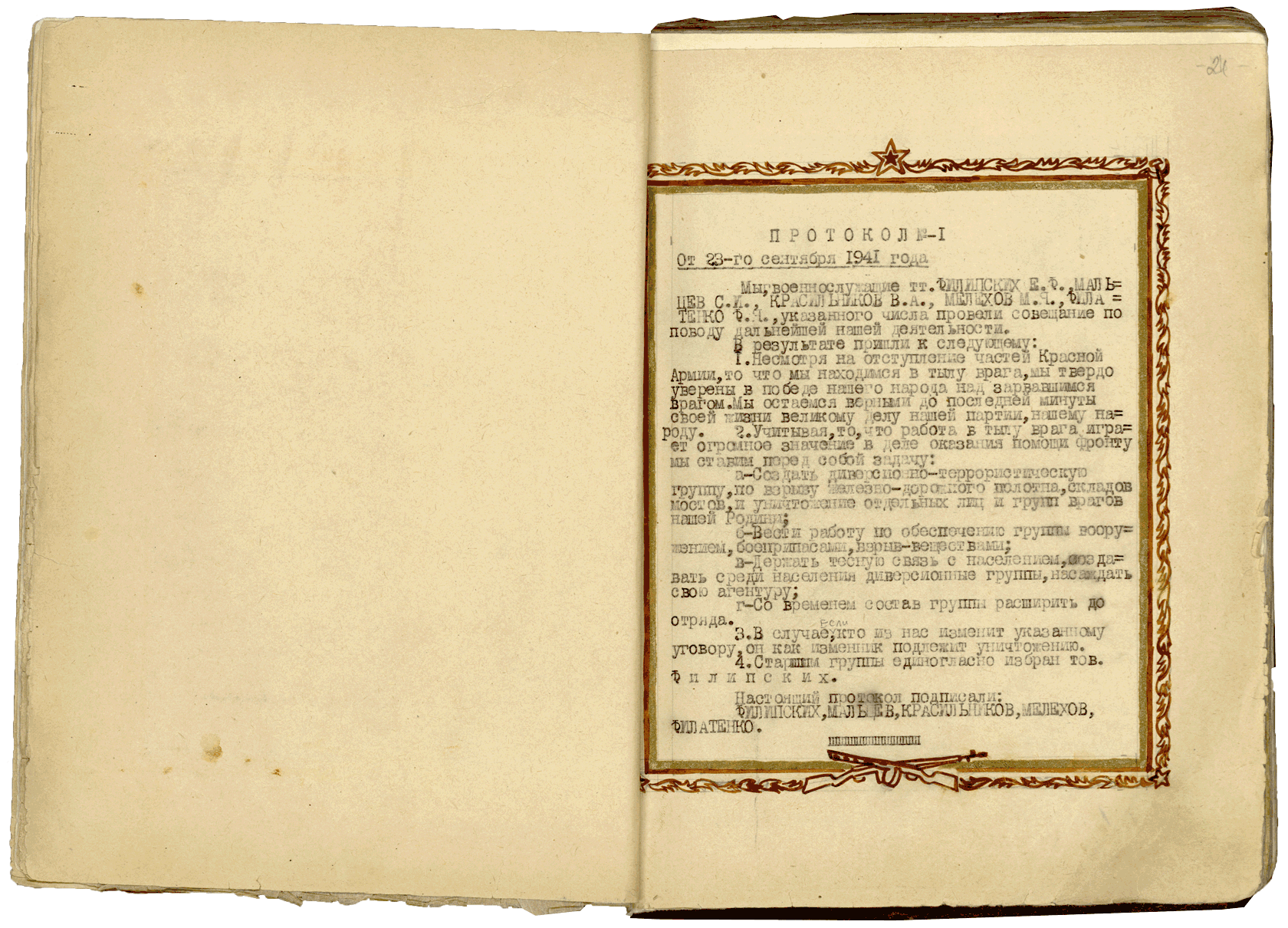 Photo from the museum's archives
"...It was during this time in the autumn of 1941, in late September, that a handful of brave patriots set up the core of the future partisan brigade Plamya (Flame) in one of the districts of the temporarily occupied Soviet Belarus, in remote corners of Pukhovichi forests. They did it by taking an official oath and making an official record of this. From a little spark burst a flame/It was a little spark that burst into a flame. Despite attacks of the enemy, hunger and cold, neglecting the dangers of the enemy rear, living in the forest thickets, five Stalin's fearless Bolsheviks, five warriors of the Soviet Motherland: Evgeny Filipskikh, S. I. Maltsev, V. A. Krasilnikov, M.Y. Melekhov (killed in action), F.Y. Filatenko and N.F. Kolnogorov "firmly believed in the victory of our people over the enemy". Cut off from the Red Army, isolated from the Soviet Motherland, the brave patriots kept their spirits high. To maintain faith in the victory of their people, they signed a compact: in case anyone of them betrays it, he will be executed as a traitor of the Motherland." 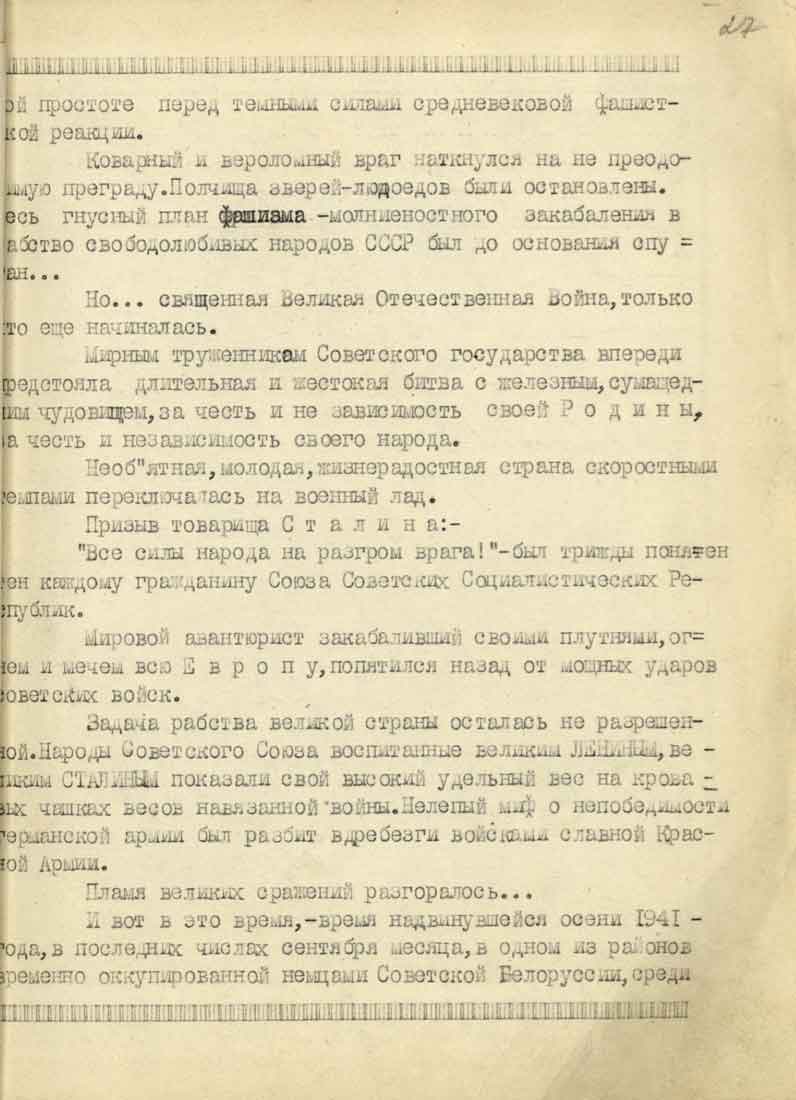 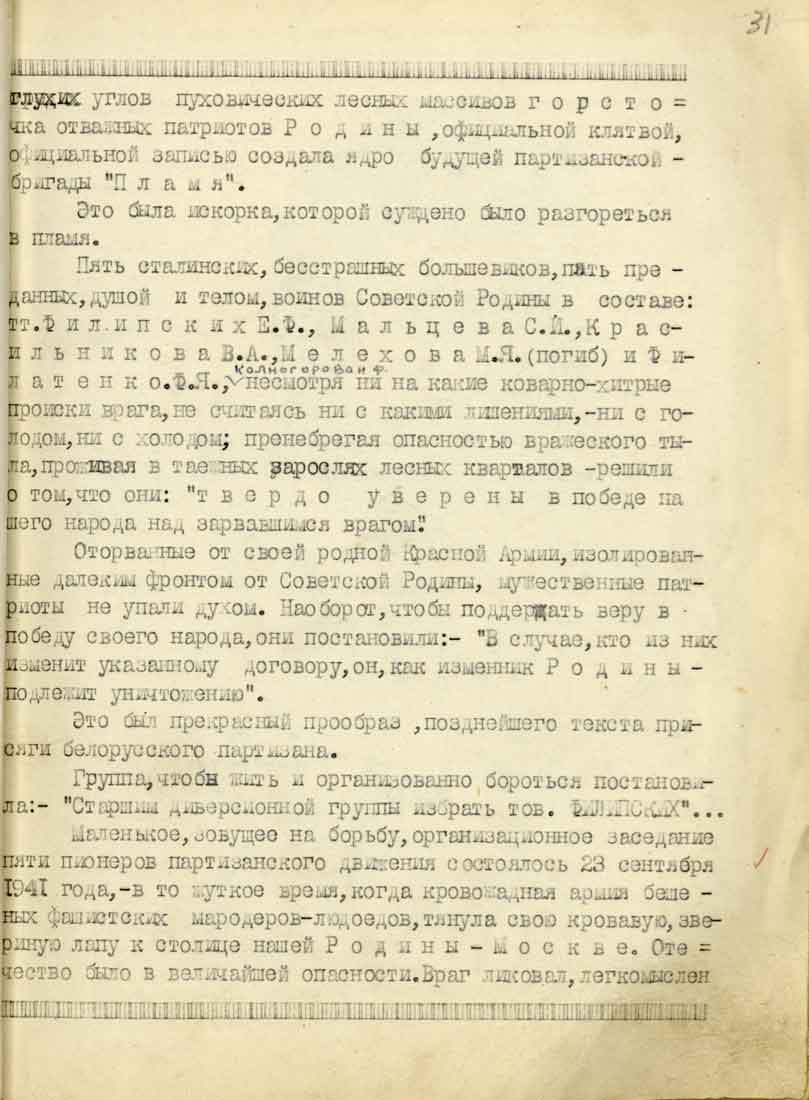 In the future the text of the compact was used to draft an oath of allegiance of Belarusian partisans:
"I, citizen of the Union of Soviet Socialist Republics, a faithful son of the heroic Belarusian nation, swear not to spare my efforts or even life to liberate my people from the fascist butchers and invaders and not to lay down weapons till my native Belarusian land is freed from the fascist filth.

I swear to fulfill the orders of my commanders and superiors, strictly and without failure, to maintain strict military discipline and keep military secrets.

I swear to be merciless while taking revenge on the enemy for burnt towns and villages, for the death of our wives, children, fathers and mothers, for violence and humiliation of my people. I swear to destroy the German invaders anytime and anywhere, relentlessly, bravely, decisively, aggressively and ruthlessly.

I swear to help the Red Army with all ways and means to destroy the German tormentors and thus contribute to the fast and final defeat of the murderous fascism.

I swear that I would rather die in a fierce fight against the enemy than surrender to the blood-soaked fascism and allow the enemy to enslave myself, my family and Belarusian people.

The words of my sacred oath proclaimed in front of my partisan comrades will be affirmed by my signature. I will stick to this oath forever. I will never budge on it.

If I break this oath because of my weakness/cowardice or evil intent and betray the interests of people, I should die a shameful death at the hands of my comrades."

Time was passing by: "More and more patriots of the Soviet Motherland joined the combat group of Comrade Filipskikh. They brought weapons and munitions. Having no links to the Red Army, guided only by their patriotic feelings, they engaged in action. The ranks of national avengers grew bigger, so were their accomplishments…" 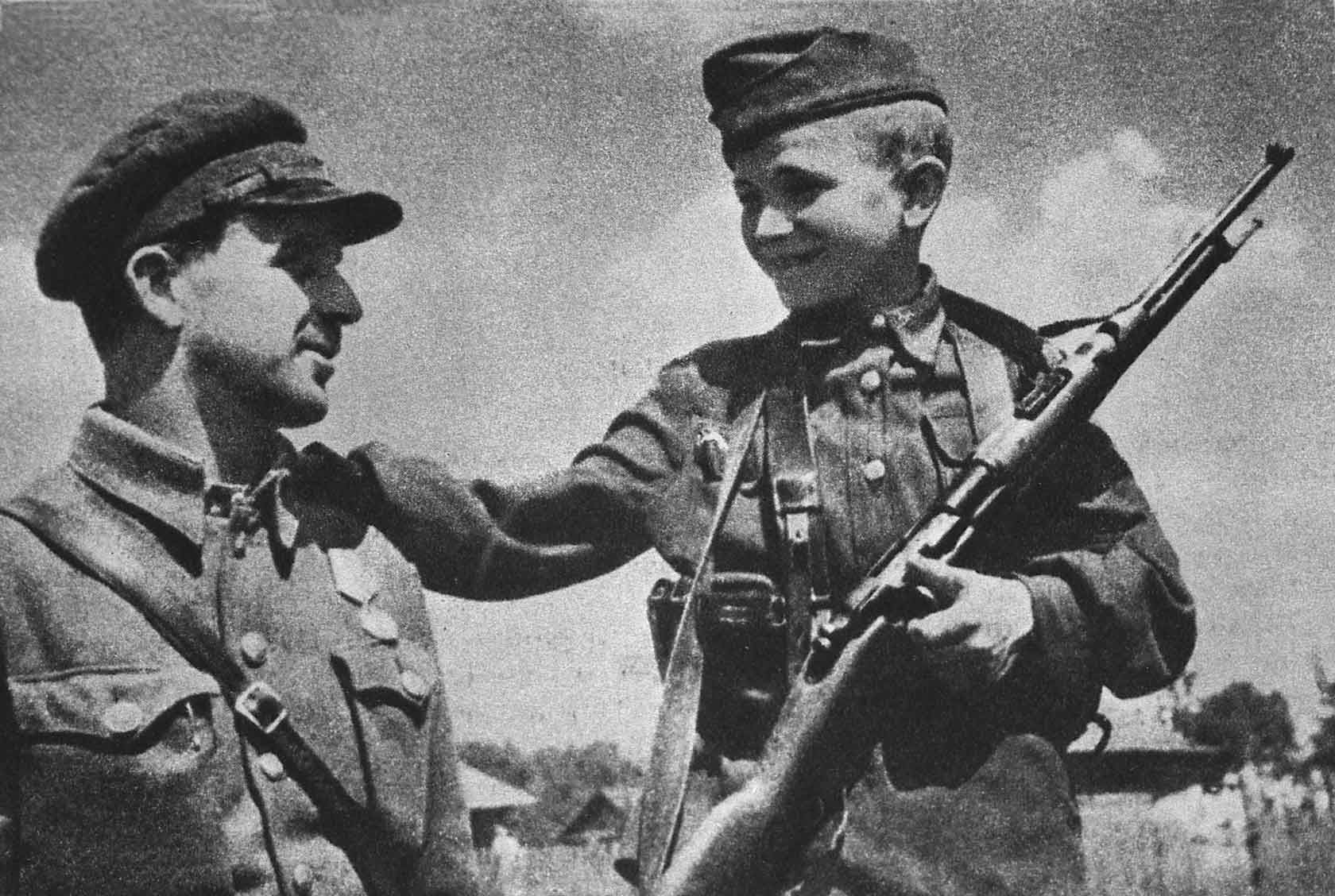 Partisans: a father and a son, 1944. Photo by BelTA
Partisans taking an oath, 1943. Photo by BelTA
People's support became increasingly important for Belarusian partisans:
"People who groaned under the yoke of the invaders were cheered up and started helping hero partisans even more vigorously. People helped in every way they could: they brought weapons, munitions, food and clothing; they did reconnaissance work and served as guides; more and more great people joined the partisan ranks. That was the beginning of the right political communication between partisans and civilians." 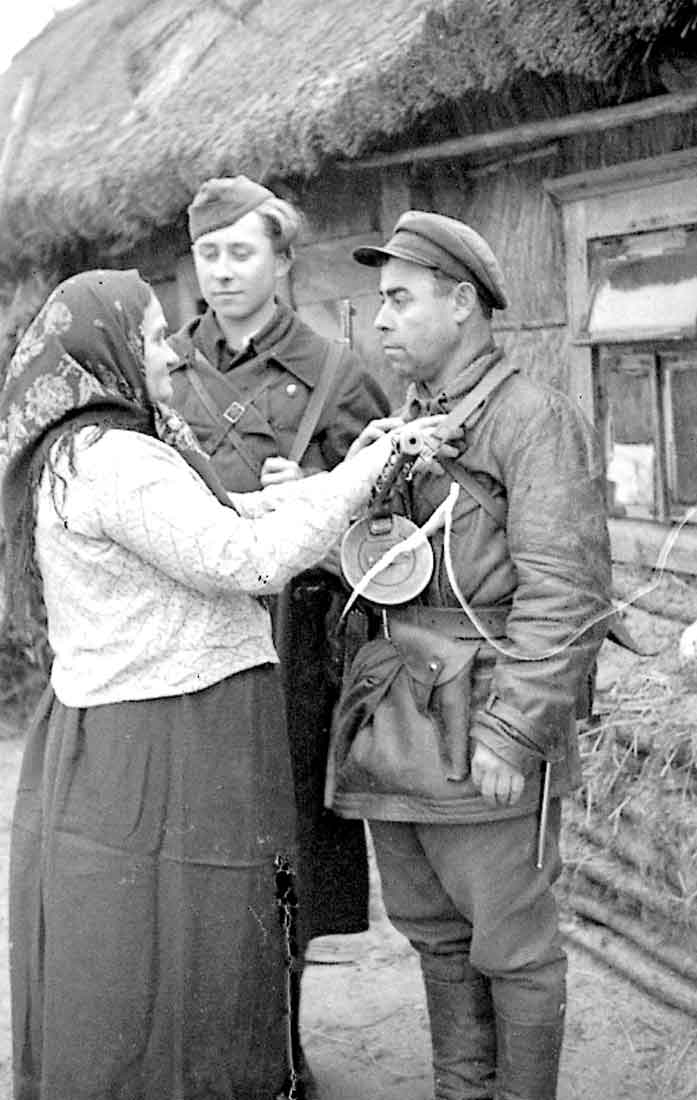 A mother bidding farewell to her son as he leaves to join the partisans, 1943. Photo by BelTA
Everyone was overwhelmed with joy when a welcoming government telegram came from Moscow saying that Commander of the Plamya unit Filipskikh, commissar Shklyarik and several partisans would receive high military awards for their successful combat operations. The partisans realized that people in the capital city knew about them and valued them: 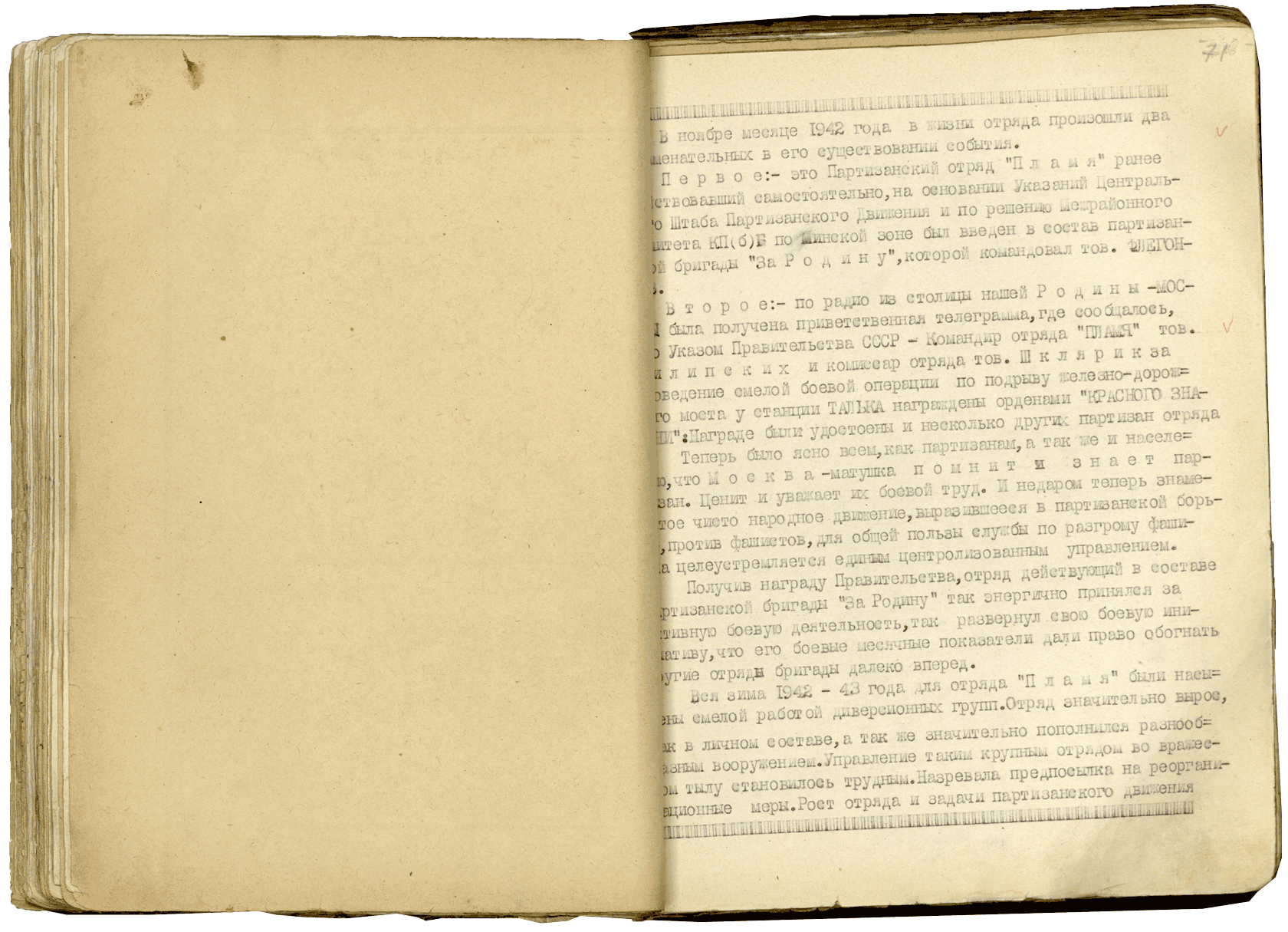 "…It was now clear to everyone, partisans and local residents that mother Moscow remembers and knows partisans. That Moscow appreciates and respects their combat work. It is for a reason that a purely grassroots movement evolving into the partisan war came under the umbrella of the central command. After getting the award from the government, the partisan unit acting as part of the partisan brigade Za Rodinu (For Motherland) put so much effort into combat operations and initiatives that its monthly combat figures went way ahead of the figures reported by other units of the brigade…"
Thus a small subversive force became an independent partisan brigade:
"At that time the partisan unit boasted the brigade's best combat record and a closely-knit team of communists and Komsomol members. On 26 June 1943 the Plamya partisan unit was converted into an independent partisan brigade Plamya upon orders of the Minsk zone inter-district underground committee of the Communist Party of Belarus in line with general guidelines of Comrade Stalin and the Central Staff of the Partisan Movement. The brigade consisted of several partisan units: Plamya, Slava, Pobeda, and the unit named Chapayev… The miniscule subversive force evolved into the partisan brigade Plamya, which deeds had been duly recognized by the Motherland…" 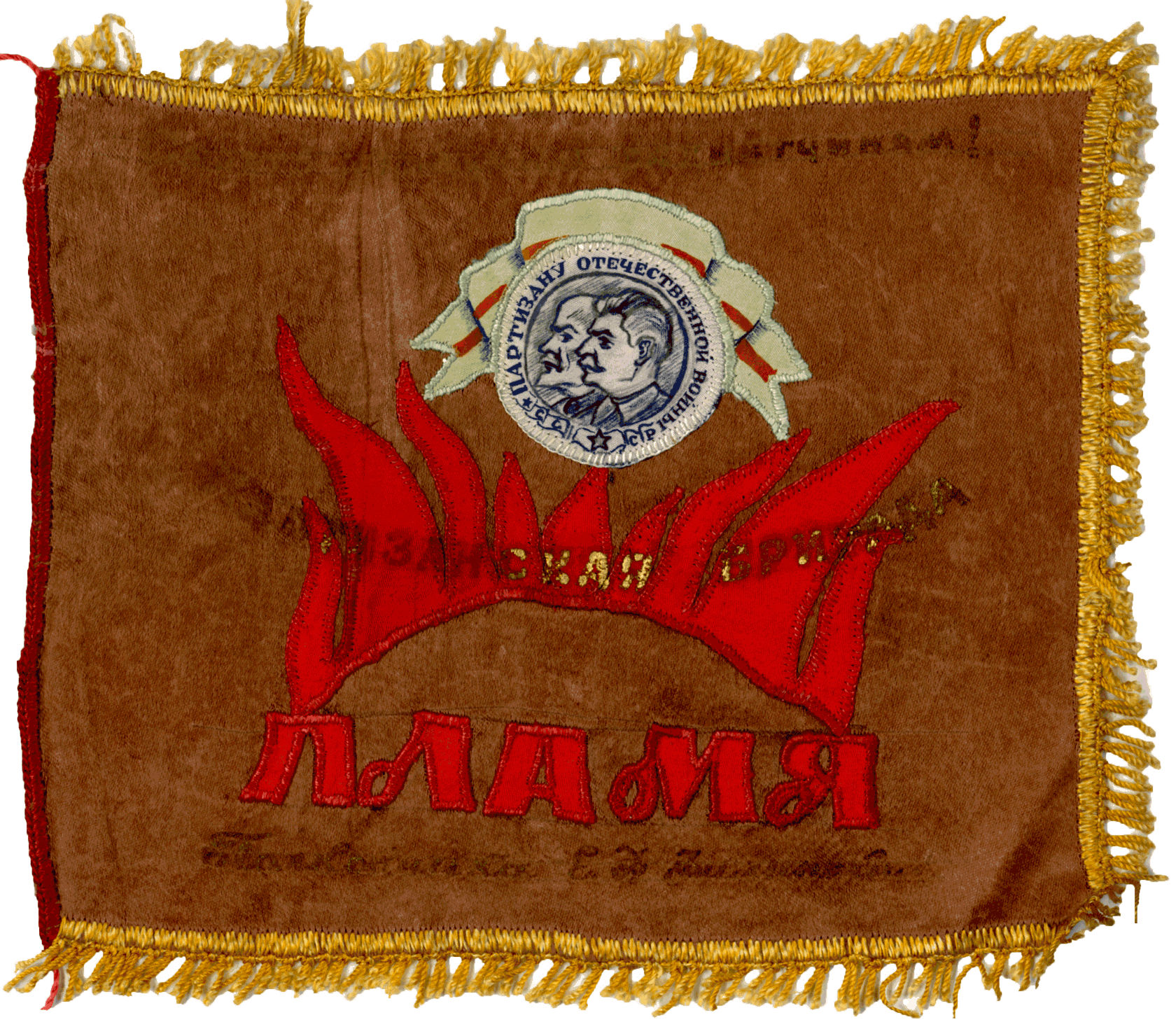 A flag
Units of the brigade embarked on preparations to celebrate the second anniversary since the core of the brigade was established by blowing up and derailing enemy trains. Each partisan unit set out to derail three enemy trains within 15 days before the Day of the Brigade. The results were impressive:
1. Combat leaflets issued – 15,
2. Journals issued – 1,
3. Reports to unit personnel made – 6,
4. Rallies in partisan units held – 20,
5. Individual meetings held – 48,
6. Sovinformburo bulletins – every day,
8. Rallies in villages held – 52,
9. Reports to villages and garrisons sent – 5,400,
10. Addresses to population sent – 210,
11. Messages to populists and police sent – 840,
12. Copies of the Partisan of Belarus newspaper distributed – 1,520,
13. Leaflets in foreign languages distributed – 31,
14. Copies of national newspapers distributed – 210. 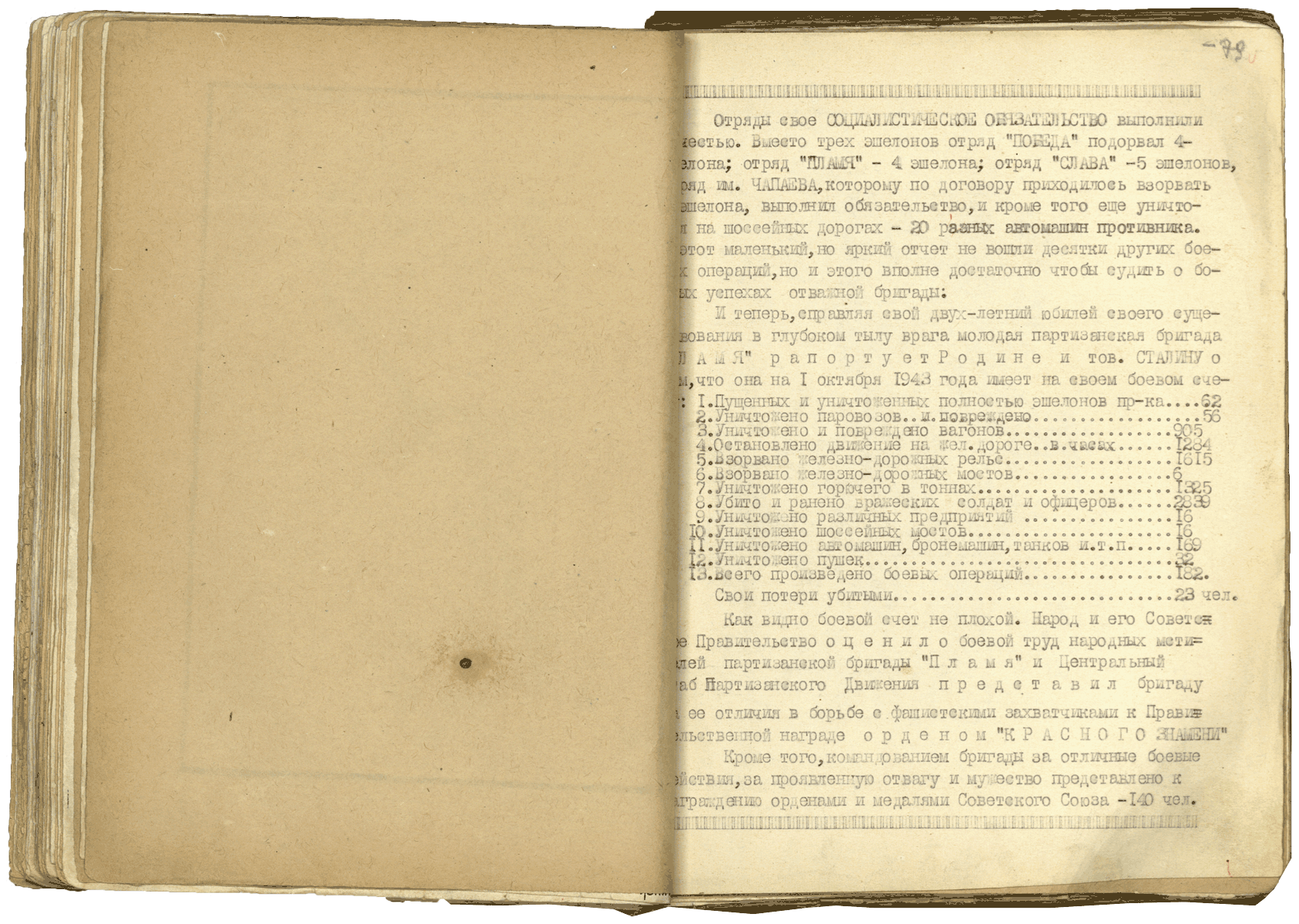 A lot of effort went into informing the brigade personnel and the local population about the state of affairs on the frontline and on the home front. The report covering September 1943 is a case in point:
Combat achievements of the national avengers are self-explanatory: 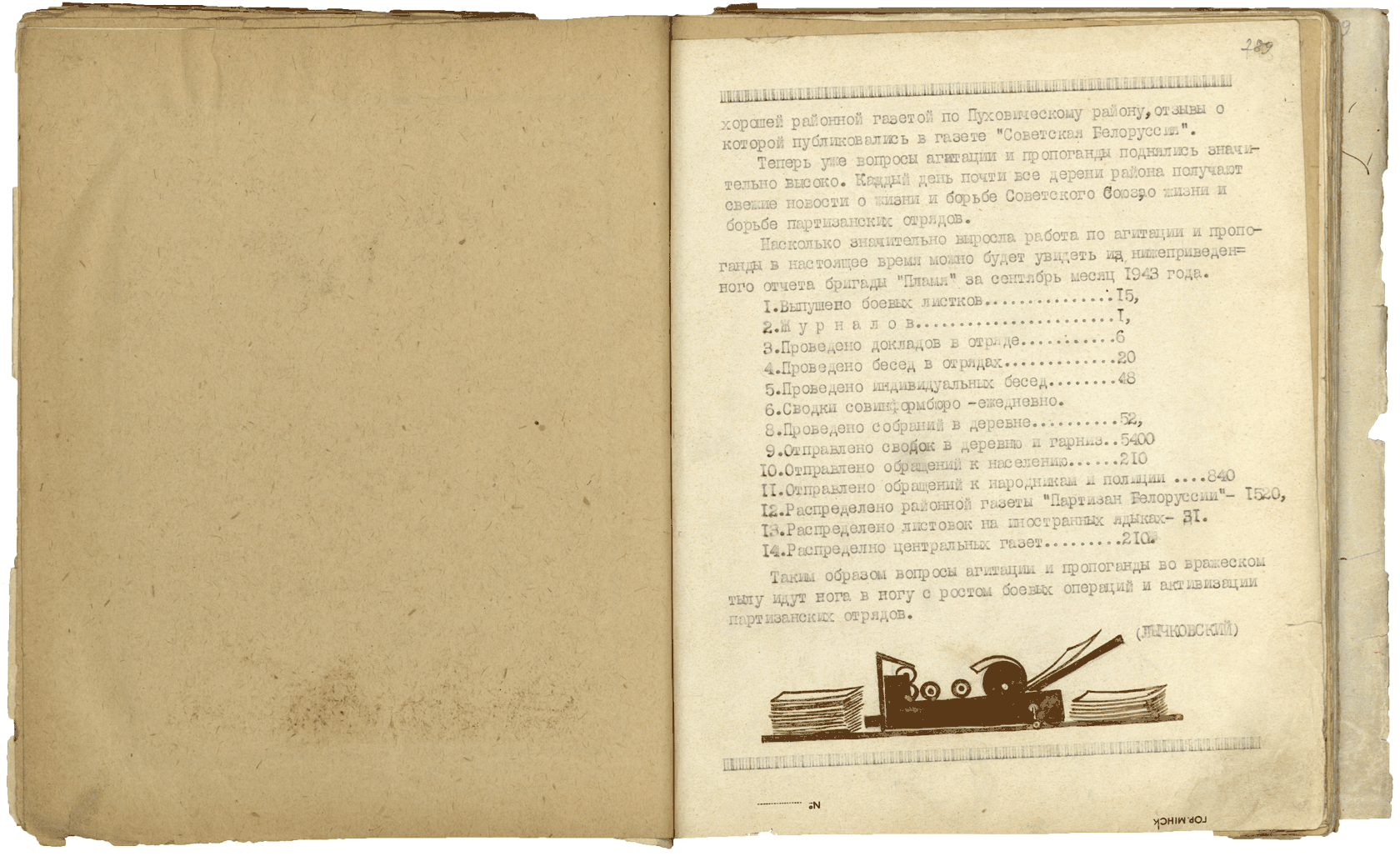 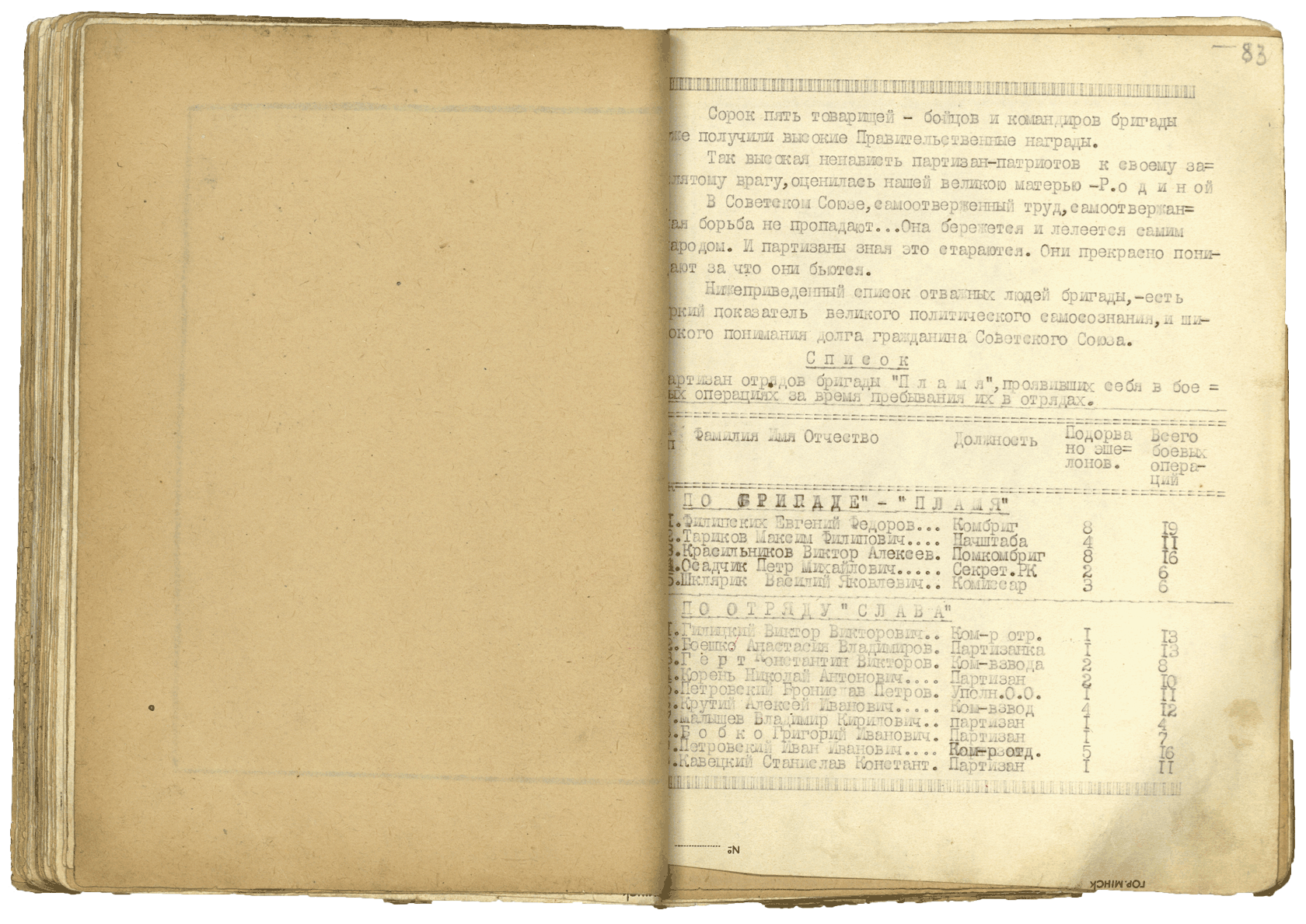 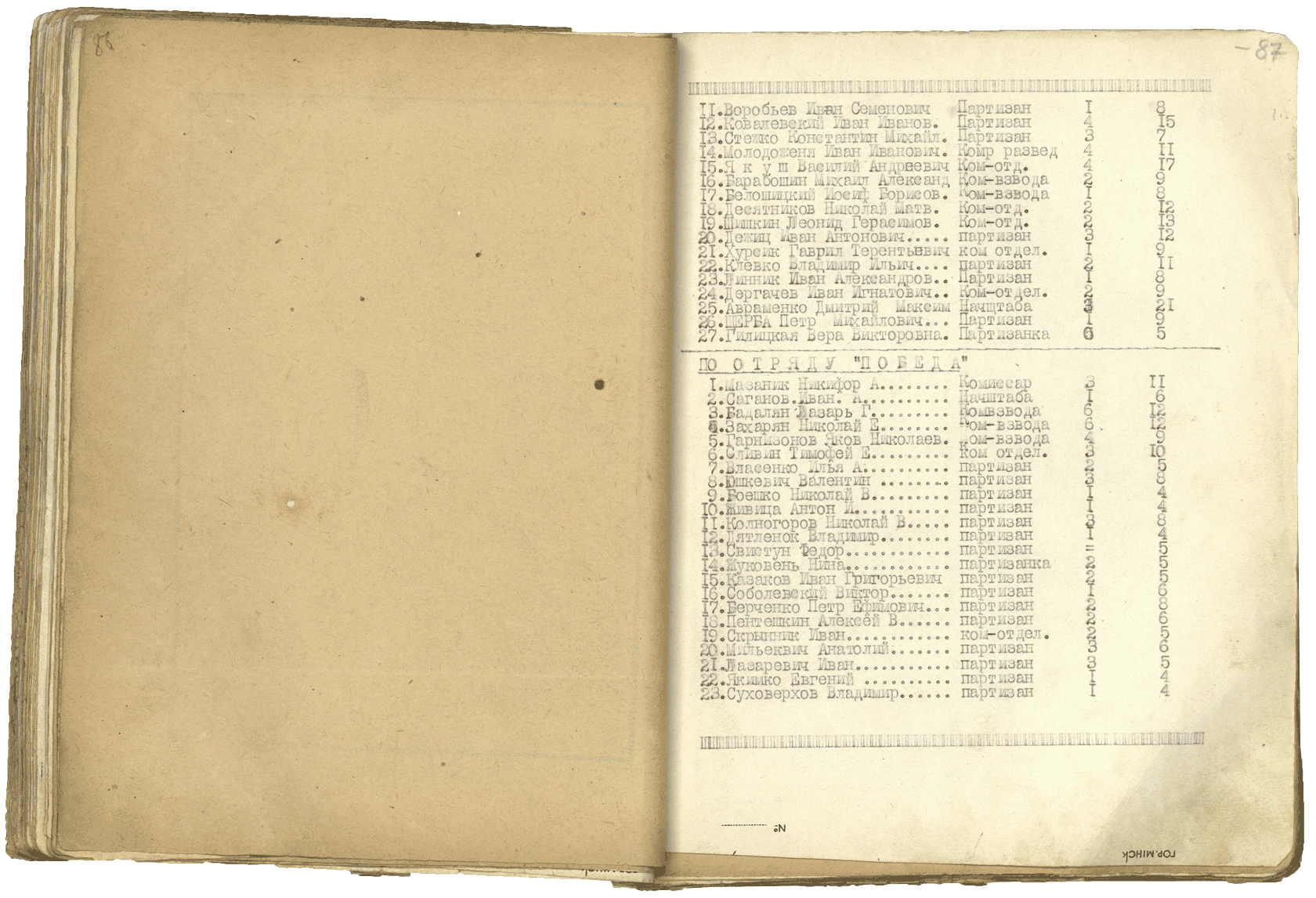 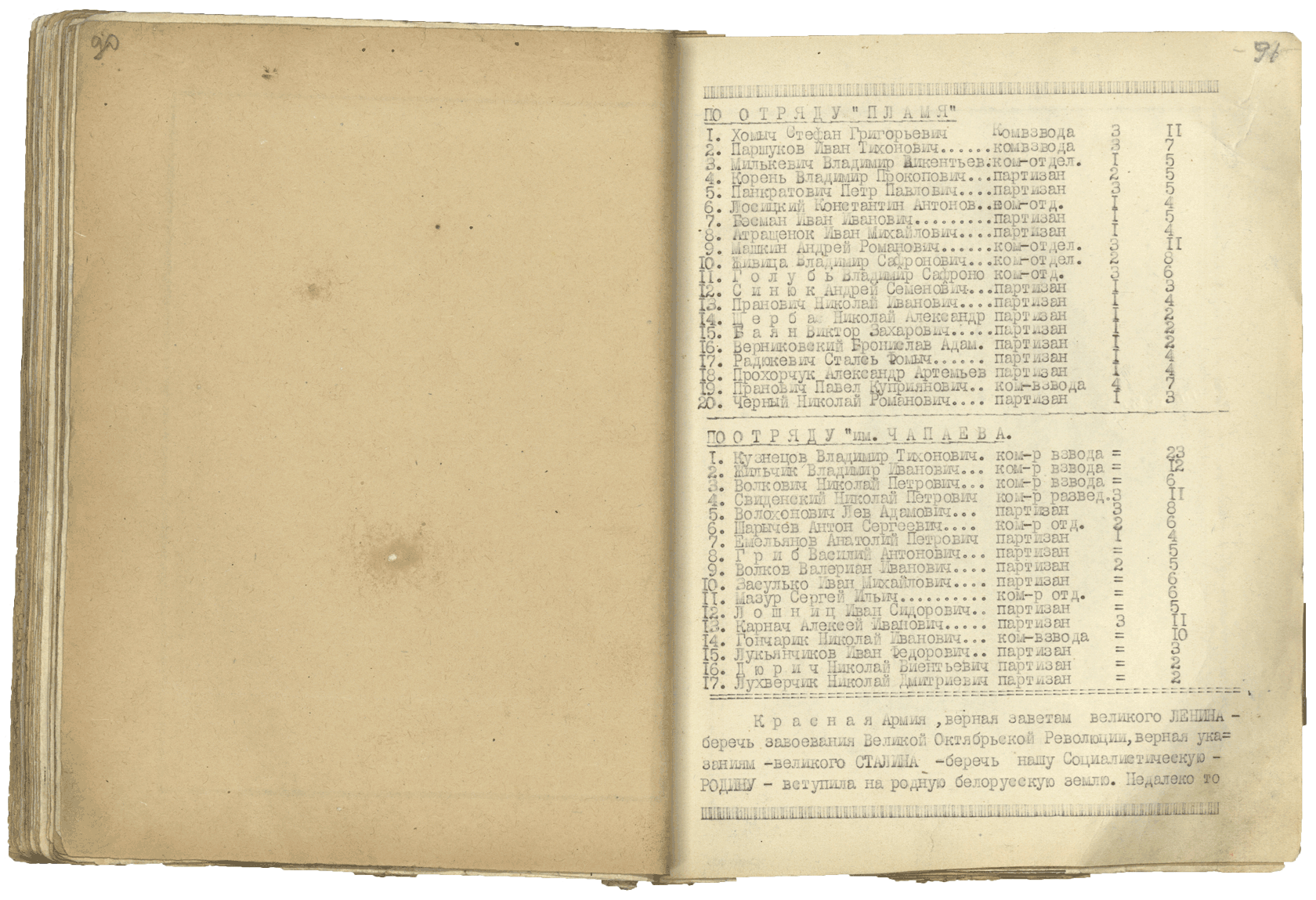 Names of the fallen will always be remembered: 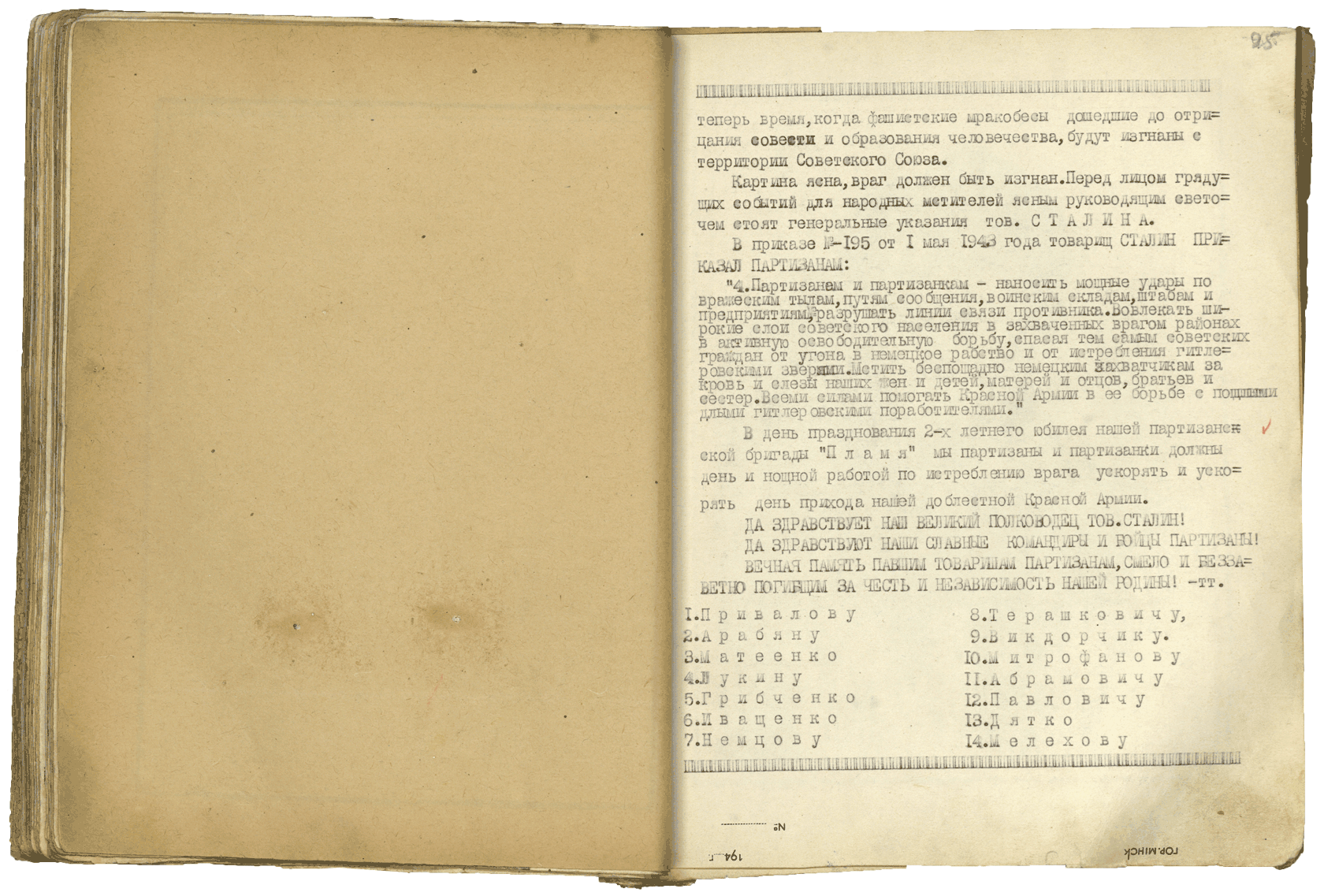 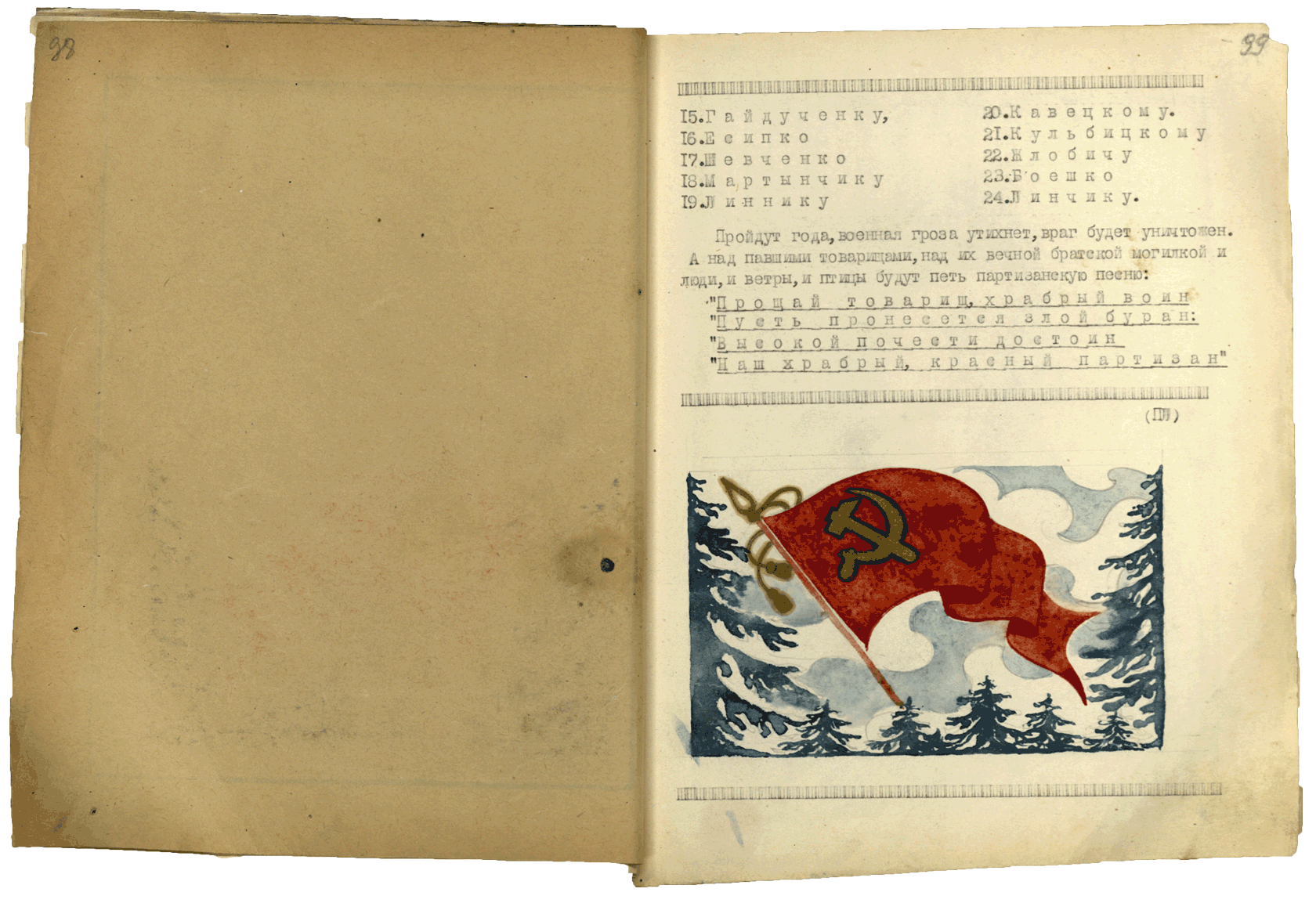 "Years will pass. The storm of the war will fade away. The enemy will be destroyed. And people, winds and birds will be singing a partisan song over the fallen comrades, over their eternal common grave."
Using the rules of military science and well-established intelligence, the partisans under the leadership of Evgeny Filipskikh carried out more than 140 sabotage attacks on the Minsk–Osipovichi railways. More than 1,500 rails were blown up by the partisan unit during the "rail war" in August 1943. Dozens of bridges on the Minsk–Mogilev and Minsk–Bobruisk highways were destroyed. Teamed up with the 65th Army of the First Belorussian Front, the Plamya brigade liberated Maryina Gorka on 1 July 1944. Evgeny Filipskikh was named Hero of the Soviet Union in August 1944.
In the wartime, poems and songs acquired extreme importance. They were written even by those who, in ordinary life, had never thought of taking up such a hobby. Finding the right words to convey every thought and feeling of a man in the war had never been easier before. 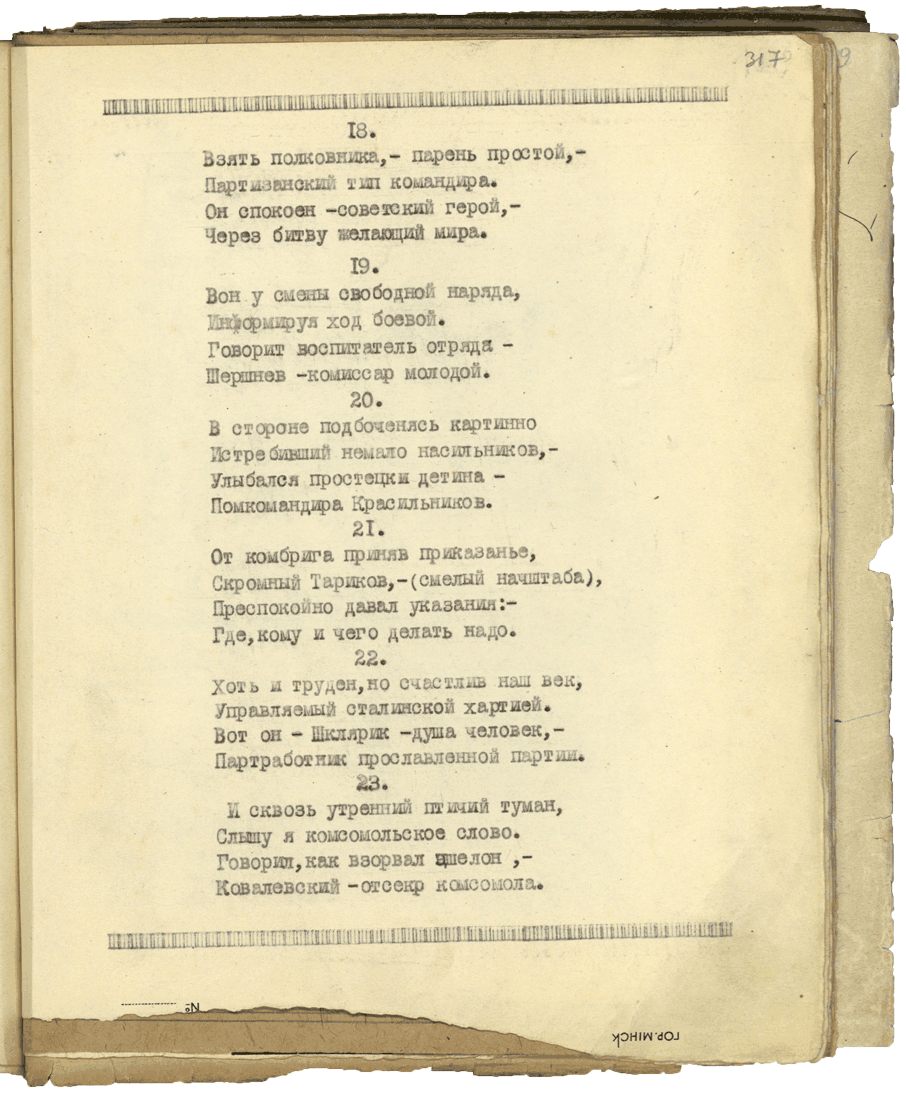 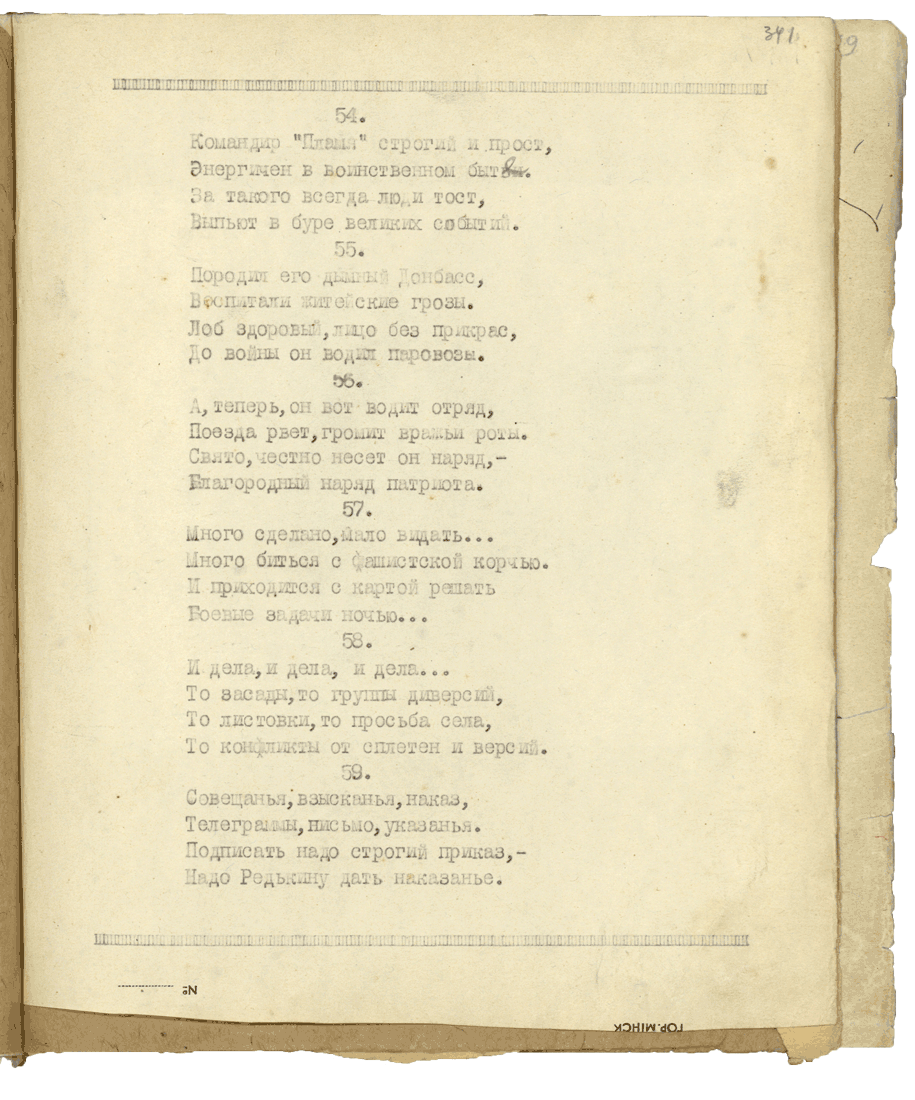 A brief characteristic of commander Evgeny Filipskikh is given in the poem Plamya (Flame) written by partisan Piotr Lavrov.
With emotional directness the poem also describes other commanders and soldiers:
After the war, Evgeny Filipskikh graduated from the Higher School at the Central Committee of the Communist Party of Belarus, worked as head of the transport department of the Minsk Oblast Committee of the Communist Party of Belarus. He died in summer 1953, at the age of 38, and was laid to rest at the military cemetery of the Belarusian capital. In this issue, we present the items of the hero's military ammunition, which the museum received from the family in October 1953:
Evgeny Filipskikh's personal belongings

Almost every page of this unique journal issue provides a vivid picture of the history of the partisan war by the Plamya (Flame) brigade. Partisan artists were always shoulder to shoulder with partisans, carrying out tasks, mining roads, blowing up bridges, destroying Nazi garrisons. The themes for the journal were prompted by the life and fight behind the enemy lines. The handwritten journal Plamya was created by two well-known artists: Vladimir Sukhoverkhov and Sofia Li. With the help of watercolors, gouache and pencils the Belarusian artists made more than 100 illustrations of different type and genre. A portrait gallery of partisans created by Vladimir Sukhoverkhov impresses with its highly professional level. 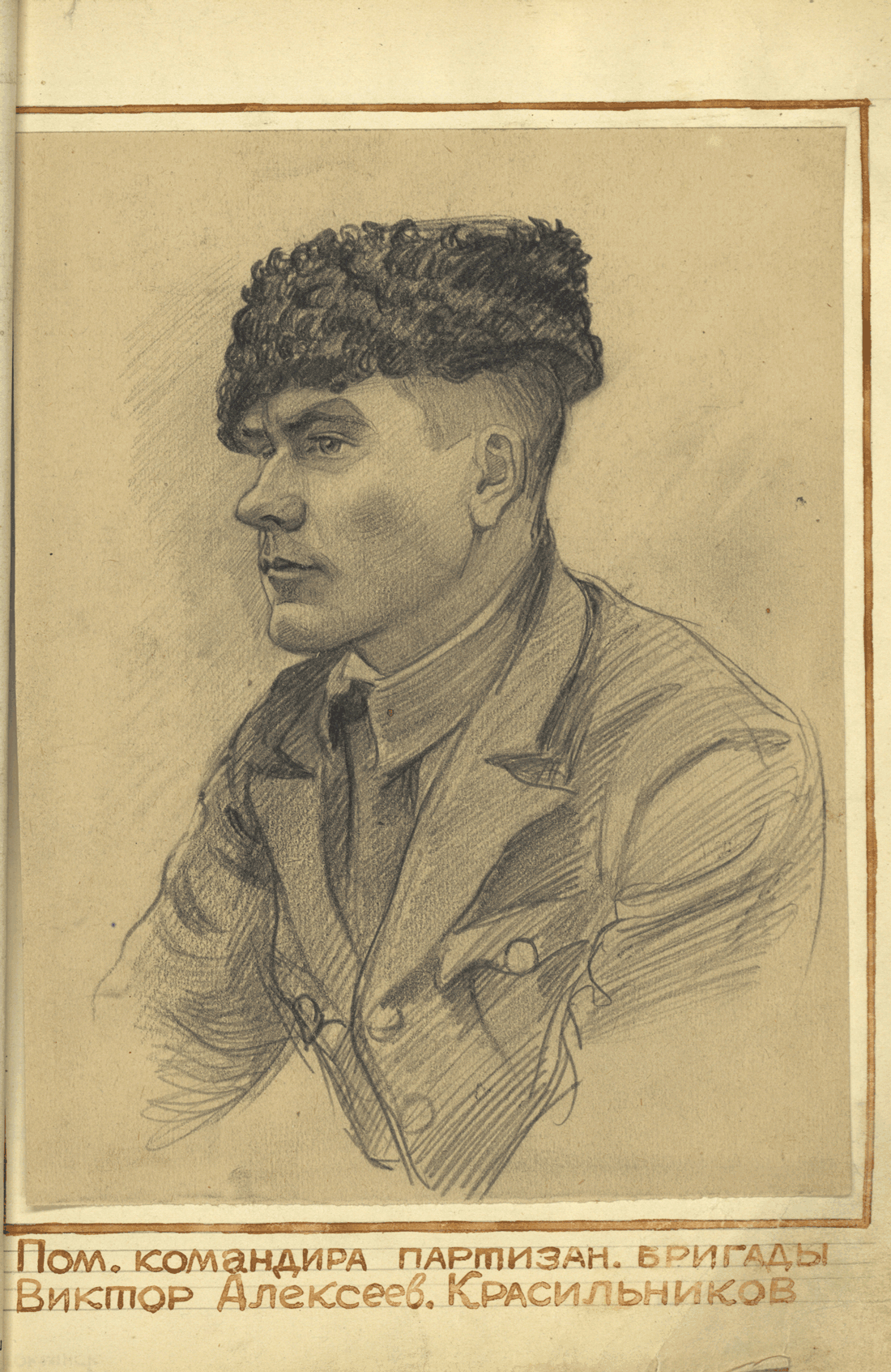 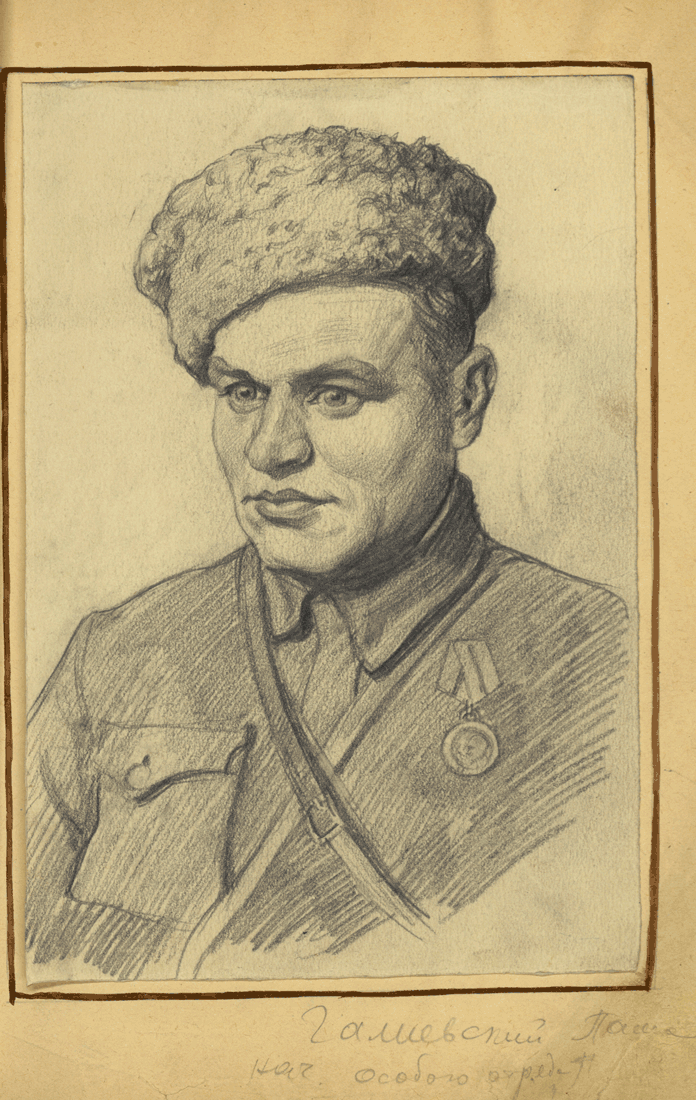 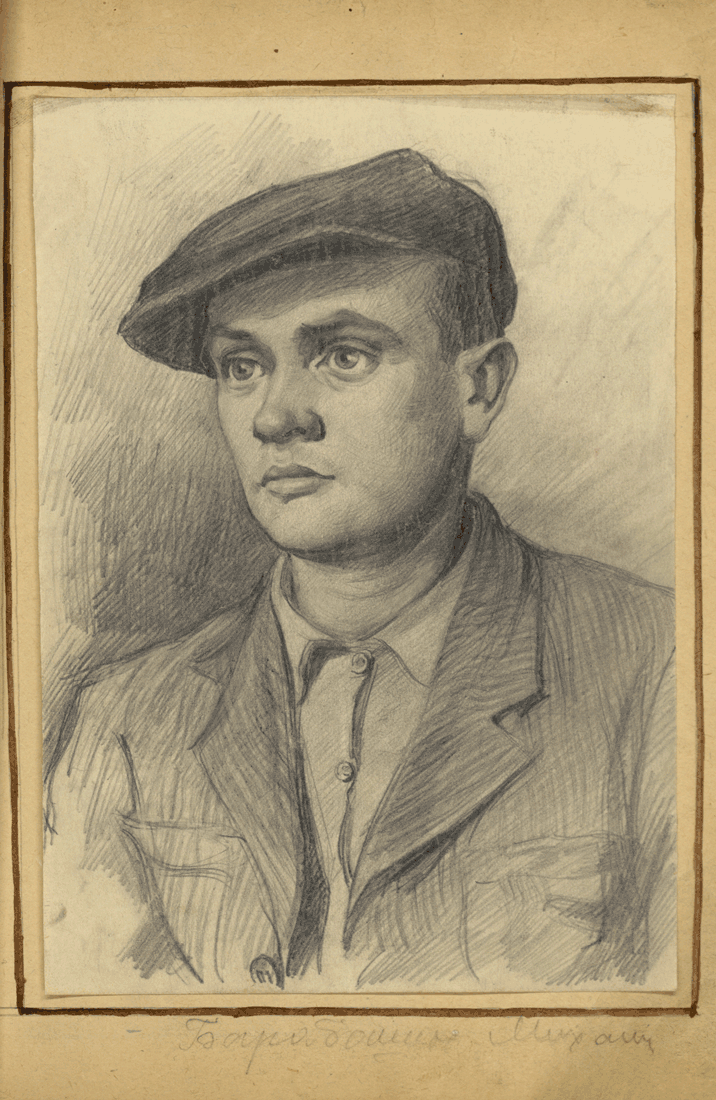 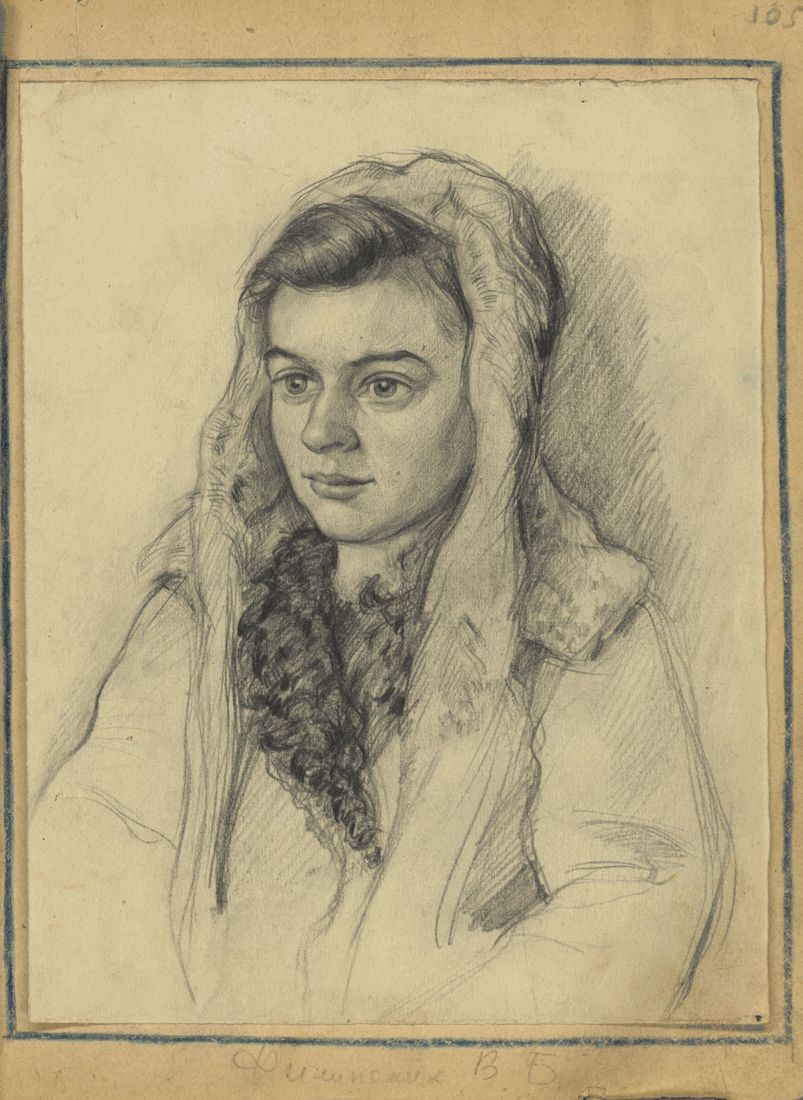 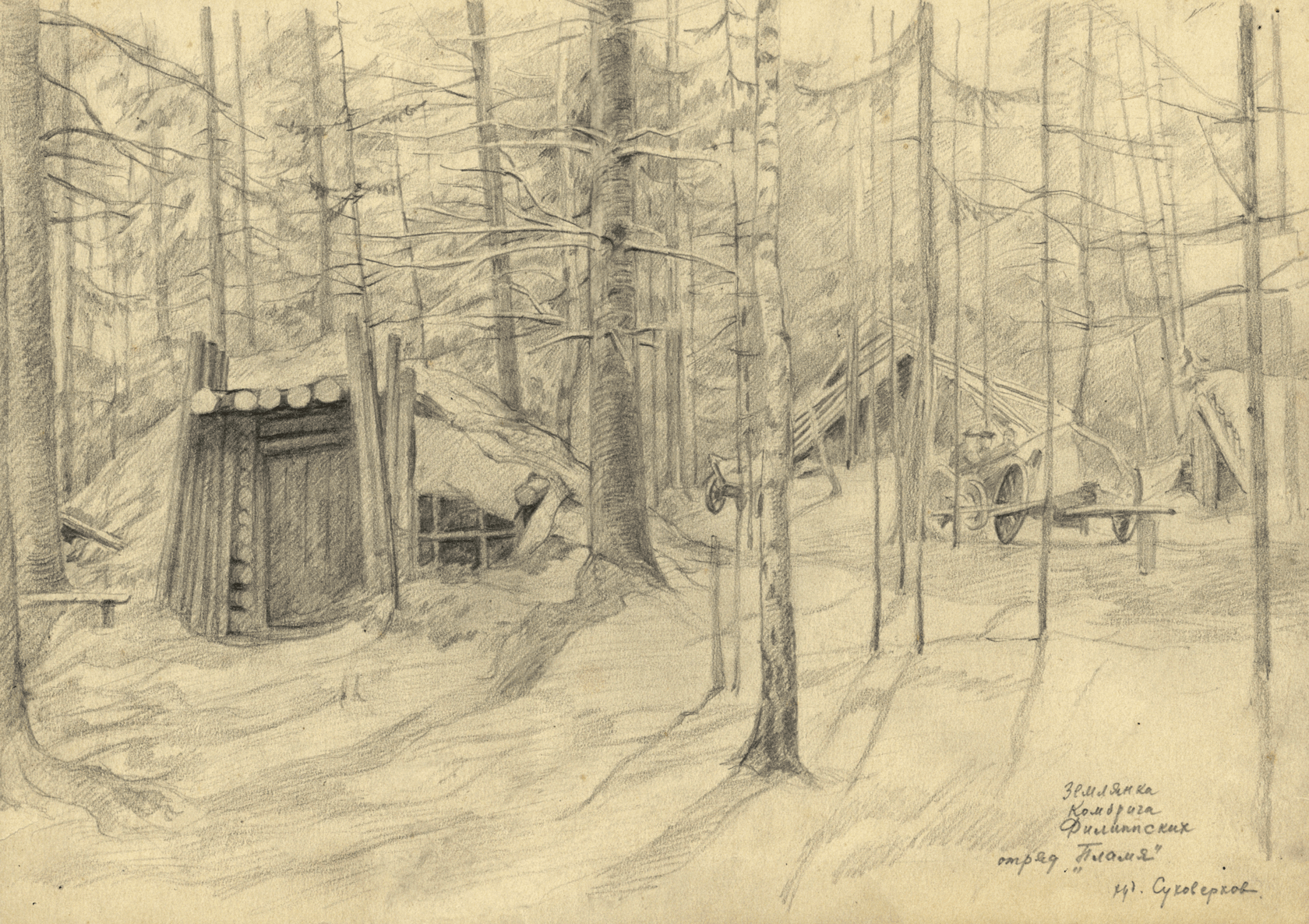