29
To the beginning
Previous page
Records were made wherever and whenever possible – in dugouts, between the battles, on wallpaper, exercise books, office books…

Handwritten partisan journals were kept together with important documents. They contained facts and figures interspersed with stories about the daily grind, battles and heroes. Handmade 'books' were pepped up by pictures and unfailing sense of humor. They were circulated to raise morale. They were read to draw strength.
PAGE
Next page
ART BY PEOPLE'S AVENGERS
They went into combat, took rest, and fell with a song on their lips. Art played a huge role in the life of Belarusian partisans. Separated from the frontline army, they had to keep up their combat ability on their own, including the state of their weapons and the state of their spirit. Improvised workshops were set up in the field to take care of the former while partisan poets, writers, artists, and painters kept up the latter.
Handwritten journals were a unique and precious collection of works by the "forest" fighters. Their art genres and forms varied a lot. The works were inspired by genuine events, facts, and episodes of their lives in and out of combat.
Poem Girl Friend by V. Smirnov, National Avenger journal, Issue No.2, Voronyansky Brigade, 1944
Works by the partisan poets were primarily dedicated to the heroic fight against the enemy and to memory of the fallen.
V. Smirnov's poem Girl Friend was published in the April issue of the National Avenger magazine of the Voronyansky brigade. The poem tells readers about minutes of rest partisans spend before a firefight by singing traditional songs around a campfire. 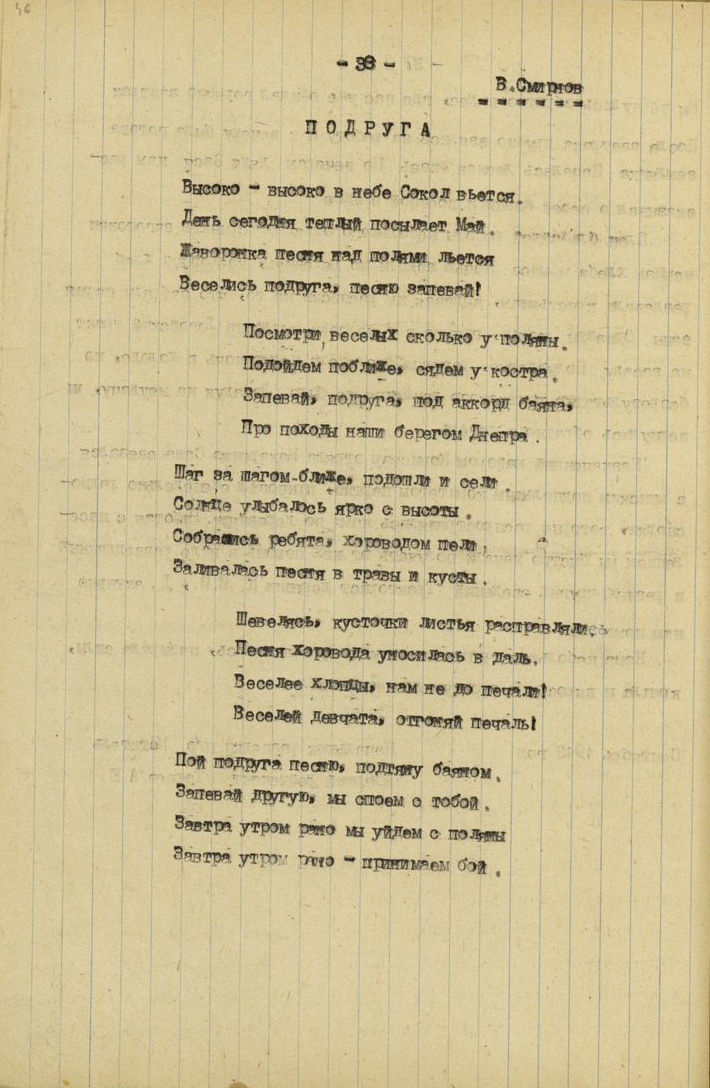 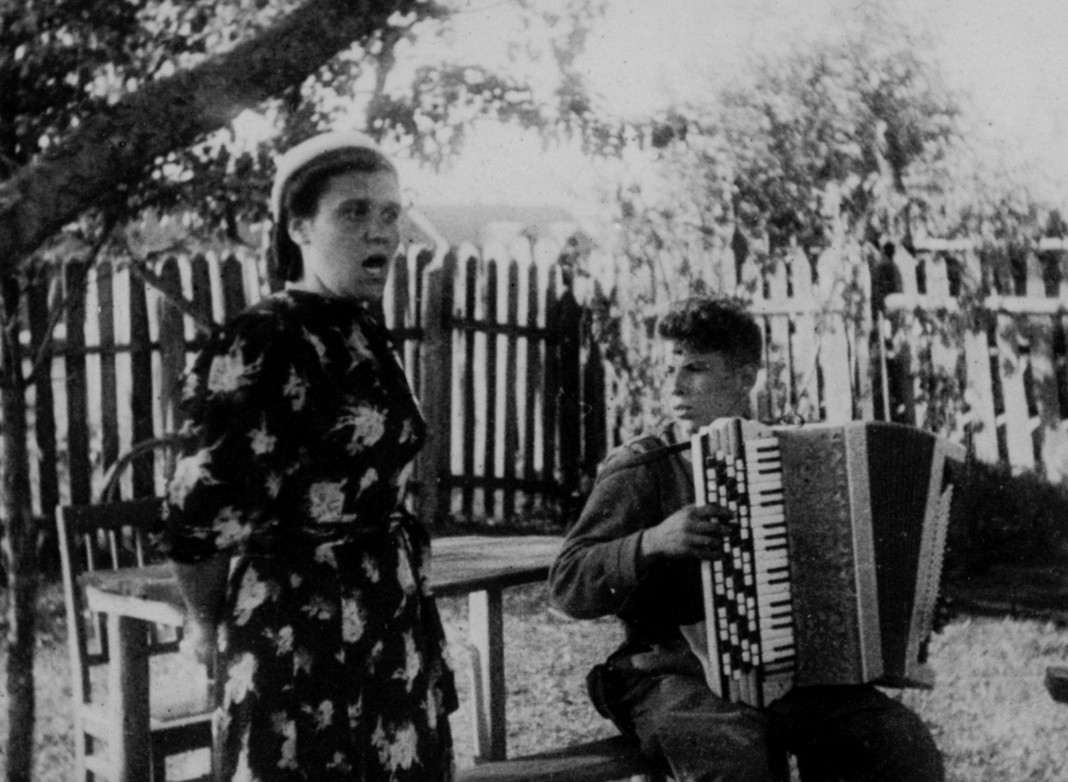 Photo from the museum's archives 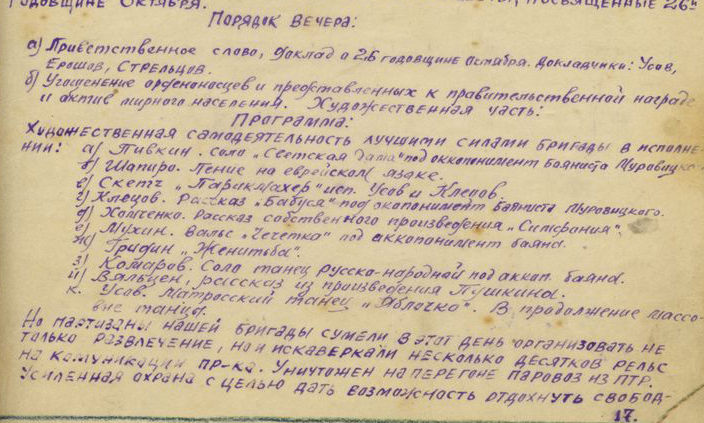 During a respite fighters sang songs written by partisan poets. For example, fighters of Suvorov Brigade No.1 sang About Petya The Demolitionist written by commissar Nikolai Usov to the tune of the song Three Tank Crew Members. 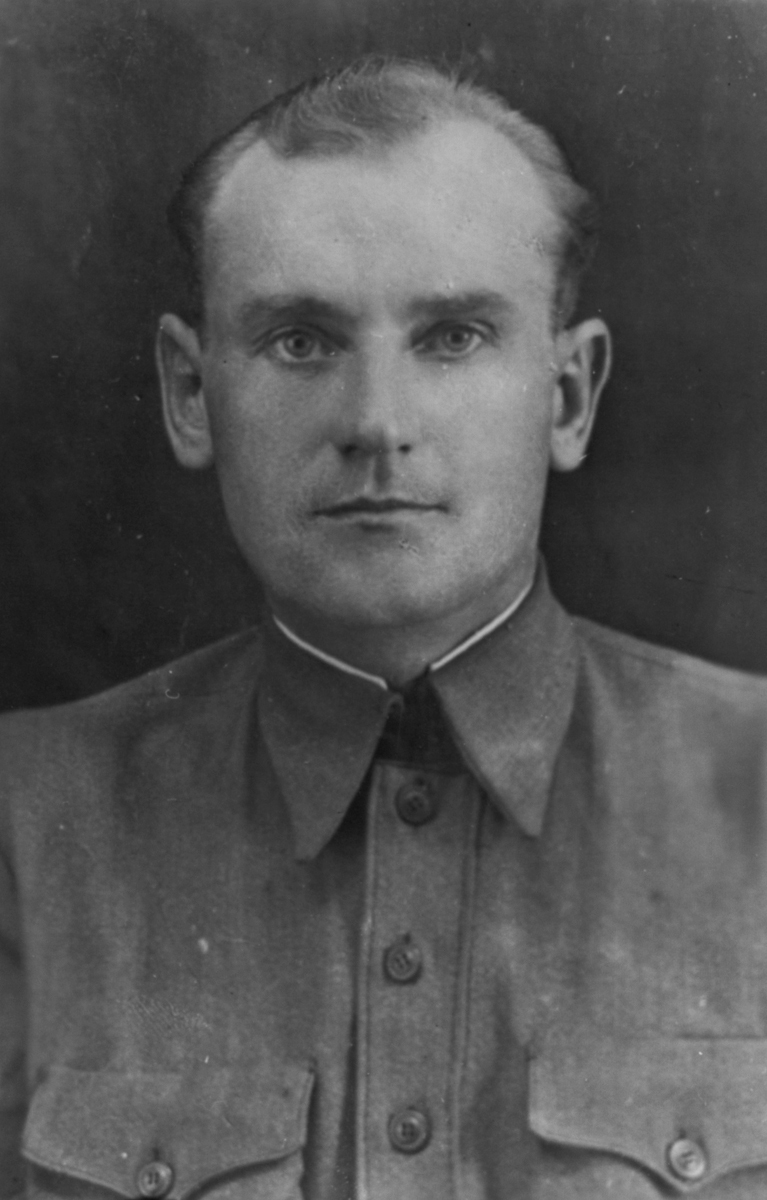 Song About Petya The Demolitionist written by commissar Nikolai Usov in the handwritten journal of Suvorov Brigade No.1.

Songs Gift for a German Earth-And-Timber Emplacement and Belarusian Partisan Song in the handwritten journal of Suvorov Brigade No.1.
In March 1944 the National Avenger journal published a poem First Loss by songwriter Alexander Mikhailov. The poem is about a partisan who was killed trying to repel Nazis approaching one of Belarusian villages. The characters of national avengers and villagers in this poem are generalized. Some local residents mentioned in the poem sympathized with partisans, others chose to adjust to the Nazi rule. 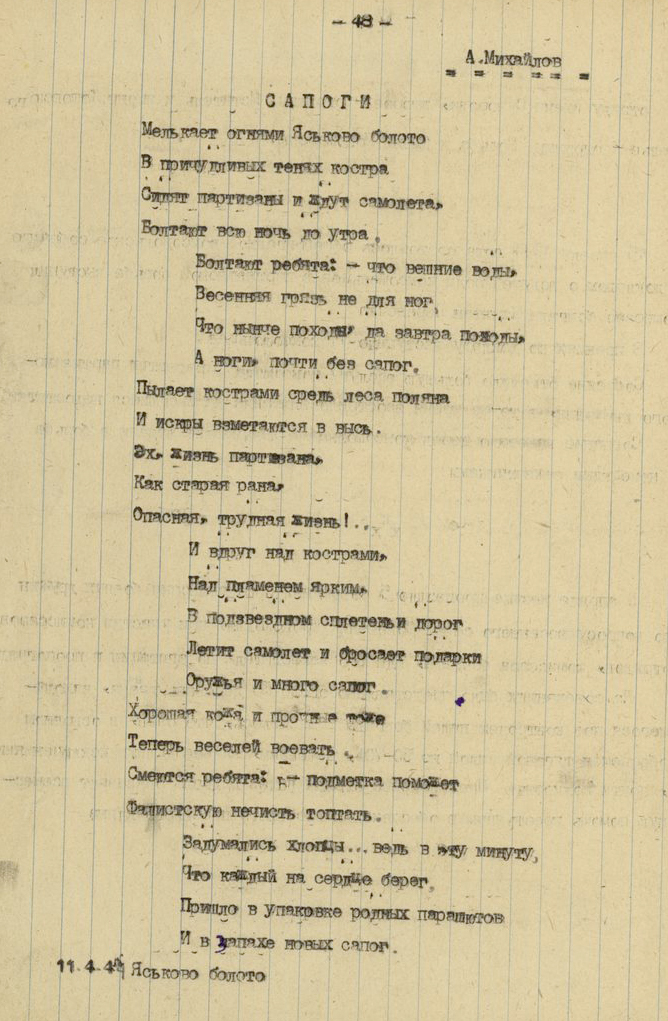 In the April issue of the handwritten magazine National Avenger Alexander Mikhailov's piece of poetry Boots conveys a joyous atmosphere of looking forward to the arrival of an aircraft with supplies
Alexander Mikhailov's piece of poetry Boots from the handwritten magazine National Avenger of the Voronyansky brigade, 1944
Alexander Mikhailov graduated from the Voronezh Theater Vocational School and worked in the Moscow State Variety Theater before the war. His destiny during the war was not simple. He served in a rifle regiment, got surrounded, captured, and put into a POW camp… Escaped. As part of the Kotovsky partisan unit of the National Avengers brigade he fought as a squad leader till 1944. He was awarded a Medal for the Partisan of the Patriotic War, 1st class. 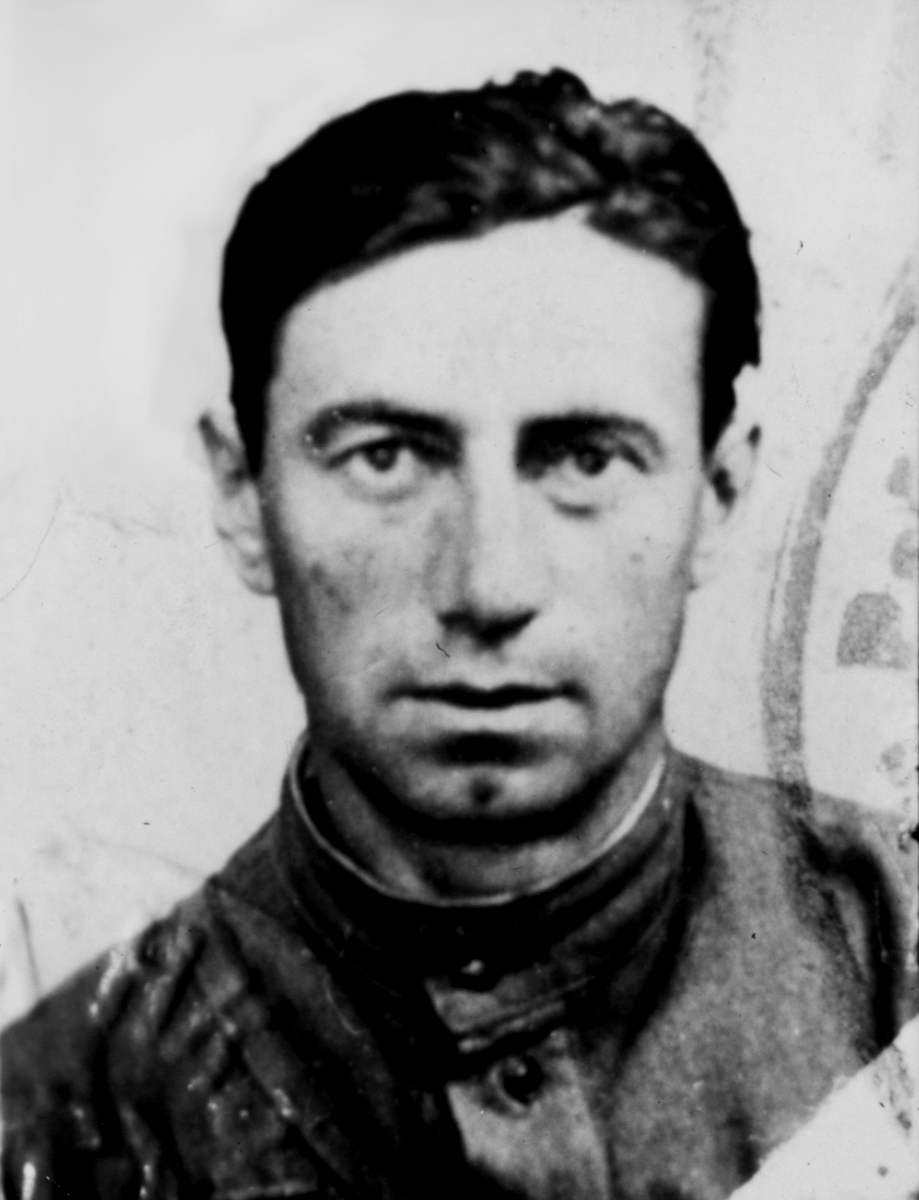 Alexander Mikhailov began writing children's poems in the 1920s. In 1939, he won the second prize at the oblast literary contest in Yaroslavl. As a commissioner, he conducted amateur art groups, wrote combat leaflets, journals, and small books.
Photo from the museum's archives
Partisan satiric rhymes were commonplace in the handwritten journals, which were also rich in political and ideological content, drawings and caricatures. 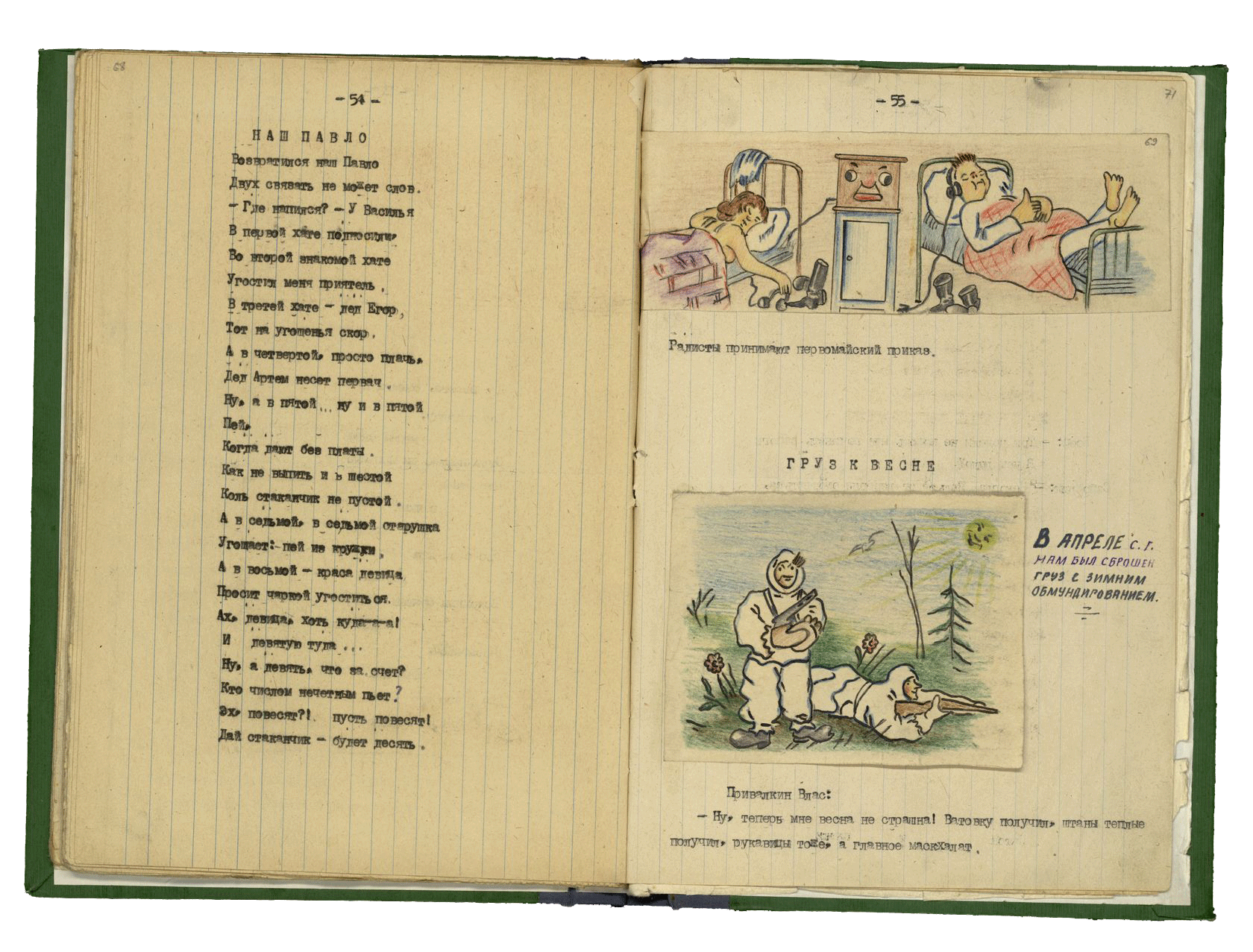 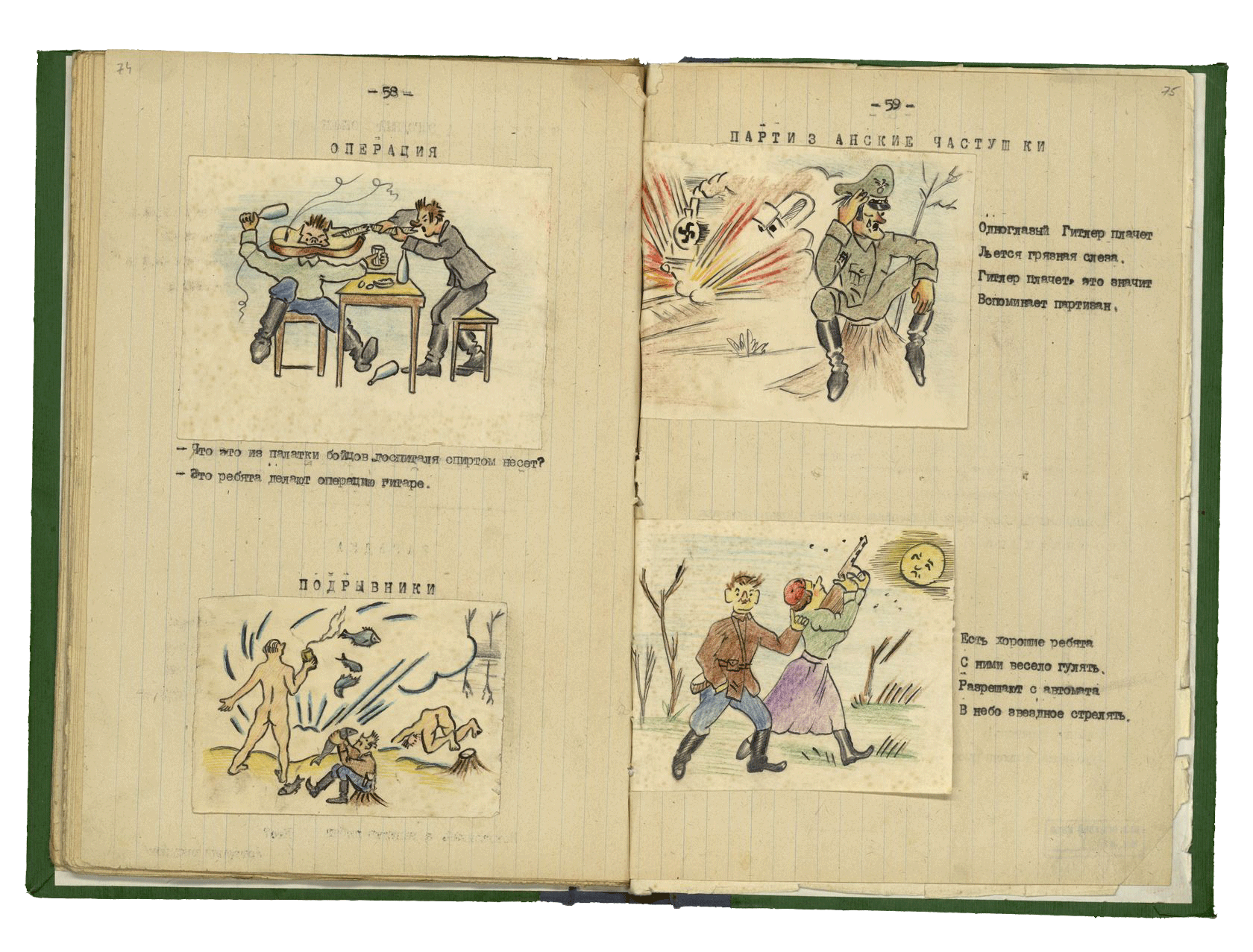 Using various genres and styles like poetry, prose, and drawings, national avengers tried hard to reveal the true nature of the Nazis and perpetuate the feat of the heroes. Handwritten journals became an invaluable depository of the people's "forest" art.
Handwritten journal, Suvorov Partisan Brigade No. 1
National Avenger handwritten journal, Issue No. 2, April 1944