17
To the beginning
Previous page
Records were made wherever and whenever possible – in dugouts, between the battles, on wallpaper, exercise books, office books…

Handwritten partisan journals were kept together with important documents. They contained facts and figures interspersed with stories about the daily grind, battles and heroes. Handmade 'books' were pepped up by pictures and unfailing sense of humor. They were circulated to raise morale. They were read to draw strength.
PAGE
Next page
UNCLE KOSTYA'S BRIGADE.
HERO OF THE SOVIET UNION
KONSTANTIN ZASLONOV 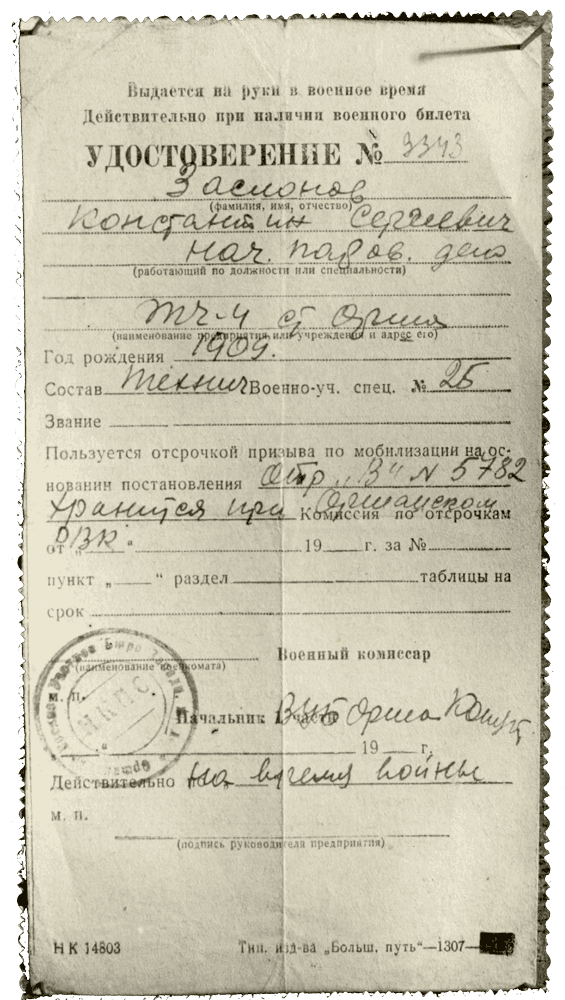 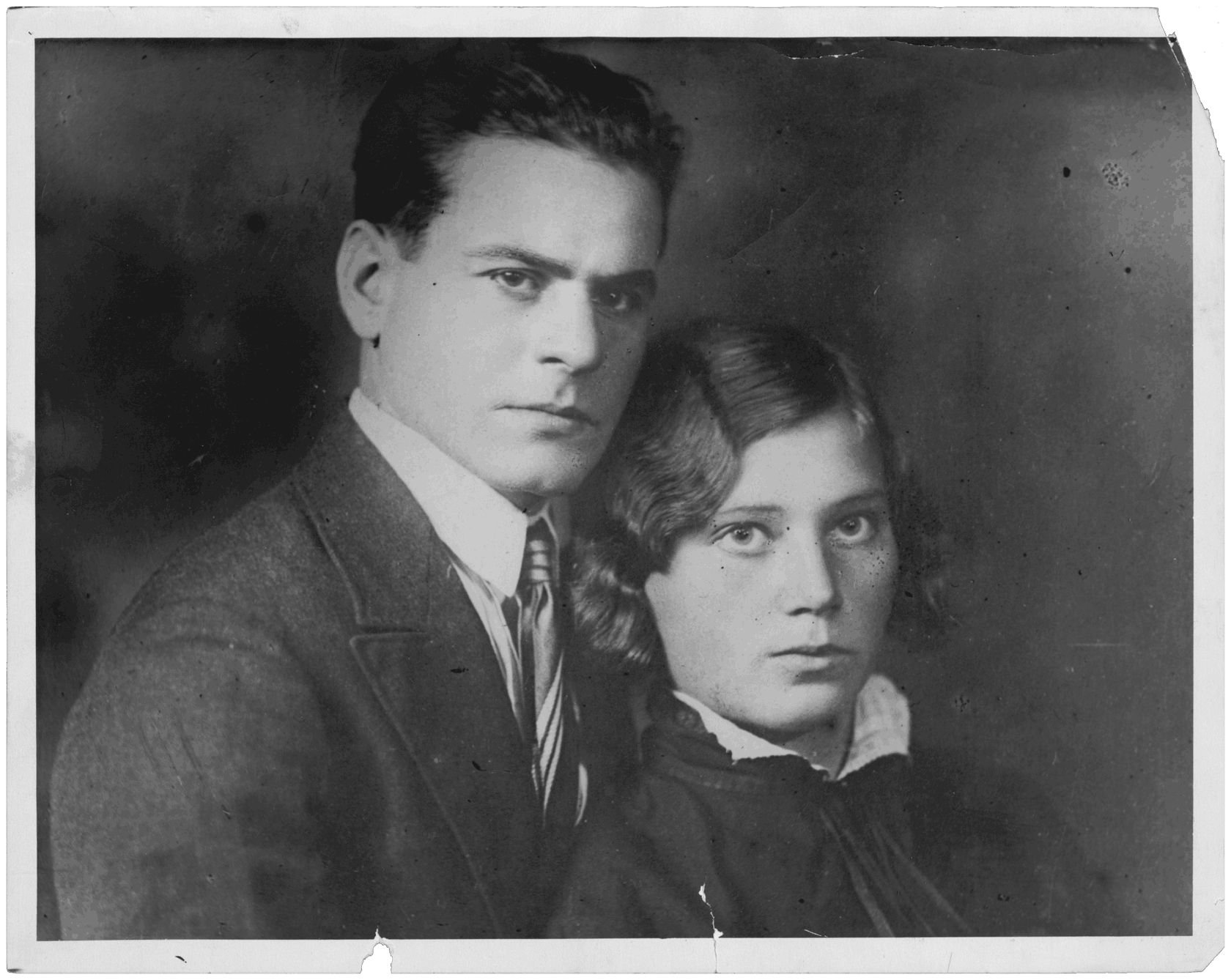 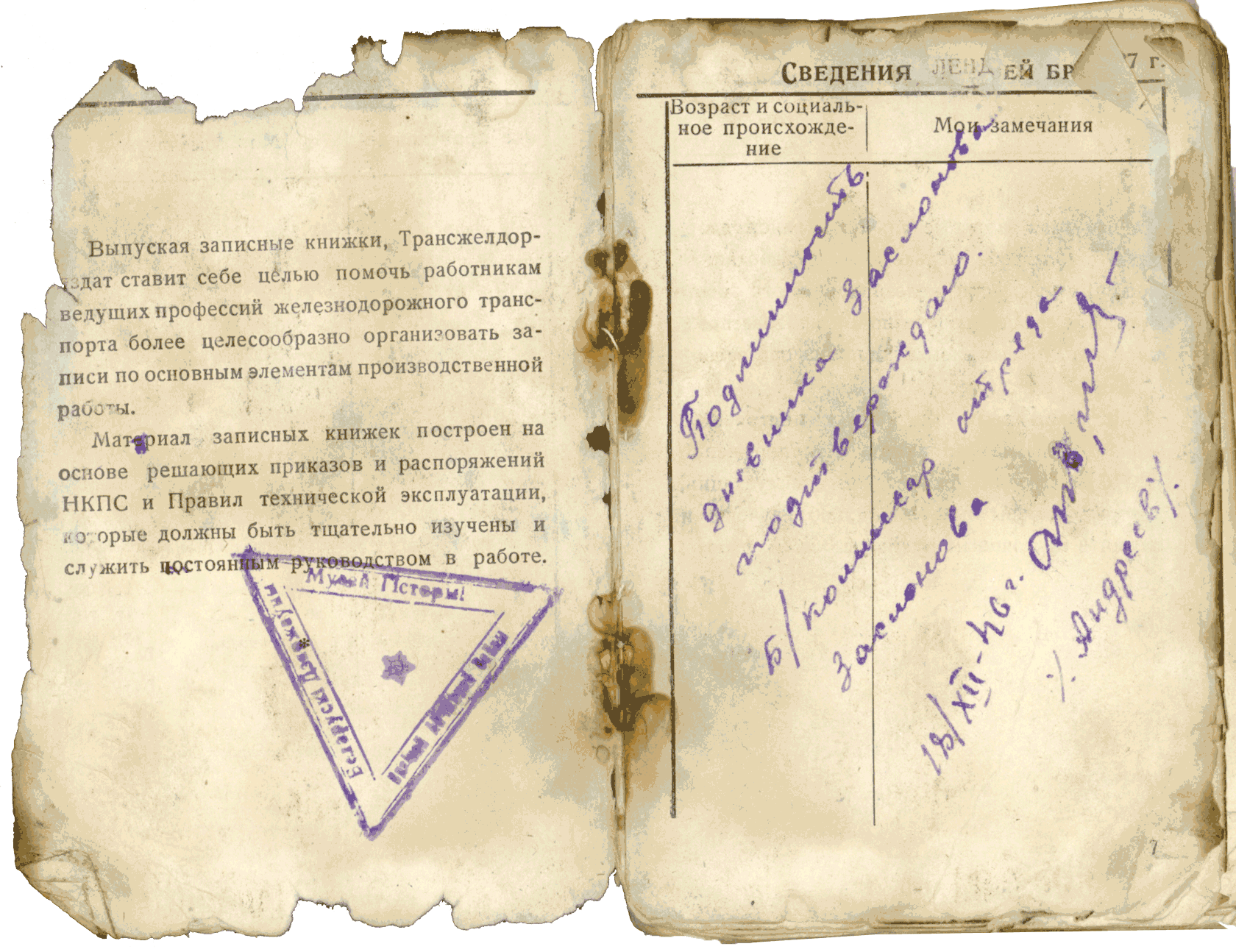 Konstantin Zaslonov's notebook
In the autumn of 1941 a reconnaissance and sabotage group of 40 volunteers from among railway workers led by depot head Konstantin Zaslonov crossed the front line. Only eight made it from Moscow to Orsha. Here Konstantin Zaslonov managed to earn the trust of the invaders. He was appointed head of the local locomotive brigades. 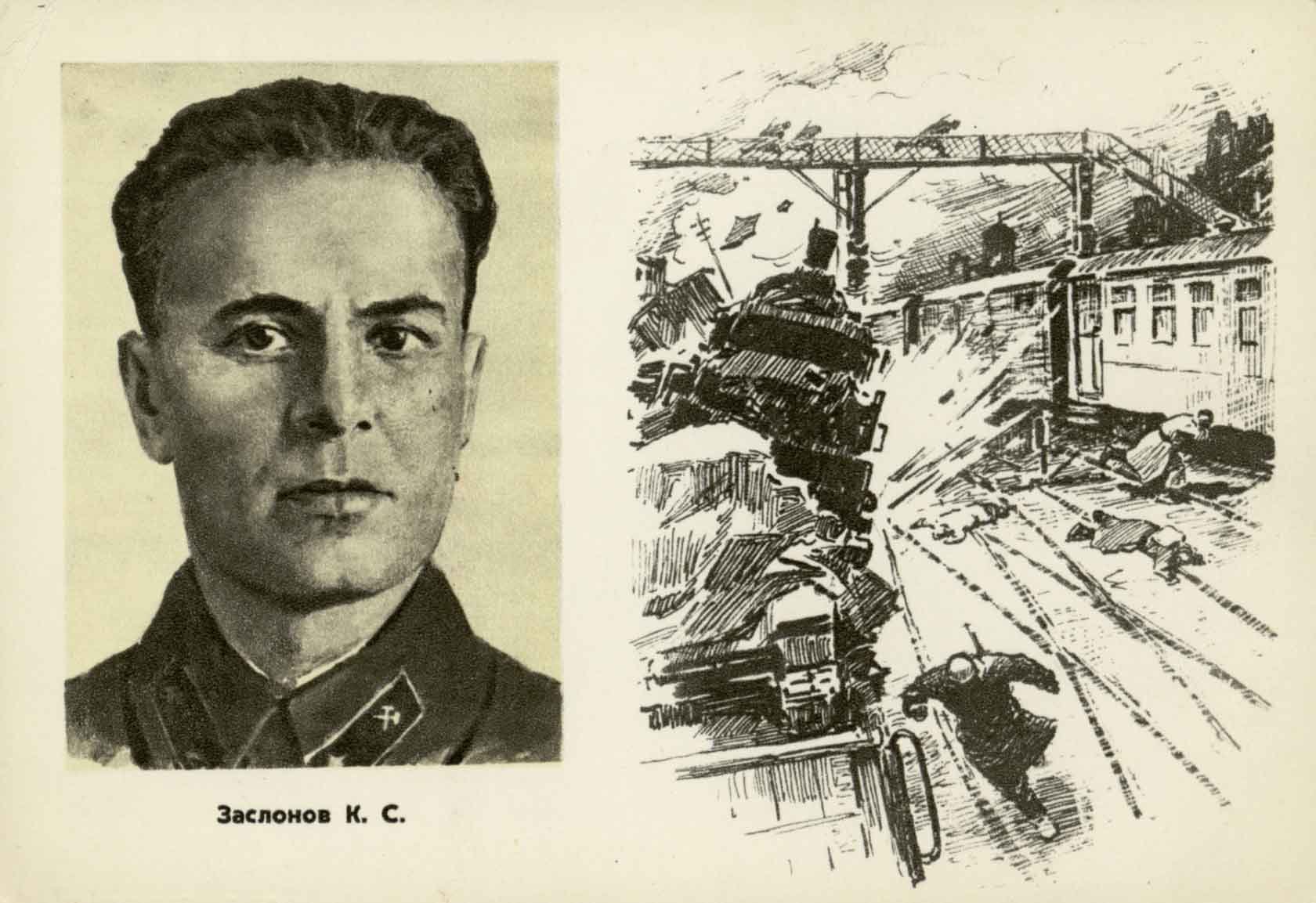 During three months the resistance fighters destroyed about 300 units of equipment and killed more than 400 fascists. Konstantin Zaslonov knew they would have to leave Orsha someday and started working on a forest base.
Photo from the museum's archives
In 1942 the unit called "Uncle Kostya" (Zaslonov's code name) welcomed new members. Those were mostly soldiers who broke out of encirclements or residents of nearby villages. By 1 July the unit expanded to become Konstantin Zaslonov Brigade No. 1.
Photo collage dedicated to Konstantin Zaslonov Unit 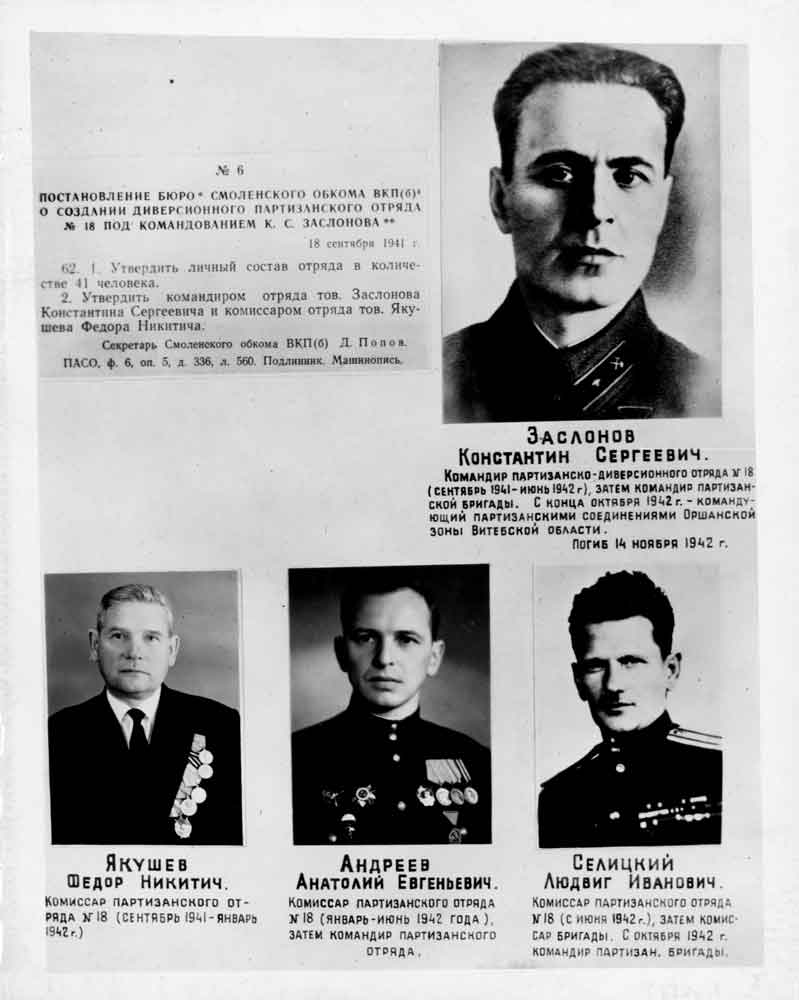 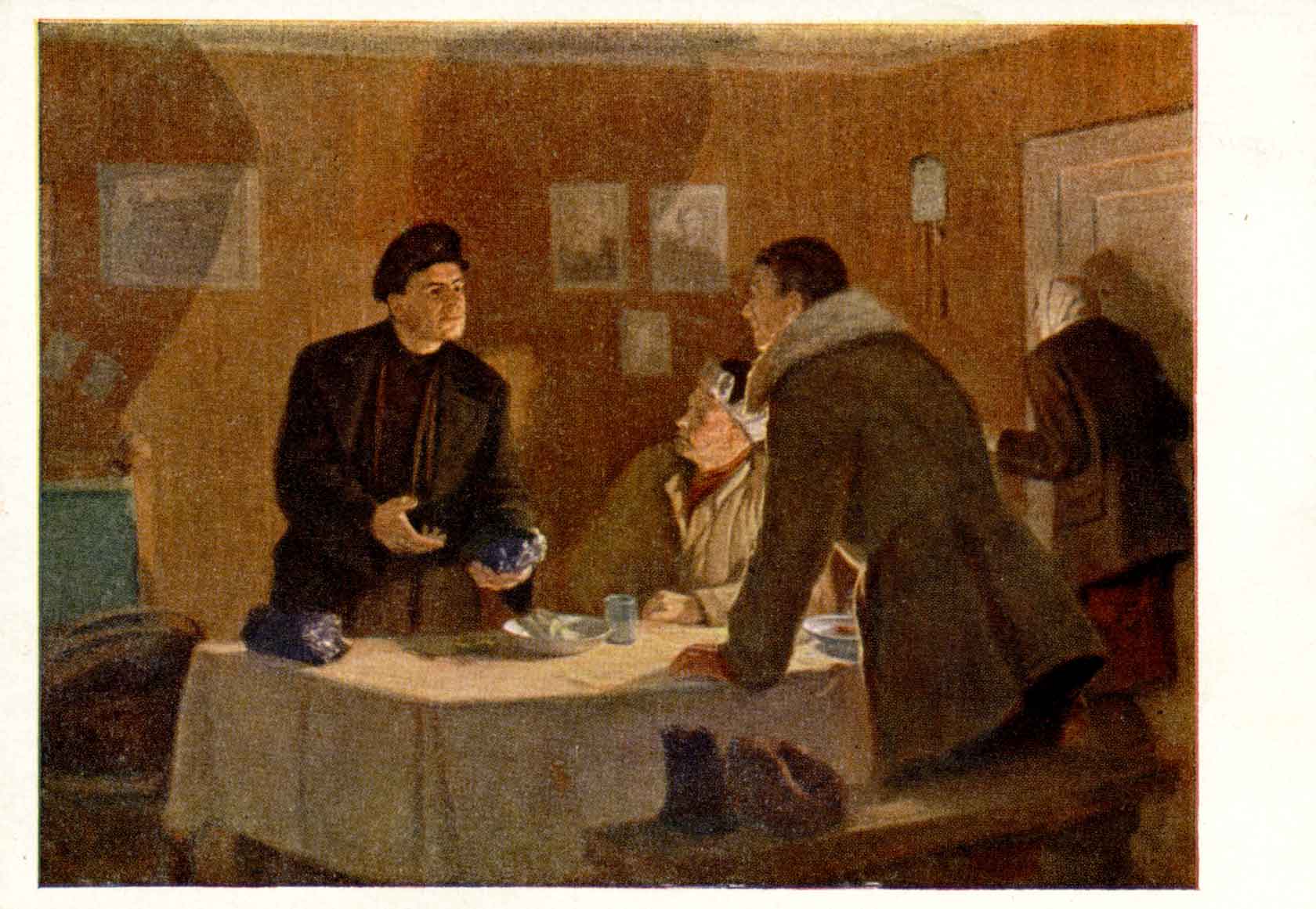 Postcard depicting a painting Konstantin Zaslonov by Vladimir Khrustalev, 1958
In the autumn the partisans made a three-month raid across Vitebsk Oblast. The Nazis offered 50,000 Reichsmarks, the Iron Cross and two big homesteads in Germany for life rent for the head of the courageous brigade commander. On 14 November, near the village of Kupovat, Senno District, the staff of the brigade was surrounded by a hit squad. The battle lasted for four hours. Konstantin Zaslonov spearheaded the attack and was killed in action. He was only 32. 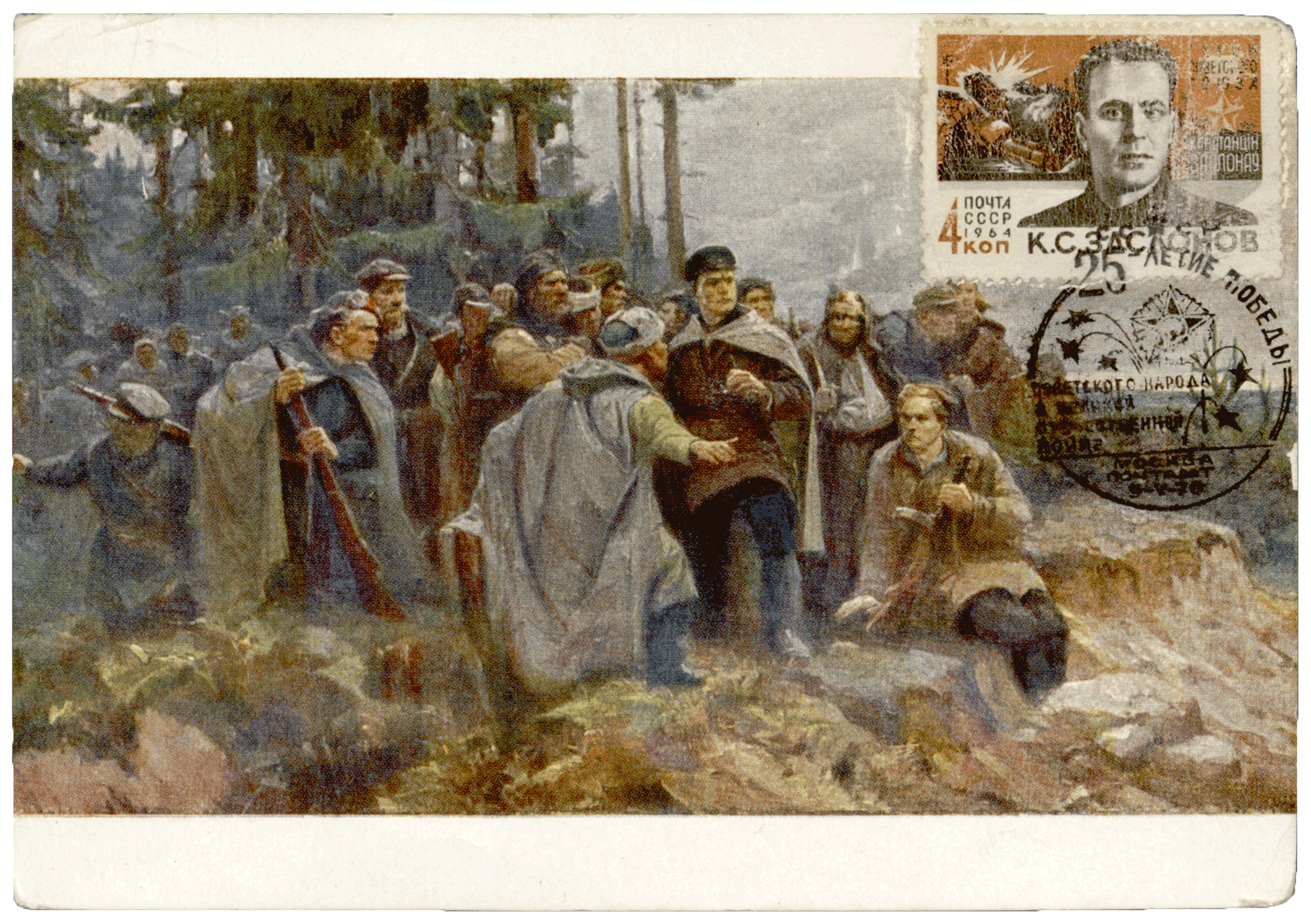 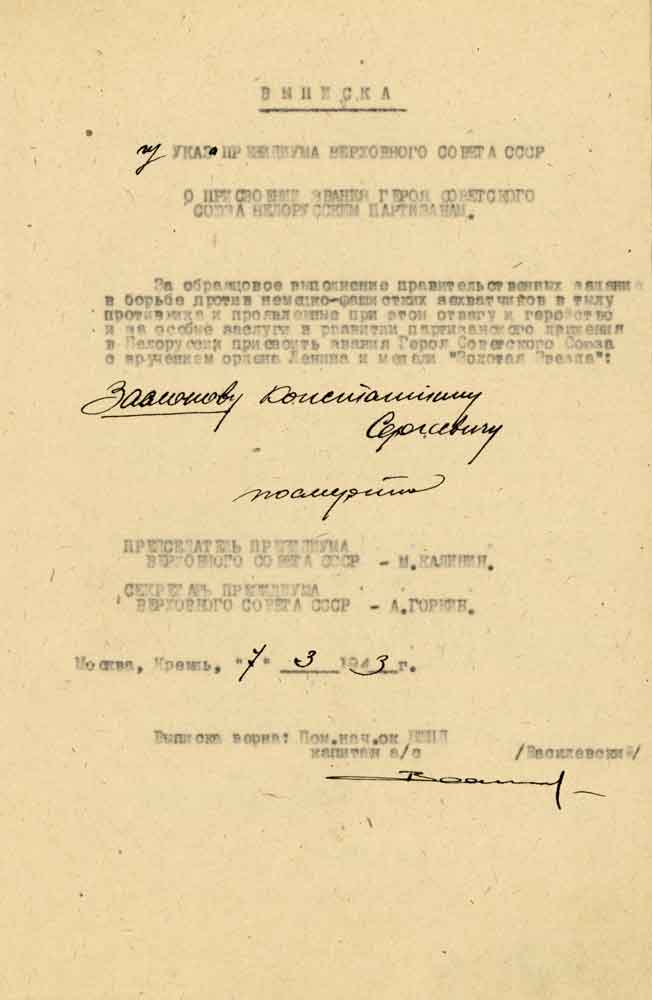 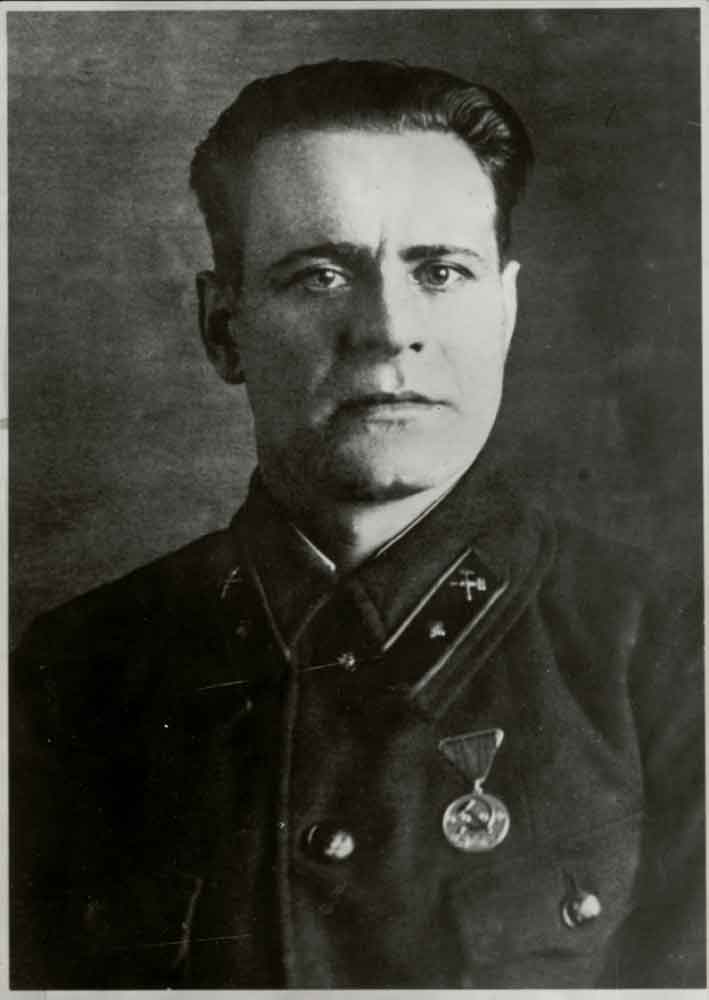 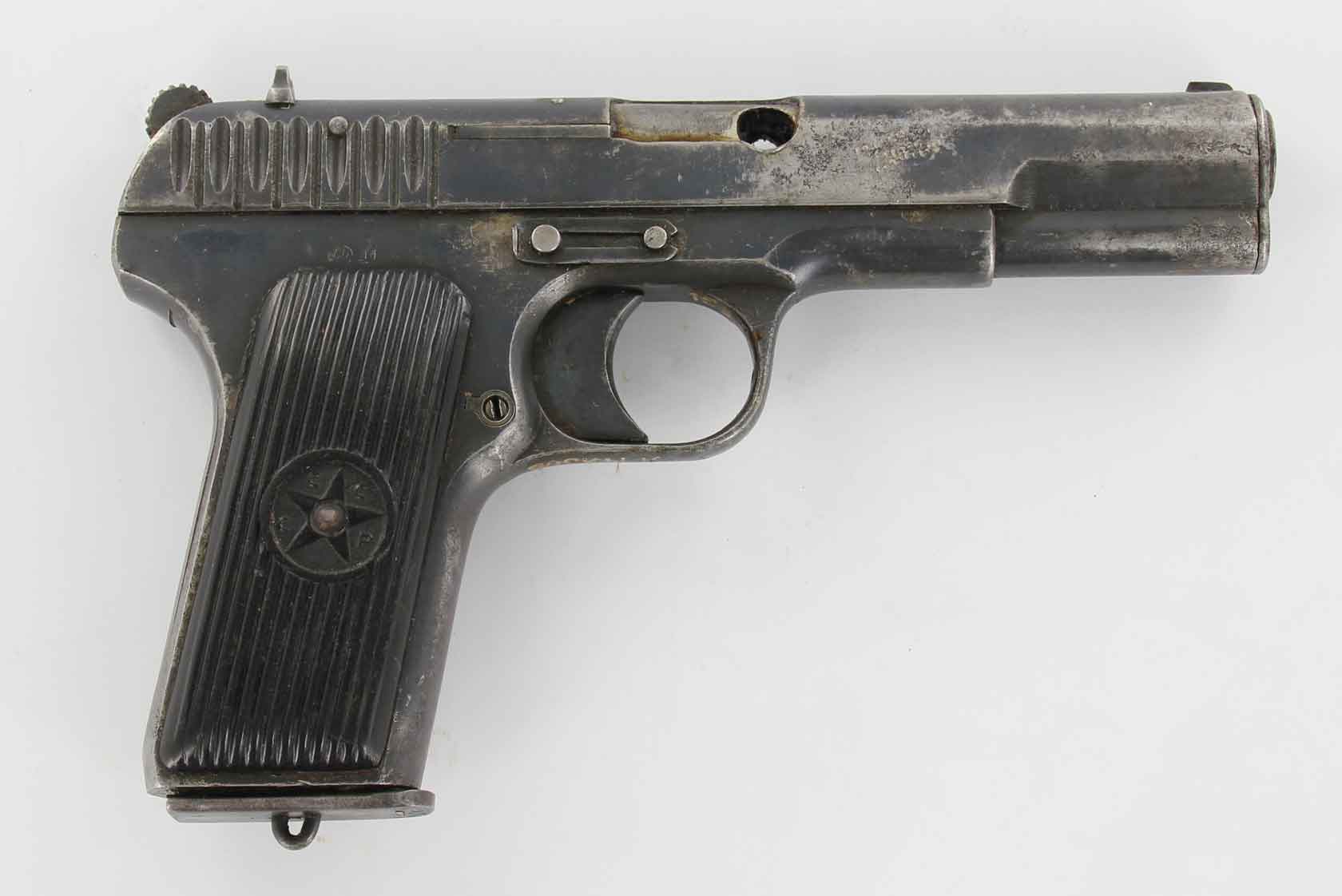 The spoon Konstantin Zaslonov used
Konstantin Zaslonov's personal TT pistol
Konstantin Zaslonov. Photo from the museum's archives
In 1944 the Zaslonov partisans presented the brigade's collection of literature and art works National Avenger to the deputy chief of the Belarusian staff of the partisan movement Iosif Ryzhikov. In the preface of the journal the brigade commissar Boris Ivanov wrote that "stories, poems and ballads about acts of bravery provide a detailed account of the striking personality of 'Uncle Kostya' and hundreds of heroes he had raised". 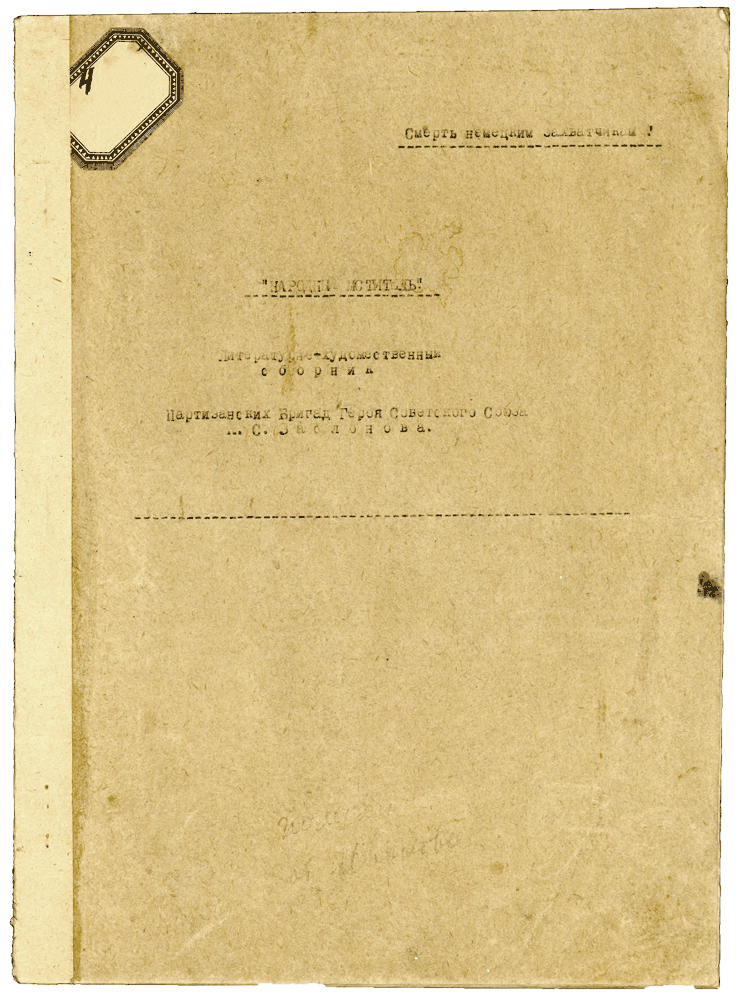 "The time will soon come when Nazi Germany will be completely defeated. Yet, the Great Patriotic War is still raging. Today we hold weapons in our hands. Hit the enemy hard! Every partisan must aim for it. Every poem, every line of this collection of poems calls upon the partisans for combat deeds."

Excerpt from the National Avenger journal, the Vitebsk Oblast brigades named after Hero of the Soviet Union Konstantin Zaslonov, 1944 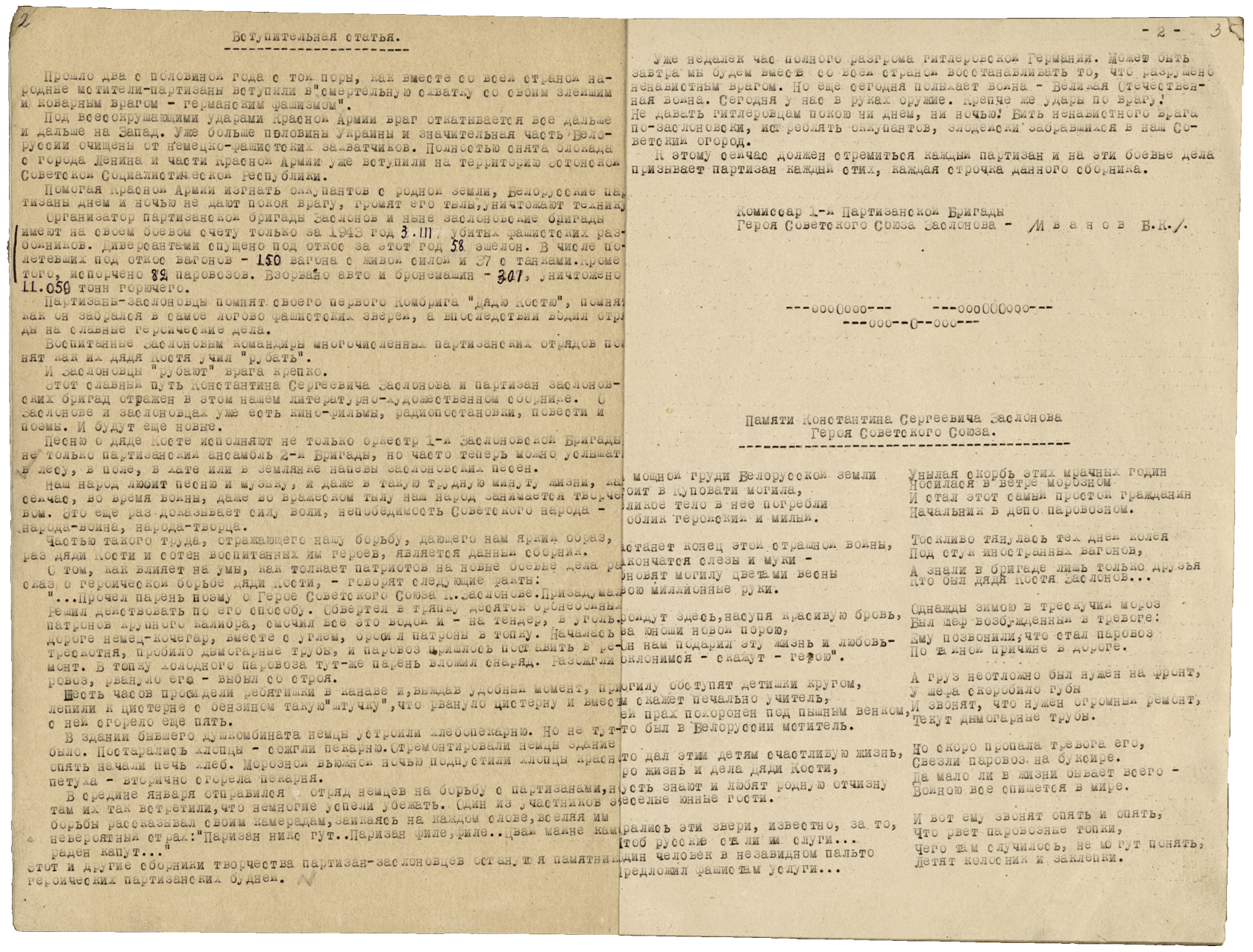 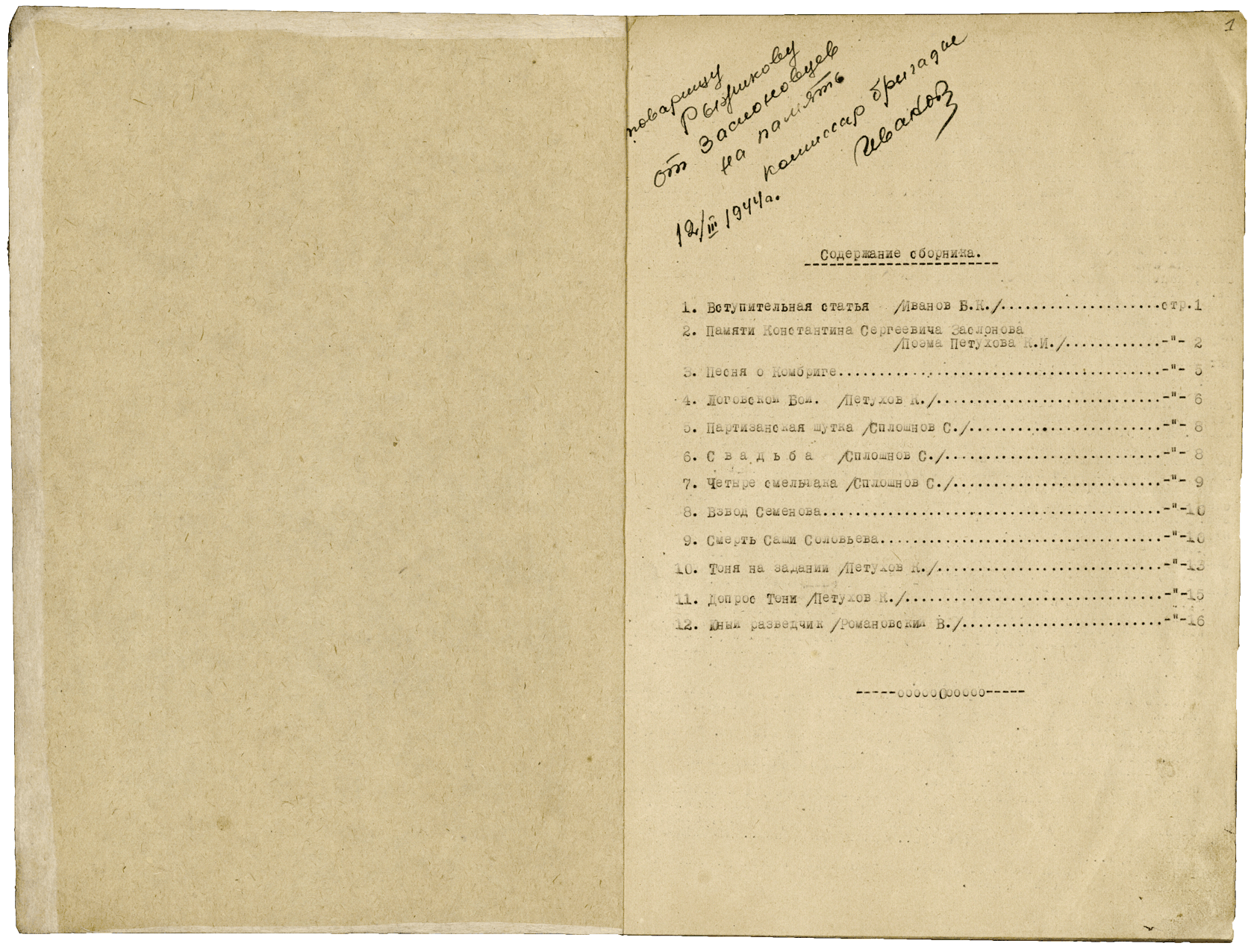 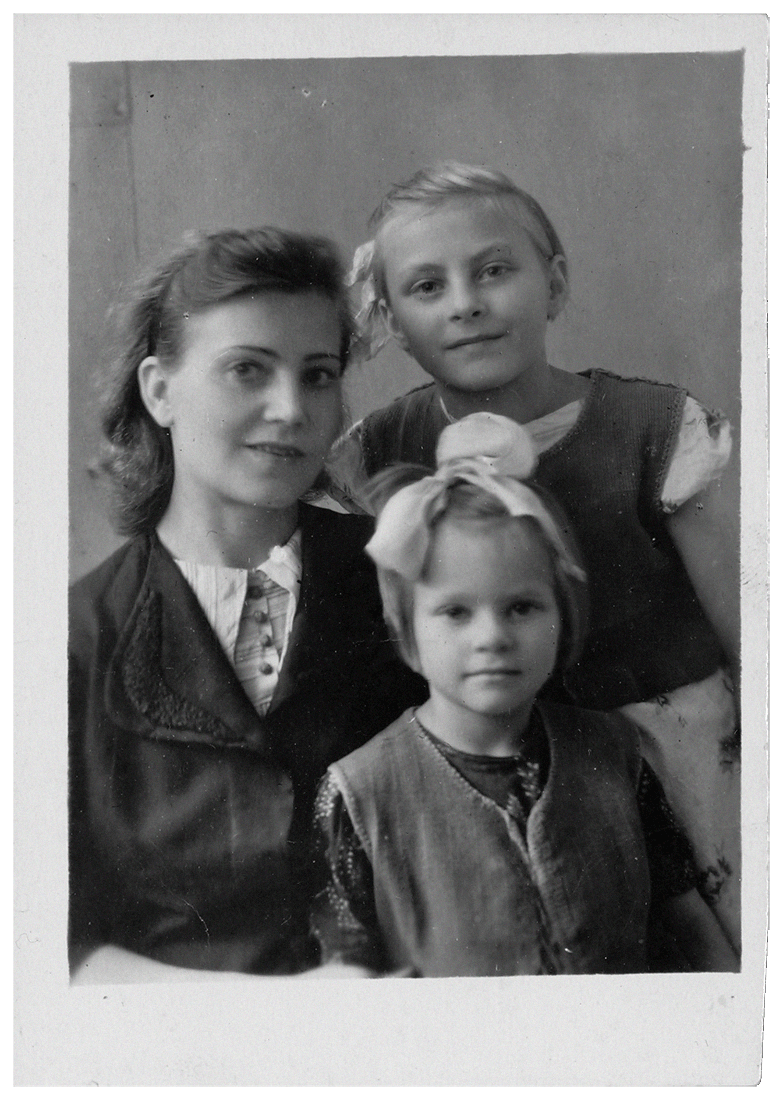 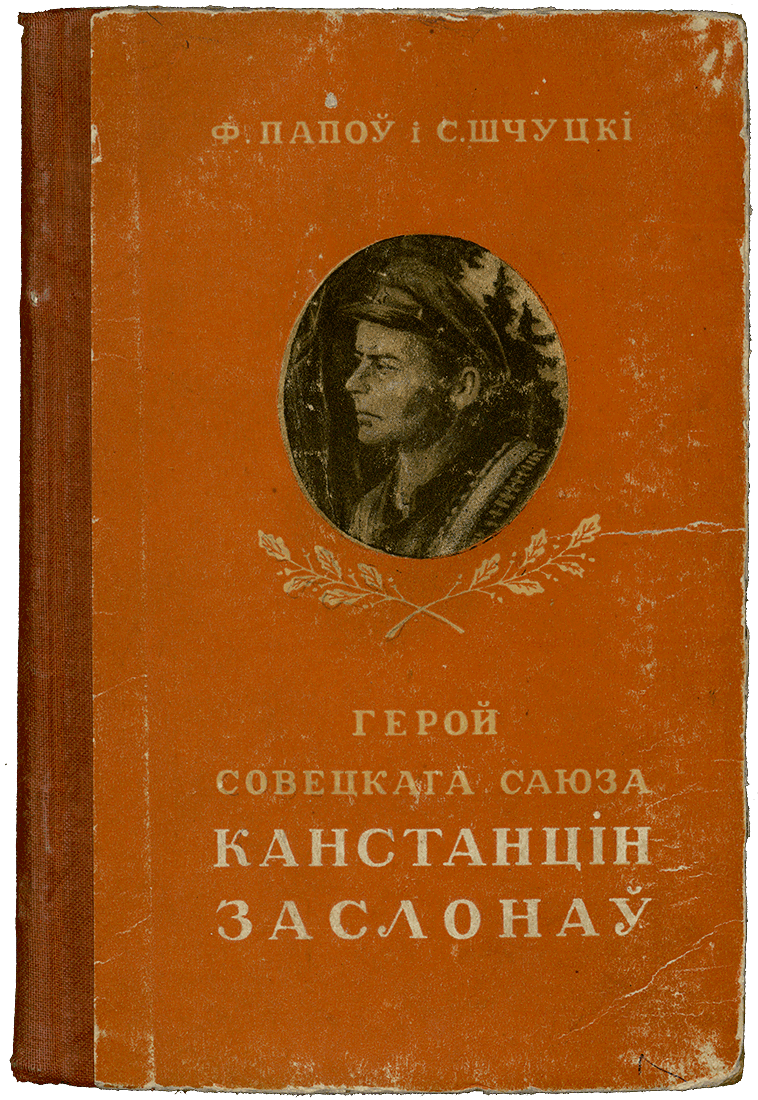 The National Avenger, like many other literary and publicist collections of partisans' works, became a handwritten monument to the heroic past. Thanks to Konstantin Zaslonov, members of the brigade got the chance to survive. They later joined the Red Army. After the war, the deeds of the legendary brigade commander were celebrated in films, theatrical plays, artworks, music and sculpture.
National Avenger journal of the partisan brigades named after Hero of the Soviet Union Konstantin Zaslonov, 1944