36
To the beginning
Previous page
Records were made wherever and whenever possible – in dugouts, between the battles, on wallpaper, exercise books, office books… 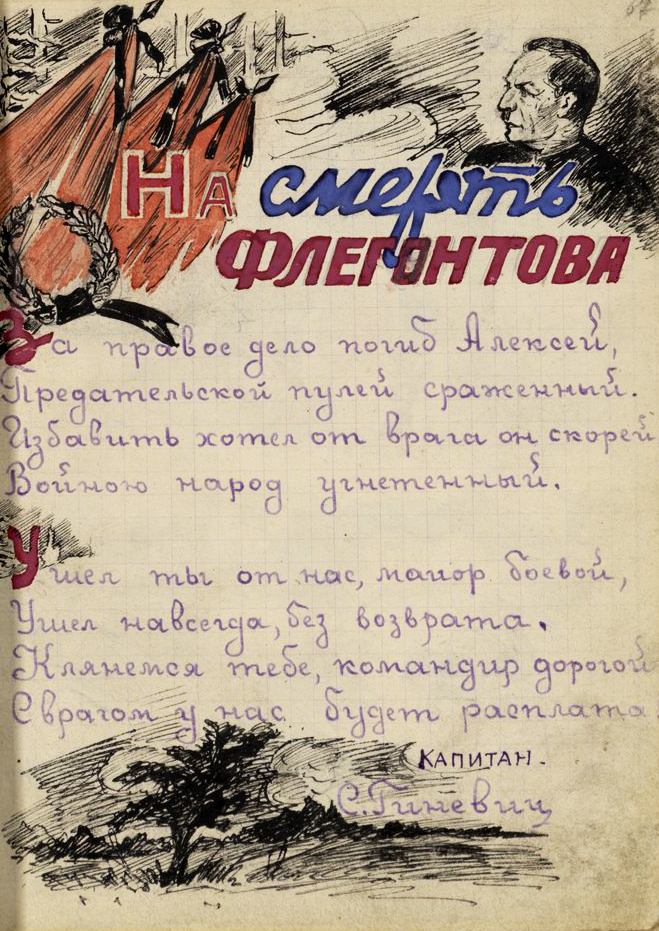 The collection of handwritten journals includes five issues made by the partisan units of the For Motherland Brigade named after Aleksei Flegontov in 1943.

Aleksei Flegontov initiated setting up the Boyevoi unit out from volunteers of the fighter battalion near Moscow in December 1941. In February 1942 Aleksei Flegontov was appointed its commander. On 21 August 1942 the cavalry unit detachment raided behind the enemy lines through the "Surazh Gate".

In October 1942 in Cherven District the Boyevoi unit was transformed into the partisan brigade For Motherland under the command of Aleksei Flegontov. 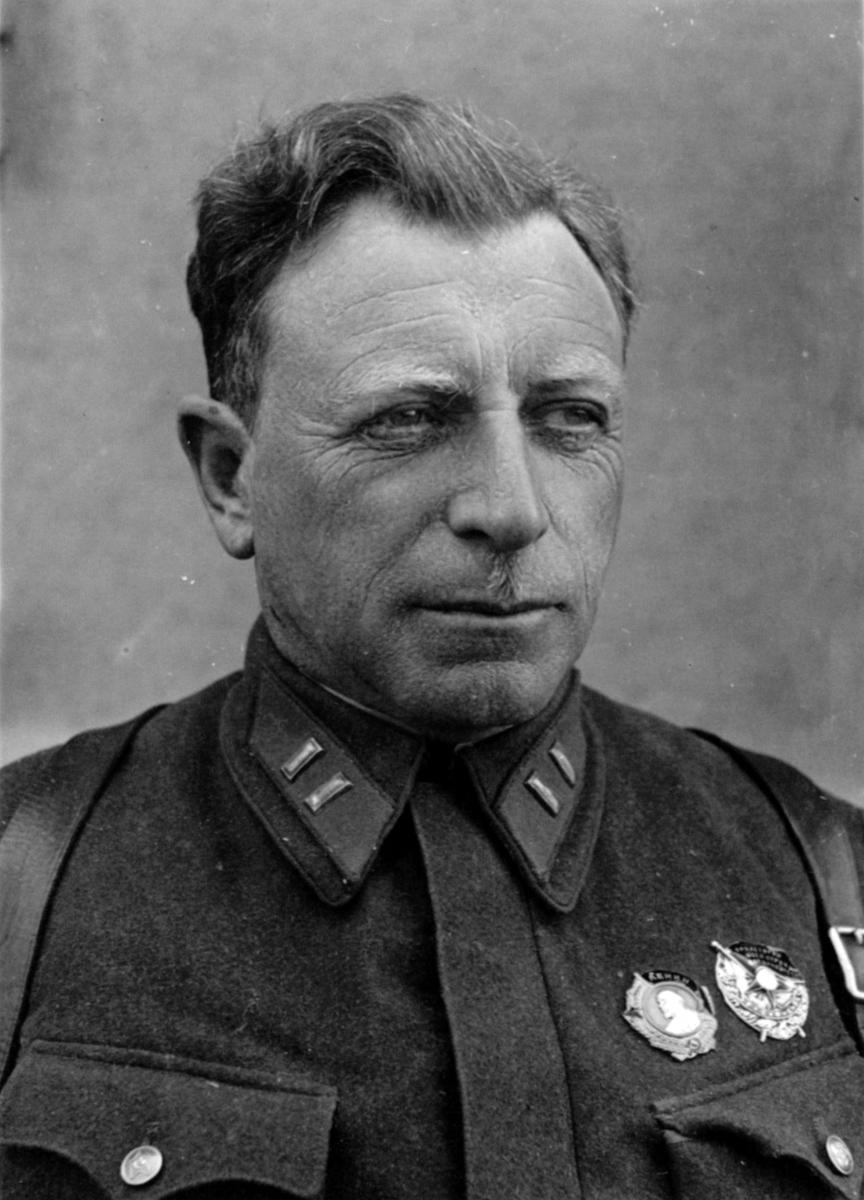 Major General Aleksei Flegontov
People shocked by the atrocities of the Nazis ran away into the forest to join partisans and help them as much as they could. 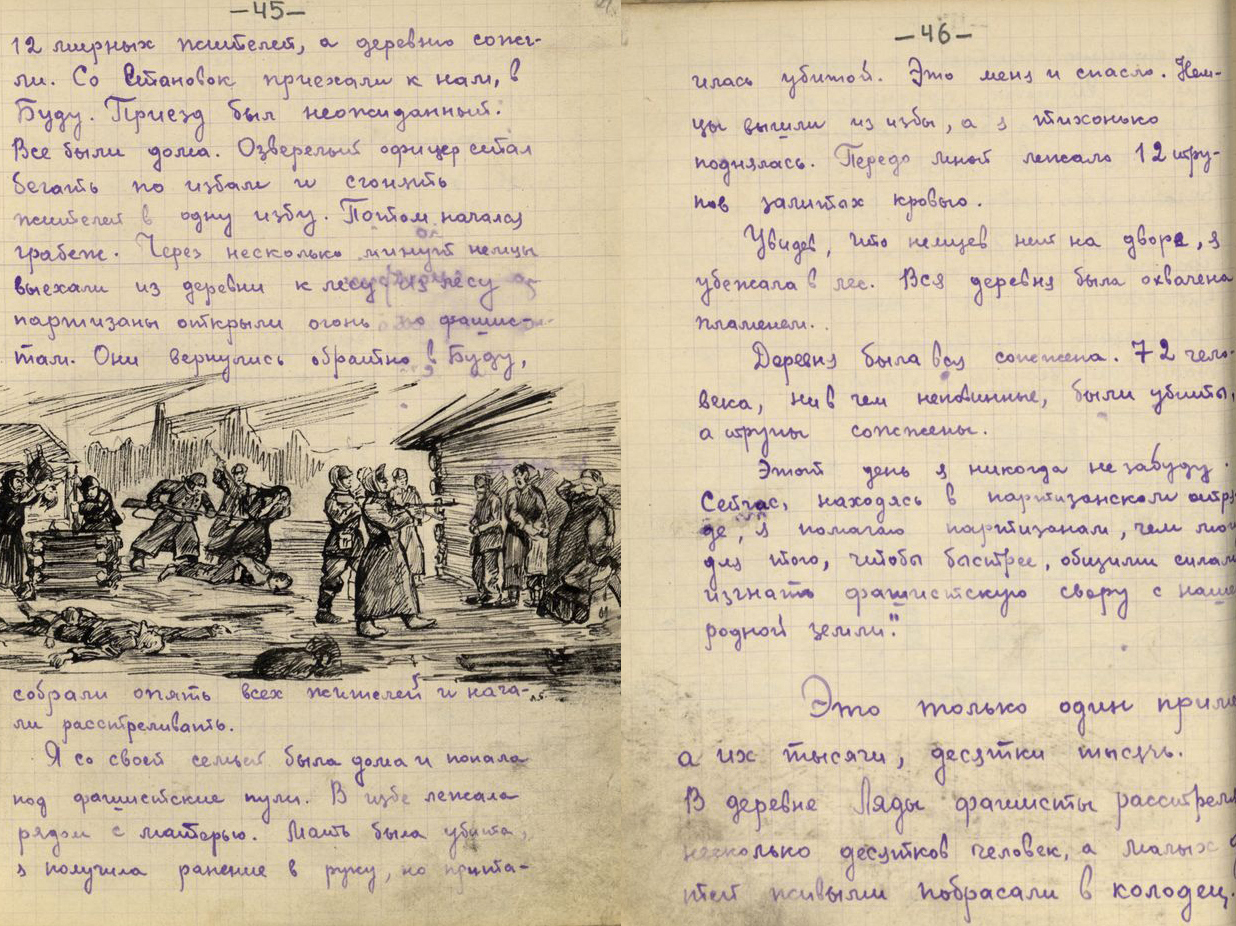 "I was at home with my family when fascists fired at our house. I was lying next to my mother inside the house. My mother was killed and I was wounded into the arm. I pretended to be dead, and this saved my life. The Nazis went out of the house and I quietly got up. There were 12 bodies lying in front of me, all covered in blood. There were no Nazis in the yard and I ran into the forest.

The whole village was set afire. The village was burnt to the ground. 72 innocent people were killed and their bodies were burnt. I will never forget that day. Today, as part of the partisan unit, I am doing my best to help drive off the fascist swarm from our native land as quickly as possible".

Recollections of the partisan Maria Luchenok published in the Red Banner journal of the Red Banner unit, For Motherland Brigade named after Aleksei Flegontov, Issue No.1, May 1943
"From the very first days of the Great Patriotic War Aleksei Flegontov was actively engaged in the organization of the partisan movement in Smolensk Oblast and then Moscow Oblast. On his initiative a partisan cavalry unit was set up to make raids deep into the rear of the enemy (Moscow - Cherven District, Minsk Oblast). During the raid the unit conducted five big operations to destroy the enemy's communications, including the headquarters of a German division.

"Upon arrival in Cherven District Aleksei Flegontov combined small groups of partisans into an entire partisan brigade… increasing the number of combat operations against the German invaders by tenfold."

Excerpt from the personnel jacket of Aleksei Flegontov, commanding officer of the For Motherland partisan brigade, 1947 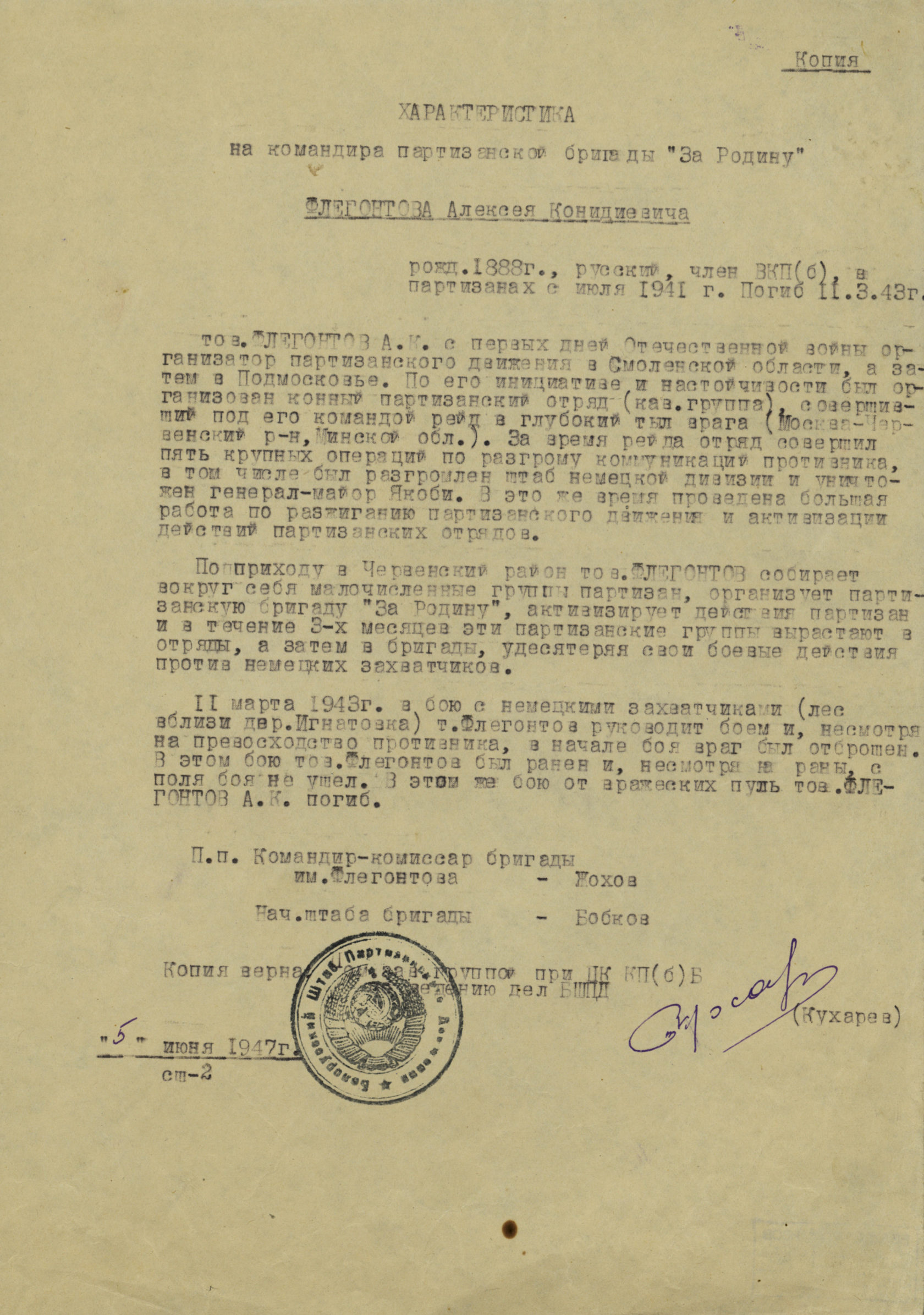 Brigade Commander Aleksei Flegontov died a hero's death while leading a rearguard unit in a combat operation to break out of a blockade orchestrated by German punitive forces in Osipovichi District on 11 March 1943.

The brigade did a fine job to invigorate a nationwide fight against fascism deep behind the frontline.

The partisan unit Boyevoi, which was initially established in Moscow Oblast and evolved into a brigade, carried out two major difficult raids in the enemy's rear. As part of these raids the partisans destroyed and damaged 92 railway cars, broke over 100 steam engines, blew up 64 railway and automobile bridges, destroyed 5 tanks and 155 vehicles, killed and injured over 3,000 soldiers and officers of the enemy.
Streets in the town of Cherven and the village of Zabolotye, Malorita District have been named after Aleksei Flegontov. A portrait sculpture of the brigade commander was erected in Cherven. The town's secondary school No.2 has been named after him as well. 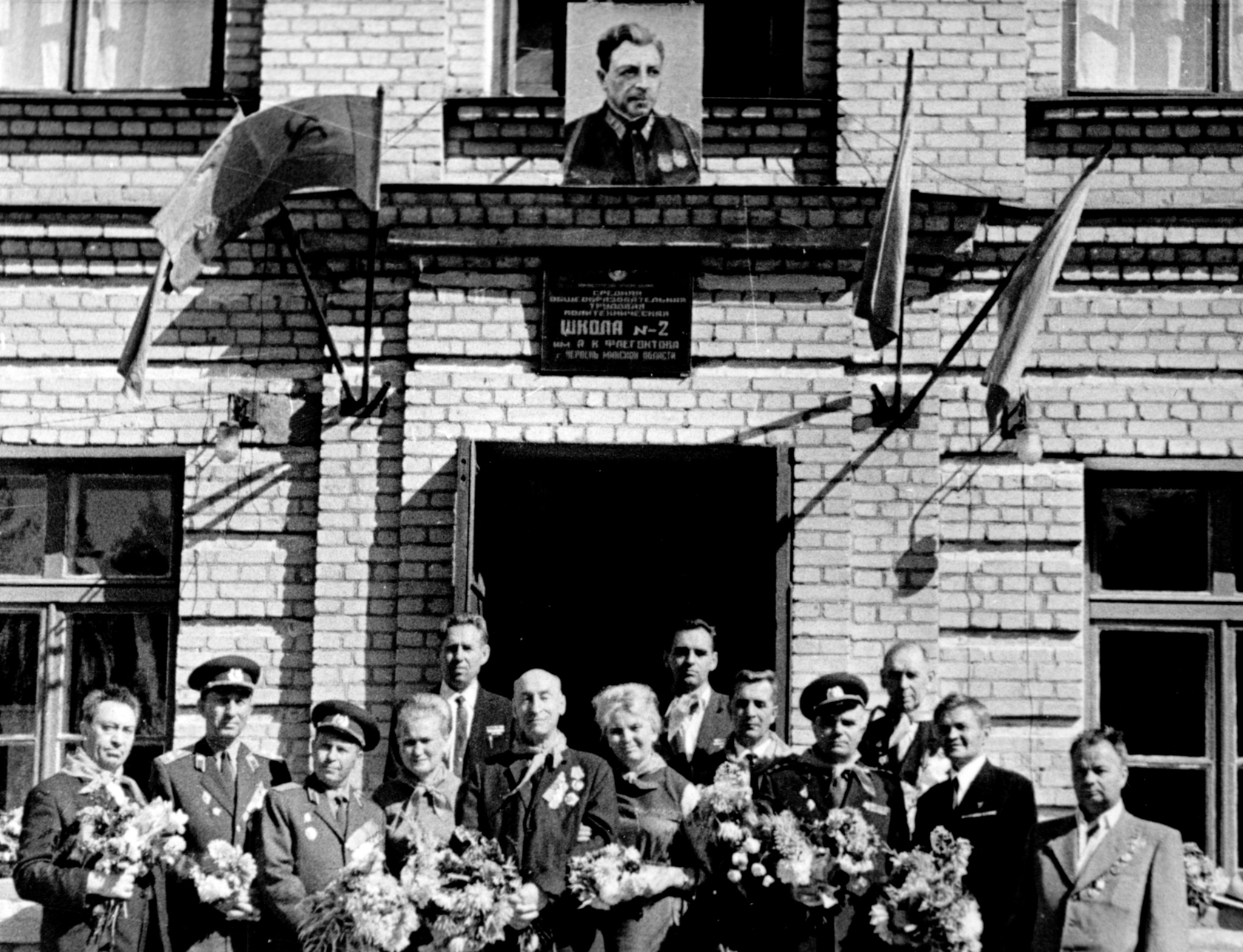 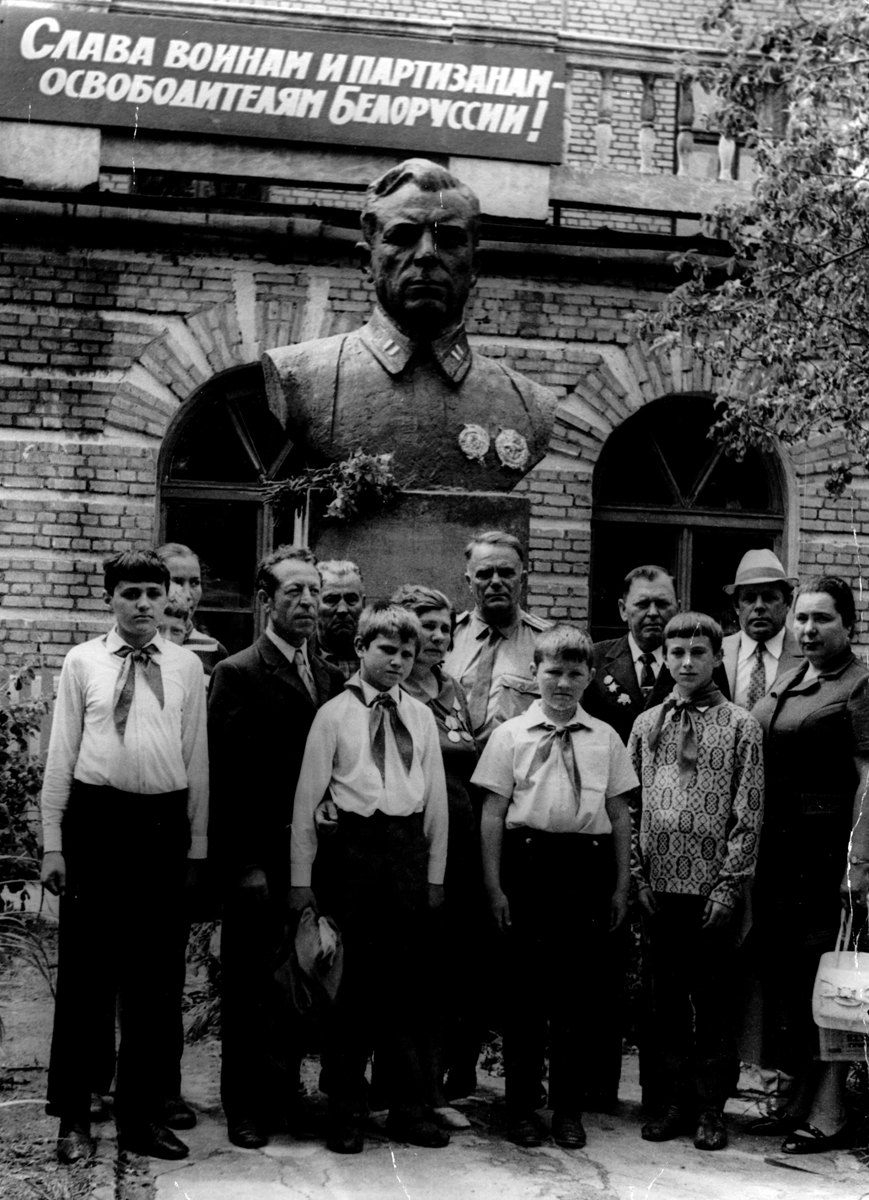 A group of former partisans of the For Motherland brigade named after Aleksei Flegontov attend festivities when Cherven's secondary school No.2 was named after the legendary brigade commander
A group of former partisans and students of Cherven's secondary school No.2 near Aleksei Flegontov's portrait sculpture, late 1960s – early 1970s
Red Banner handwritten partisan journal, Issue No.1, May 1943