ПАРТЫЗАНСКІ ЛЕТАПІС
ПАРТИЗАНСКАЯ ЛЕТОПИСЬ
PARTISAN CHRONICLES
PARTISANENCHRONIK
CRÓNICAS DE GUERRILLEROS
游击队史
PROJECT OF THE BELTA NEWS AGENCY
AND THE BELARUSIAN STATE MUSEUM OF THE GREAT PATRIOTIC WAR
Records were made wherever and whenever possible - in dugouts, between the battles, on wallpaper, exercise books, office books…

PAGE
1
Next page
Handwritten partisan journals were kept together with important documents. They contained facts and figures interspersed with stories about the daily grind, battles and heroes. Handmade 'books' were pepped up by pictures and unfailing sense of humor. They were circulated to raise morale. They were read to draw strength.

When partisans were encircled by the enemy, they put them into boxes with ammunition and carefully buried them into the ground or wrapped in a bag and hid in the forest. These unique documents survived the horrors of war to serve as evidence of those eventful days.
In 2019 Belarus marks the 75th anniversary of its liberation from the Nazi invaders. As part of the anniversary celebrations, BelTA and the Great Patriotic War History Museum are proud to present digitalized copies of handwritten partisan journals containing rare evidence of the war period.
The first Belarusian district capital – Komarin – was liberated by the Red Army on 23 September 1943. This date marked the start of the countdown of the country's liberation from the Nazi invaders. Belarus will celebrate the 75th anniversary of its liberation in 2019.

In the run-up to this remarkable date the BelTA News Agency and the Belarusian State Museum of the Great Patriotic War History are launching a joint project Partisan Chronicles. It is based on a unique collection of handwritten partisan journals that were surprisingly not lost or destroyed during the wartime. The materials cover the period of 1941-1944, from the beginning to the end of the partisan fight in the enemy rear.

Every week till 3 July 2019 BelTA will publish digests of these chronicles and upload their digital versions complementing the unique content with photos from its own archives.
A print shop of the partisan newspaper. Photo by BelTA
The Belarusian State Museum of the Great Patriotic War History boasts Belarus' biggest collection of handwritten partisan journals (248 items). The collection was awarded the status of historical and cultural value of international importance (Class 1). It features journals written by partisans from the regions of Bialystok, Brest, Vileika, Vitebsk, Gomel, Minsk and Mogilev. 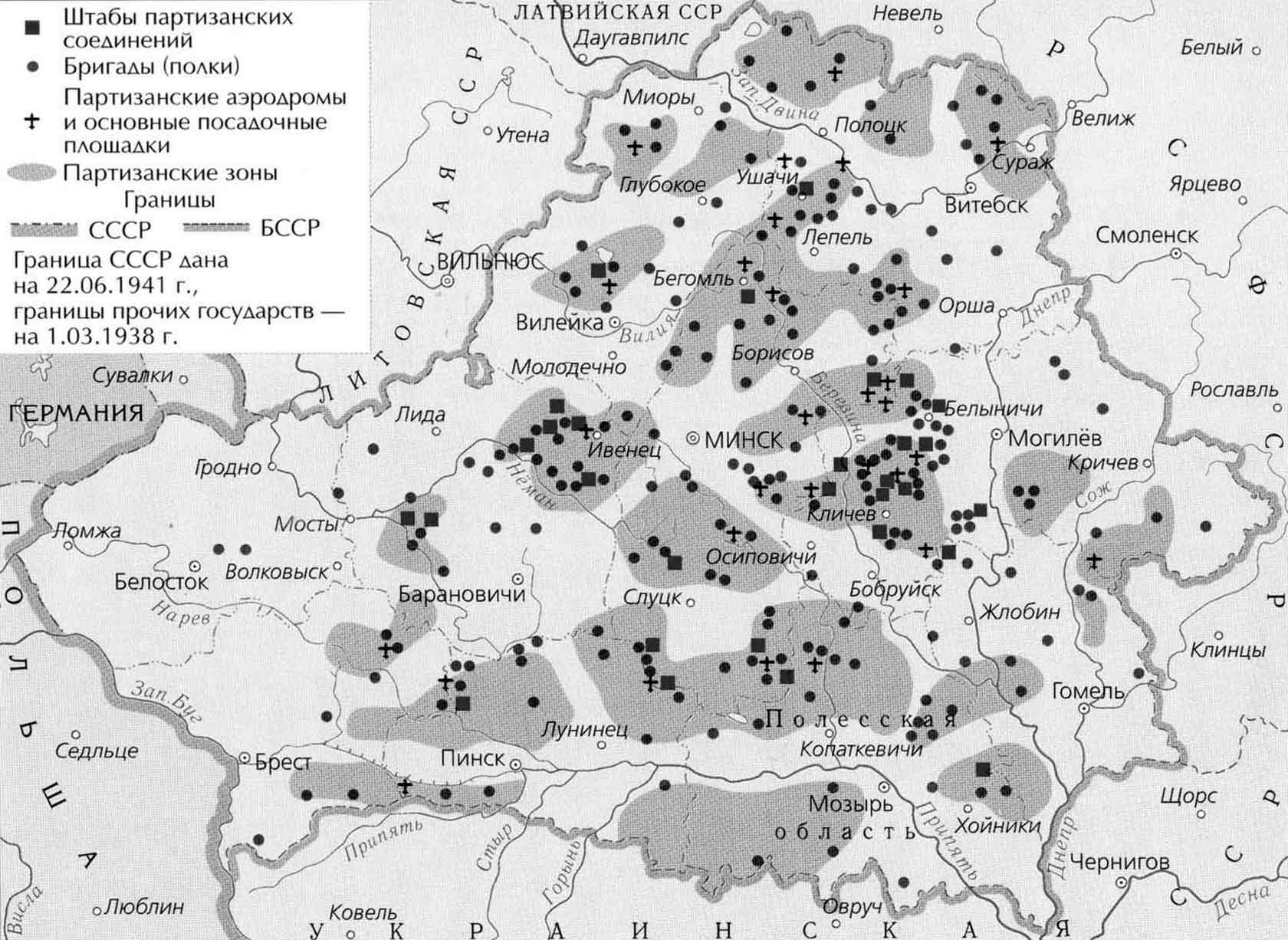 The journals are very informative and illustrative. They contain a great amount of information, including reviews of combat operations, stories, biographical assays, reminiscences of partisans. They demonstrate the national spirit and character and reflect the history and geography of nations. Each journal is a testimony to the multi-ethnic composition of partisan units that included representatives of many USSR republics and foreign countries.
Technically, partisan journals were improvised handwritten or typewritten exercise books and albums of various formats and volumes. Partisans used wallpaper, wrapping paper or Whatman drawing paper, exercise books and office books. The names of the journals clearly reflected their contents and purpose and often coincided with the name of a unit or a brigade. The journals were instituted by the Communist Party and Komsomol organizations, leaders of the partisan units and brigades. Editors were usually commissars or secretaries of party organizations of the partisan formations. Articles, stories, essays and satirical sketches were written by partisans. Handwritten journals were kept together with the documents of a unit or brigade.
Each handwritten journal cuts across various genres of literature and art. Journals contained over 3,000 illustrations. Their design was done by well-known Belarusian artists who fought in partisan units – G.Brzhozovsky, M.Gurlo, S.D.Lee, S.Romanov, V.Sukhoverkhov. Humor, wisdom and fantasy make these journals a valuable piece of literature and art. They recount feats, actions and values of people who came from different parts of the world, different walks of life and had a different mindset, but were united by their dedicated service to their country and people.
Brest formation. Members of the Frunze partisan unit read fresh newspapers during a break in between operations. Photo by BelTA
The history behind the first handwritten partisan journal was restored with the help of the materials kept by the Belarusian State Museum of the Great Patriotic War History. Among these materials were the recollections of its first publisher Vasily Bocharov. The former partisan and member of the underground movement, he experienced the bitterness of retreat and encirclement, captivity and repressions…
FIRST JOURNAL

Vasily Bocharov was in Grodno when the war broke out. After finishing refresher courses for political workers, he was sent to work in the editorial office of the Voin newspaper of the 85th Infantry Division as executive secretary, political instructor. The division started to retreat from the border near Grodno on the night of 28 June 1941. While retreating, it fought very hard exhausting the enemy forces. The weakened division units were sent further east. The property of the editorial office, including the typecases and a typewriter, were thrown into the Shchara River.

Shattered groups of soldiers made their way through forests to the east. Political instructor Vasily Bocharov was among them. Somewhere near the village of Staroye Selo (18km west of Minsk) he changed clothes with the help of the locals, hid documents and set off to Minsk where his friends provided him shelter. In Minsk he joined the local underground movement. Vasily Bocharov began working at the Storozhevskaya bakery where he became close with patriotic-minded workers. Afterwards they set up an underground group of ex-soldiers led by Colonel Vladimir Nichiporovich. As a result, the subversive work intensified. 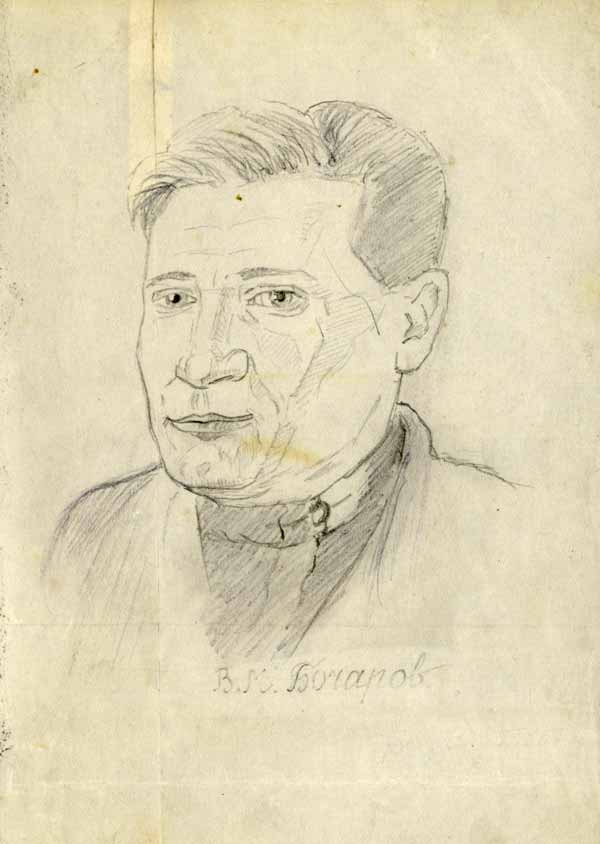 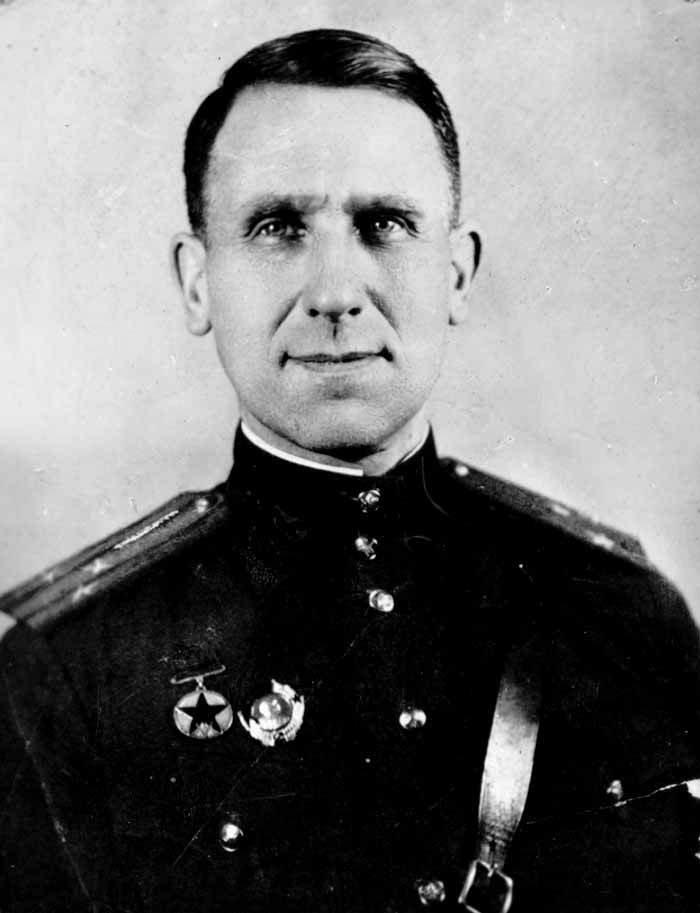 Vladimir Nichiporovich
The unit was deployed 8-10km away from the village of Klinok, Cherven District, Minsk Oblast. In the early spring of 1942 it redeployed to Mogilev Oblast. Political instructor Vasily Bocharov worked in the unit's command center. Its members performed the functions of privates or gunners during fighting with the Nazis. The partisan life began.

In January 1942, after the destruction of the Dukora peat mining plant, the intelligence reported that the plant had large stocks of flour, meat and other foodstuffs bound for Germany. The task was to destroy the plant, to seize the food and deliver it to the unit's headquarters. The operation was a success. Vasily Bocharov even managed to make stocks of handwriting and copy paper, notebooks so the unit's demand for paper was satisfied.
In December 1941, the group teamed up with the partisan units led by Nikolai Pokrovsky and A. Sergeyev and set up the 208th partisan unit led by Colonel Vladimir Nichiporovich. The unit was named after 208th Motorized Division of the 13th Mechanized Corps of the 10th Army, the banner of which was saved and hidden by a group of officers led by Vladimir Nichiporovich. The division was encircled during the defense battles in the Bialystok-Pruzhany area and was completely destroyed.
News reporter Vasily Bocharov was instructed to keep a diary of combat operations. That was the moment when he got an idea to issue a handwritten journal. At the suggestion made by commander Vladimir Nichiporovich at a meeting of the bureau of the 208th unit at the end of January 1942, a decision was made to issue an art and political journal called "Narodny Mstitel" (National Avenger). Vasily Bocharov was appointed editor. The editorial board comprised Politburo secretary Boris Byvalyi, political instructor, historian Vladimir Yudin, and partisan political instructor P. Deyev who worked as a journalist before the war and boasted beautiful handwriting. The design for the journal was developed by partisan, machine gunner Misha (Muhamed) Baibekov. The first issue of the journal saw the light in February 1942. It was a notebook made of sheets of wrapping paper and school exercise books.
Partisans are firing mortar at the Nazi garrison. Photo by BelTA
Editor of the journal Vasily Bocharov recalled:

"…the resistance and the life in the enemy's rear were the main inspiration for partisans. Partisans would read the stories about every warfare operation over and over again. There was a queue to read the journal, and when some sub-unit kept it for too long, others expressed discontent. There was a strict schedule for the journal to be transferred from sub-unit to sub-unit. Each episode described in the journal was close and dear to the national avengers. In some stories, they seemed to see themselves, re-evaluated their steps and actions of their compatriots, learned how to destroy the enemy, and recalled their mistakes ... a battle is a battle ... and not all the battles against the Nazis ended in our favor. There were victims and it was hard for partisans to recover from the death of their comrades-in-arms. The journal featured a story about partisan intelligence agent Semyon Makarov, who, making his way back from the mission on a frosty February night of 1942, fell into an ambush along with his comrade-in-arms. The soldiers were wounded and took shelter in a roadside shed. Lieutenant Makarov ordered junior V.Strelsky to bring intelligence reports to the partisan unit. He himself stayed and fired back to the last cartridge.

The journal recorded a detailed account of many events, including the heroic battles and daily lives of the partisans. The journal's humor pages under the heading "A Good Shot" included jokes, sharp critics, keen satire, and Misha Baibekov's catchy sketches and cartoons".
Thumbing through the pages of the first journal National Avenger, the reader sees catchy headlines. Every article, an essay, or a note is an invaluable record of the partisans' lives and the fight for the independence of the Motherland.

Next page
The website assets or a selection of assets, parts of the design and the layout can be used only upon authorization of the copyright holder and with reference to the source: www.belta.by
© BelTA News Agency, 2018
© Belarusian State Museum of History of the Great Patriotic War, 2018